APPALACHIAN MOUNTAINS, the principal mountain system of the eastern United States and Canada. Roughly paralleling the Atlantic coast from the island of Newfoundland to central Alabama, the Appalachians are a nearly continuous chain of mountain ranges. Prominent among them are the Newfoundland Long Range Mountains; the Notre Dame and Shickshock mountains on the Gaspe Peninsula, Quebec; the Green, White, and Taconic mountains of New England; the Catskills in New York; the Lehigh and South mountains in Pennsylvania; the Blue Ridge, extending from southern Pennsylvania to Tennessee; and the Great Smoky Mountains on the North Carolina-Tennessee border.

Despite their great length from northeast to southwest, the Appalachian Mountains are a relatively narrow mountain system, rarely exceeding a width of 100 miles (160 km). Neafly parallel to them on the west, from Pennsylvania southwestward, are the even-crested ridges of the Allegheny and Cumberland mountains.

Few areas in the world have such extensive forests of mixed hardwoods and softwoods as the Appalachians. The most colorful of their flowering plants and shrubs are the mountain laurel, flame azalea, and rhododendron. The U.S. government has done much to preserve the natural beauty and wildlife of the Appalachians. Two great national parks are located on Appalachian slopes—Shenandoah, in Virginia, and Great Smoky Mountains. There are also a number of national forests, including those in the White, Green, Allegheny, and Cumberland mountains; Pisgah and Nantahala in North Carolina; and Cherokee in Tennessee and North Carolina. The Appalachian Trail for hikers and campers extends more than 2,000 miles (3,200 km) from Maine to Georgia.

The Appalachians have the world’s largest deposits of asbestos, in Quebec; of anthracite coal, in Pennsylvania; and of bituminous coal, in West Virginia, Pennsylvania, and Kentucky. Asbestos deposits in Vermont make that state the leading United States producer of asbestos. Iron ore is mined extensively in the Appalachian region of New Jersey and Pennsylvania. The best United States marble is quarried in Vermont, Georgia, and Tennessee, and Vermont and Georgia lead in granite production. Semiprecious stones are found in the neighborhood of Asheville and Spruce Pine, in North Carolina. There are also small deposits of gold, silver, copper, and lead in the Appalachians. 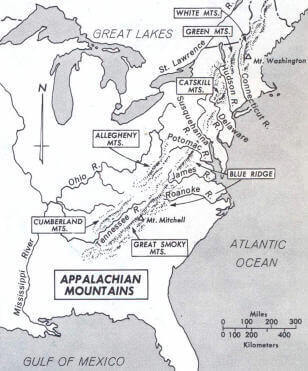 East of the upper Connecticut River valley are the White Mountains of New Hampshire. In Massachusetts and Connecticut this same range has been so subdued by stream erosion and glaciation that the region appears to be an upland. In New Hampshire, for example, Mount Monadnock rises 3,165 feet (965 meters) above sea level, while in Massachusetts, Mount Watatic and Mount Wachusett, true monadnocks (mountains of resistant rocks standing above a plain), with altitudes of about 2,000 feet (610 meters), rise only a few hundred feet above the upland surface. In the Presidential Range in central New Hampshire, the highest mountain is Mount Washington (6,288 feet; 1,920 meters), while Mount Adams, Mount Jefferson, Mount Madison, and Mount Monroe have peaks above 5,000 feet (1,520 meters).

West of the Connecticut Valley in Vermont, Massachusetts, and Connecticut are the old worndown mountain ranges known in Vermont as the Green Mountains, a counterpart of the Blue Ridge in the South. In Massachusetts and Connecticut they are called the Berkshire Hills. The general elevation in Vermont ranges from 3,500 to 3,800 feet (1,070-1,160 meters), although Mount Mansfield is 4,393 feet (1,340 meters) high. Mount Grey lock in the Berkshire Hills of western Massachusetts has an elevation of 3,491 feet (1,064 meters), although 1,500 to 2,300 feet (460—700 meters) is the general range of elevation for the Berkshires. West of the Berkshires and the Green Mountains and north to Brandon, Vt., are the Taconic Mountains, with heights of 1,800-2,000 feet (550-610 meters).

The Blue Ridge is divided into two parts by the Roanoke River. North of the Roanoke the term “ridge” is descriptive, because at numerous places there is a central ridge with subordinate ridges grouped about it. South of Roanoke, Va., to near Gainesville, Ga., is a prominent scarp called the Blue Ridge Front or Scarp. The crest, with an altitude of 2,500 feet (760 meters) near Roanoke, increases until it is 4,000 feet (1,220 meters) at Blowing Rock, N.C. It then decreases until it is almost 1,000 feet (305 meters) less at Mount Oglethorpe, near Gainesville. Massive mountains and high peaks in Tennessee and North Carolina contrast strongly with the northern Blue Ridge. Mount Mitchell, in North Carolina, is the highest peak in the eastern United States, with an elevation of 6,684 feet (2,040 meters).

The western front of the Blue Ridge province is known as the Unaka Mountains. Included in this group are the Tennessee mountains known as Chilhowee, Stone, Bald, Holston, and Iron. Best known of all are the Great Smoky Mountains on the North Carolina-Tennessee border. Some of the peaks in Tennessee, with their elevations, are Clingmans Dome (6,642 feet; 2,024 meters), Mount Le Conte (6,593 feet; 2,010 meters), and Mount Guyot (6,621 feet; 2,018 meters).

Geology of the Appalachians.

Geologic study has shown that the differences in the ages of the rocks of the Appalachians are not as fundamental as was once thought. Rocks previously called Precambrian are now known to be Paleozoic in age. It is more important to divide the rocks into areas of sedimentary and crystalline rock. In the Blue Ridge are found Precambrian metamorphic and igneous rocks and early Paleozoic rocks that are strongly folded, faulted, and metamorphosed. In the Allegheny and Cumberland mountains rocks are sedimentary. They range in age from Lower to Upper Paleozoic. Here carbonate rocks are plentiful, and certain sandstone formations are prominent. In northern West Virginia and adjacent Pennsylvania is an area of Permian rocks.

Wind gaps, formerly water gaps, are important in explaining the geology of the Appalachian ranges. Their depth and distribution may be interpreted as indicating former peneplanation. Examples are Snickers, Ashby, and Manassas gaps south of the Potomac and Cumberland Gap at the juncture of Kentucky, Virginia, and Tennessee.