ZEUS; in ancient Greek religion, the chief deity. He was known to the Romans as Jupiter (Juppiter) and to Asiatic Indians as Dyaus pita. In origin he was an Indo-European divinity—a weather god enthroned on mountain summits, which are watched for indications of weather, and the ruler of the sky ( the name means “sky” ), where atmospheric phenomena are observed. As god of the bright sky, he controlled the sun, moon, stars, and planets; as god of the dark sky, he caused thunder, lightning, clouds, winds, dew, rain, hail, sleet, snow, comets, meteors, and meteorites.

Zeus was the son of Cronus (Kronos) and Rhea, and brother of Hestia, Demeter, Hera, Hades, and Poseidon. He married successively Metis (Counsel), Themis (Law), and Hera (Lady), of whom the last was his sister. By more than 115 mistresses, both mortal and ‘immortal, he had over 140 offspring, such as the Graces, the Muses, the Seasons, and numerous kings and queens, heroes and heroines, who were considered demideities. His divine children, who ranked as Olympian divinities (except Persephone), were Apollo, Ares, Artemis, Athena, Dionysus, Hebe, Hephaestus, and Hermes. 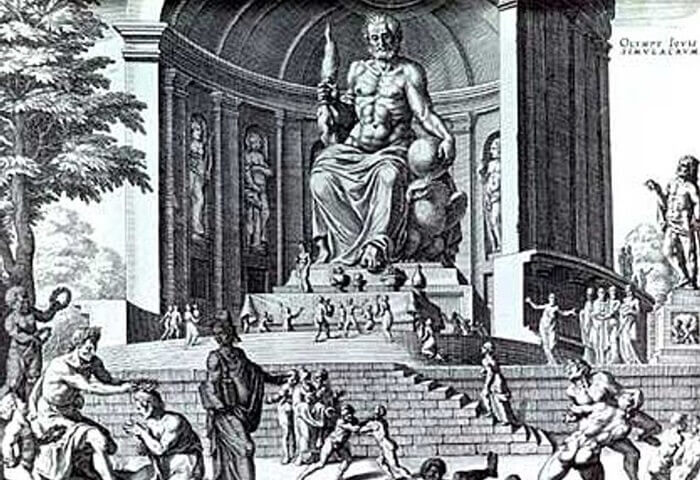 Homer, the earliest Greek writer to mention Zeus, calls him “father of gods and men,” a designation to be interpreted as signifying a paterfamilias, the father of a family, whose members owe obedience to him as director of their conduct and upholder of customary law. From this conception came several of his more than 685 recorded epithets, such as Ktesios (protector of the household), Herkios (defender of the courtyard), Hikesios (supporter of suppliants), and Xenios (upholder of hospitality). Since the family was the foundation of the state, it was a short step to associate Zeus with care of the city-state; hence political epithets, such as Polieus (guardian of the city), Eleutherios (vindicator of liberty), Agoraios (advocate of the assembly), and Boulaios (champion of tie council). From his role as overseer of the state developed his role as observer of conditions among mortals; hence moral epithets, such ai Epopsios (observer of all things), in which capacity he castigated criminals and avenged injured persons, and Horkios (maintainer of oaths), wherein he punished violators of the sanctity of their sworn pacts.

As Panomphaios (author of all divination), Zeus was the primal source of prophetic power. As Soter (savior), he saved persons, particularly sailors and seafarers, from peril. Other epithets referred to the many places where Zeus was worshiped throughout the Hellenic world. 01 these the most noted were Diktaios (of Mount Dikte in Crete, where he was born); Lykaici (of Mount Lykaion in Arcadia, where he was reared); Olympios (of Mount Olympus in Thessaly, where he dwelt); Dodonaios (of Dodona in Epirus, where his oracle was the oldest oracle in Greece); Ammort or Ammonios (of Ammonium, now the Oasis of Siwa, in Egypt, where Alexander the Great of Macedon was hailed in 332 b.c. as the son of Zeus Ammon by the priests of this oracular shrine); and Olympikos (of Olympia in Elis, where, from 776 b.c., tie Olympic games were held quadrennially in his honor and where, in 457 b.c., Phidias completed his collosal statue of Zeus Olympikos, one of the Seven Wonders of the World, in the Olympeiim or Temple of Zeus).

Many important myths, with numerous variations, concerned Zeus. Cronus, lis father, was destined to be overthrown by one d his sons and therefore customarily swallowed his newborn male children. Rhea, Cronus’ sister-wife, consulted Uranus (Heaven) and Gaea or Ge (Earth), their parents, as to how the unborn Zeus might be saved. For her lying-in they sent her to Crete, where she bore Zeus, concealed him in a cave, and substituted a stone, wrapped in swaddling clothes, for Cronus to swallow. The infant Zeus was tended by nymphs and nourished on milk given by a goat and on honey gathered by bees. Weapon-clattering Curetes (semidivine beings) danced around him and by their noise prevented his father from hearing tie babe’s cries.

After he had reached manhood, Zeus plotted with Poseidon and Hades when Cronus had been persuaded by trickery to disgorge—to dethrone their father. This attempt induced war with the Titans, who supported their brother Cronus. Zeus received aid from the Cyclopes, whom he had liberated from the bonds put upon them by Cronjs and who in gratitude armed their deliverer with thunderbolts. He also had the help of certain hundred-handed giants. With these allies he conquered the Titans and then imprisoned them with Cronus in Tartarus (Hell). Thus Zeus won domination of the world, which he then divided by lot with his brothers: Poseidon obtained the sea, Hades received the underworld, Zeus secured the sky, while the earth was held as common property.

Above all, Zeus was the supreme ruler, the most powerful among the immortals, the protector of regal power, the custodian of law, and the guardian of morality, his assistants being the goddesses Dike (Justice), Themis (Law), and Nemesis (Retribution). According to his own choice, he assigned a good or evil lot to mortals. He was armed with thunder and lightning; the shaking of his shield produced storm and tempest. The eagle, the oak, and the mountain peaks were sacred to him. His sacrifices usually were goats and cattle.

Artists normally portrayed Zeus as a muscular, majestic elder, with abundant locks and bushy beard, wearing a wreath of olive or oak leaves on his head, and holding in his hands various objects, such as a figure of Nike (Victory), a scepter, a cornucopia, and thunderbolts. He is often pictured with an eagle standing at his feet.