What is gold? What is the symbol of gold, Physical anc chemical properties of gold element. Info on gold. 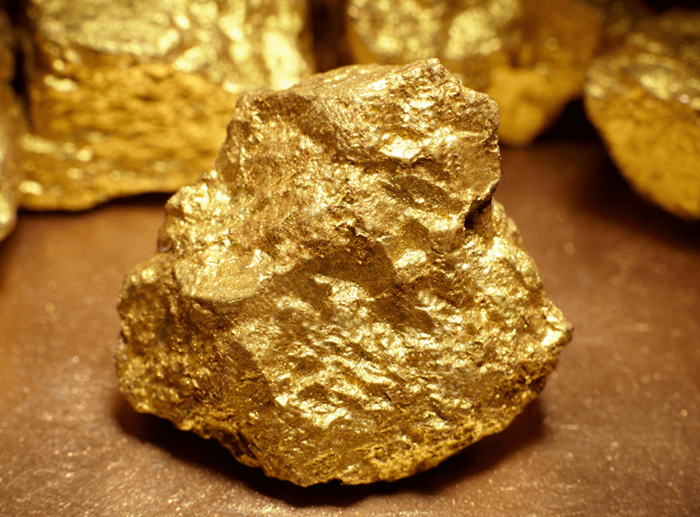 GOLD; symbol Au, is a soft, bright yellow, metallic element. Because of its beauty and because it do es not corrode or tarnish, it has been valued by man since prehistoric times. It was particularly important to early man because it could be obtained as a free metal without complex separation techniques. Furtherrnore, it could be easily worked.

In fact, gold has the best working qualities of any metal. it can be beaten to a thickness of 5 millionths of an inch. One ounce of gold can be beaten out to cover an area of 300 square feet. Because it is so soft, gold is usually alloyed with other metals to improve its wearing qualities.

The purity of gold is expressed in terms of its fineness, or by the karat system. In the karat system the percentage (by weight) of gold in an alloy is denoted as a fraction of 24. Thus pure gold is 24 karat gold, and IS karat gold is 1%4, or 75%, gold. Fineness refers to the parts of gold per 1,000 of the alloy. Therefore, a fineness of 500 would represent an alloy with 50% gold. The most common uses of gold are for decoration, as in jewelry, and as a un it of monetary exchange. Since ancient times gold has generally been the most readily acceptable form of currency. However, the use of gold coins was discontinued, for the most part, during the period between World Wars I and II.

The only naturally occurring isotope of gold is 197Au; however, 19 isotopes have been produced artificially, ranging in mass number from 185Au to 203Au. These isotopes are radioactive and have a wide variety of half-lives ranging from a few seconds to 199 days.

Pure gold and many gold alloys are nonmagnetic, while an alloy of gold and manganese is somewhat magnetic, and some alloys of gold with irorı, nickel, or cobalt are ferromagnetic. Crystals of gold most commonly are face-centered cubic, but they also may be octahedral or dodecahedral.

Gold is the noblest (most inert) of the metallic elements and exhibits great stability and resistance to corrosion. In addition it is the most ductile and malleable of the metals. It is also a good conductor of both heat and electricity.

Gold is generallv resistant to attack by the simple mineral acids, except for selenic acid. But it may be dissolved in hydrochloric acid in the presence of oxidizing materials such as oxygen, cupric or ferric ions, or manganese dioxide. Gold can also be dissolved by dry or aqueous chlorination and by alkaline cyanide solution-both in the presence of oxygen. Aqua regia, which is one part nitric acid to three parts hydrochloric acid, is commonly employed for putting gold into solution. After careful removal of the nitrates, the solution contains Au+3 in the form of the chloride.

In the massive form, gold is resistant to attack by hydrogen, nitrogen, sulfur, selenium, and oxygen. Tellurium, however, reacts with gold to fonn interrnetallic compounds. The addition of moderate amounts of silver or other metallic impurities, such as copper, iron, or nickel, to gold does not markedly increase its proneness to corrosion. However, high percentages of these constituents will increase its eorrosion susceptibility.

Gold is soluble to some extent in mercury, and care must be taken to prevent contact of gold jewelry with this material. Proper heating will sometimes free gold from contamination with mercury.

In simple solution gold is most often in the form of complex ions as Au+3, However, gold in solution may readily be reduced to the metallic form, and great care is required to prevent this from occurring, even mildly reducing substances, such as dust, can result in reduction to the metal. Even tightly stoppered gold solutions stored for a period of months may for reasons unknown decompose to some extent, with the resultant precipitation of tiny metallic gold particles, Great care must be exercised in quantitative determinations of gold, since the element can be precipitated in colloidal form, which is difficult to detect visibly, In colloidal form, gold can pass through a filter.