ACID, a term derived from the Latin word acidus, meaning “sour.” Two related terms are the Latin words acetum, referring to sour wine, and the verb aceo, which conveys the idea of becoming sour.

The early deseription of an acid as a substance having a sour taste is entirely inadequate. Many acids cannot be safely tasted unless extremely dilute. The corrosive properties of acids also vary greatly, as do their effects on dyes such as litmus and cochineal. For many years an acid was defined as a substance that would react with a metal hydroxide to form water and a salt. Some acids were also deseribed in terms of their reactions with aetive metals to produce hydrogen and a salt.

The modern concept of an atom as being made up of a positive nucleus surrounded by one to over 100 electrons has made possible a more complete and satisfactory concept of what an acid is. The simplest of the elements is hydrogen. Its nucleus is a single proton, a positive partide, around which moves a single electron, a negative partide. Hydrogen combines with other elements or groups of elements to form compounds b>^ either sharing or giving up entirely its single electron. By so doing, the positive charge of the hydrogen nucleus (the proton) is held to the negative part of the compound because of the electron that the hydrogen gave up or is sharing. When a compound containing hydrogen has a measurable tendeney to give up protons, it is called an acid.

Since water is the solvent most commonly used in ehemistry, its strueture and chemical properties must be considered before the nature of an acid can be understood. Water is made up of two atoms of hydrogen and one of oxygen, and is represented by the formula

. Water is practically neutral and has a very high electrical resistance as long as it is free of dissolved substances. However, it does break up to an extremely slight extent into ions, or charged particles, one of the hydrogen nuclei or protons of water separating and leaving the negatively charged hydoxide ion

. The extent to which water alone is able to exert enough energy so that one water molecule can pull a proton from another molecule is so little that in one liter, or about 1,000 grams of water, there is only one ten-millionth of a gram of hydrogen ions.

ions in water solution are called bases. Water is thus both a base and an acid, but its tendeney to break up is so small that for practical purposes water may be considered neutral. The reaction between acids and bases is the combination of the proton of the hydrogen ion and the hydroxide ion to form water. 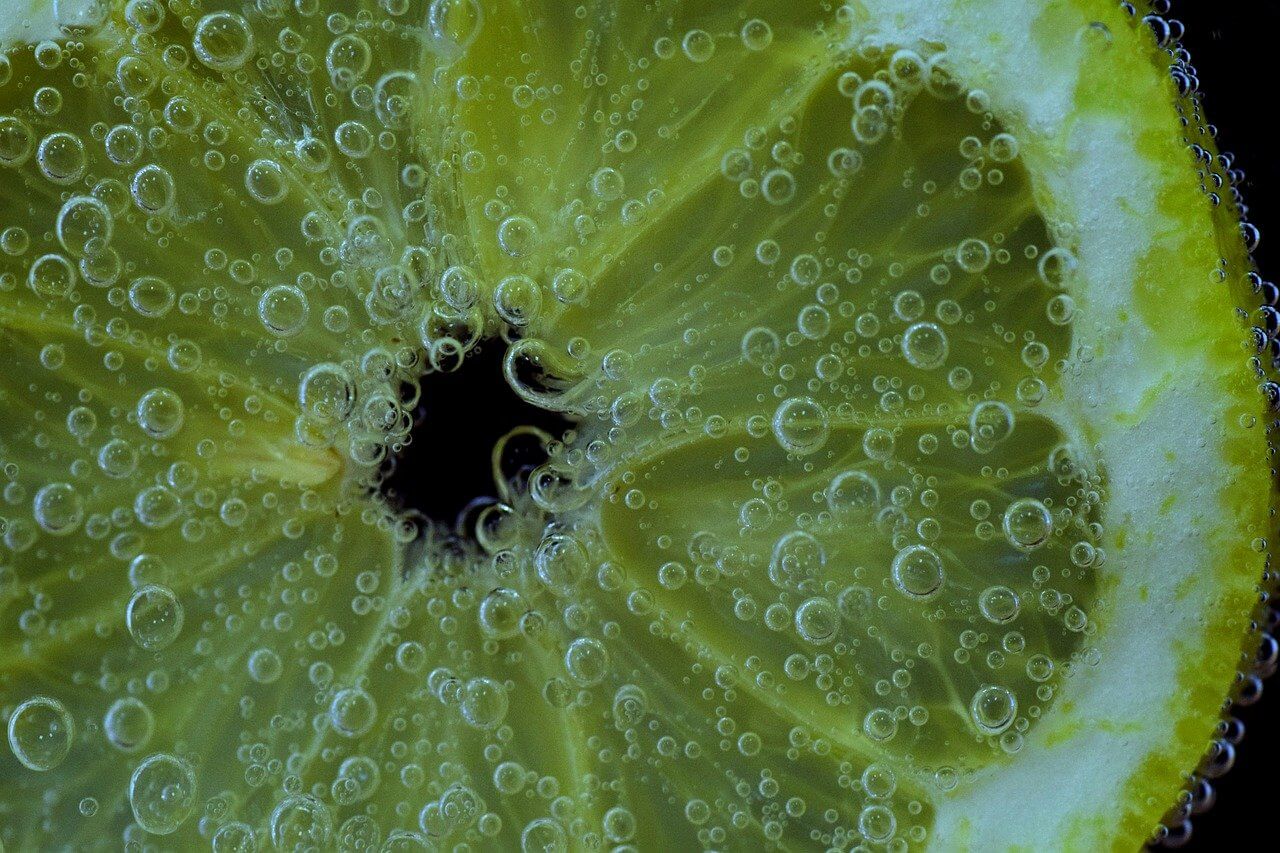 The proton does not exist in free form in water or in acid solutions, but is attached to at least one molecule of water. The ion formed from a water molecule and a proton,

, is called a hydronium ion. Theoretically, any substance that contains hydrogen might be regarded as a potential acid, but there are many thousands of nonacids in which hydrogen is directly attached to carbon.

The tendeney of a compound to give up protons is measured qualitatively by the term “strength.” Strong acids are those in which this tendeney amounts to complete dissociation in water solution into hydrogen ions and negative ions made up of the remainder of the compound. Weak acids have only a slight tendency to liberale protons. A typical strong acid is hydro-chloric acid, HCl. A gram molecular weight of this acid, approximately 36.5 grams in 1,000 grams of water, is considered as being entirely composed of

. The only reason that such an acid does not conduct the theoretical amount of electric current is that oppositely charged ions attract each other and thus interfere with ion flow.

Vinegar, which contains the mild acetic acid, has been known to mankind for many centuries, being referred to in the Old Testament (Numbers 6:3 and Proverbs 10:26). Hannibal is said to have attempted to split the Alpine rocks with acetic acid obtained from vinegar in order to permit the passage of his elephants, and Cleopatra is credited with dissolving a pearl in wine. Both legends are given little credence by modern chemists.

The alchemists of the Middle Ages had no stronger acid with which to work than acetic acid. Ordinary vinegar from apple cider or wine contains 5 to 6 percent of this acid, which means that it had to be concentrated by evaporation and therefore had many limitations as an active acid. During the 8th century Geber, an Arabian physician, is credited with the discovery of nitric acid and the mixture of nitric and Hydrochloric acids known as “aqua regia” because of its ability to dissolve the noble metal gold. Credit for the discovery of sulfuric acid in the lOth century is given by some authorities to another Arabian physician, Rhazes, and by others to the Benedictine monk Basil Valentine.

The simplest type of acid is made up of two atoms, hydrogen and a non-metal such as ehlorine. Such acids are called binary acids. Hydrogen chloride, HC1, a gas at ordinary temperatures, is very soluble in water, and its solution is known as hydrochloric acid. Other ehlorine acids contain oxygen. These acids illustrate how a series of acids with the same elements in different proportions are named.

, is dibasic, and phosphoric acid,

, is tribasic. Sulfuric acid is a strong acid, one hydrogen nucleus being separated completely and the second to a considerable extent, the ions formed being

. Phosphoric acid, on the other hand, gives up its first hydrogen atom fairly readily, the second slightly, and the third hardly at all. A typical weak acid is acetic acid,

. Three of its hydrogen atoms are attached to carbon and are not separated in water solution, and the hydrogen atom bonded to the oxygen is given up only to a very moderate extent. The reaction produets of acids and bases are known as salts and are discussed elsewhere. 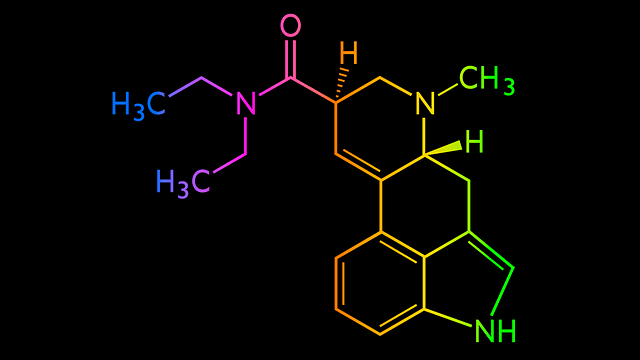 Inorganic or mineral acids are commonly named with special reference to the dominating elements that they contain. As already noted, the compound hydrogen chloride, when dissolved in water, is called hydrochloric acid, and this method is followed in naming the other halogen acids, hydrofluoric acid, HF, hydrobromic acid, HBr, and hydriodic acid, HI. An example of an acid in which the names of two elements are ineluded is hydrofluosilicic acid (commonly known as fluosilicic acid),

Oxygen acids do not contain any part of the word “oxygen” in their name but do indicate in their name the element other than hydrogen and oxygen that enters into their composition. The special terminology that becomes necessary when several acids contain different proportions of hydrogen, oxygen, and another element has been illustrated earlier with the oxygen acids of chlorine. When there are only two such acids, the name of the one containing the smaller amount of oxygen ends in “-ous.”

The other, with more oxygen, ends in “-ic.” An example of the pairing of two acids of this type is the two sulfur-oxygen acids, sulfurous acid,

. The “-ic” acids have salts which end in “-ate.” The sodium salt of sulfuric acid is sodium sulfate,

. An acid regarded as being derived from another by loss of water may have the prefix “pyro-.” Pyro-sulfuric acid,

, represents the result of the removal of one molecule of water from two molecules of sulfuric acid:

Organic acids, all of which contain carbon as the principal element, have a variety of names, depending largely on their origin, by which they are known in industry and in less exact chemical language. There is, however, a defmite and rigid system of naming organic compounds, known as the Geneva Nomenclature, which is based on structure and particularly on the number of carbon atoms present. Acetic acid,

, is thus known as ethanoic acid, since it has the same number of carbons as the hydro-carbon ethane,

, to which it is related. Simpler organic acids are so well known that their earlier names are used even in highly academic publications, but the advantage of the Geneva system becomes apparent in comparing the names of the two following acids.

The Geneva name in each case contains the stem of the Greek words for “five” and “six” and represents the numbers of carbon atoms present.

Organic acids may contain two or more carboxyl, or acid, groups in different parts of the molecule. Such acids may also contain other groups, such as the hydroxyl group, OH, which is characteristic of the alcohols. Since this group is linked directly to carbon, it is not ionized and alcohols are not bases.

When one or more but not all of the ionizable hydrogens of a polybasic acid have been replaced by a metal or an organic radical, the compound is called an acid salt and continues to function as an acid. An example of this is sodium hydrogen sulfate,

, which is still a strong acid, the ion

When hydrogen of an acid, either organic or inorganic, is replaced by an alkyl or aryl radical such as —

, the compound is not a salt but an ester. The ester does not ionize as does a salt and consequently does not conduct electric current as do practically all salts.