Who is Donatello? What did Donatello do? Information on Donatello biography, life story, works, sculptures and career. 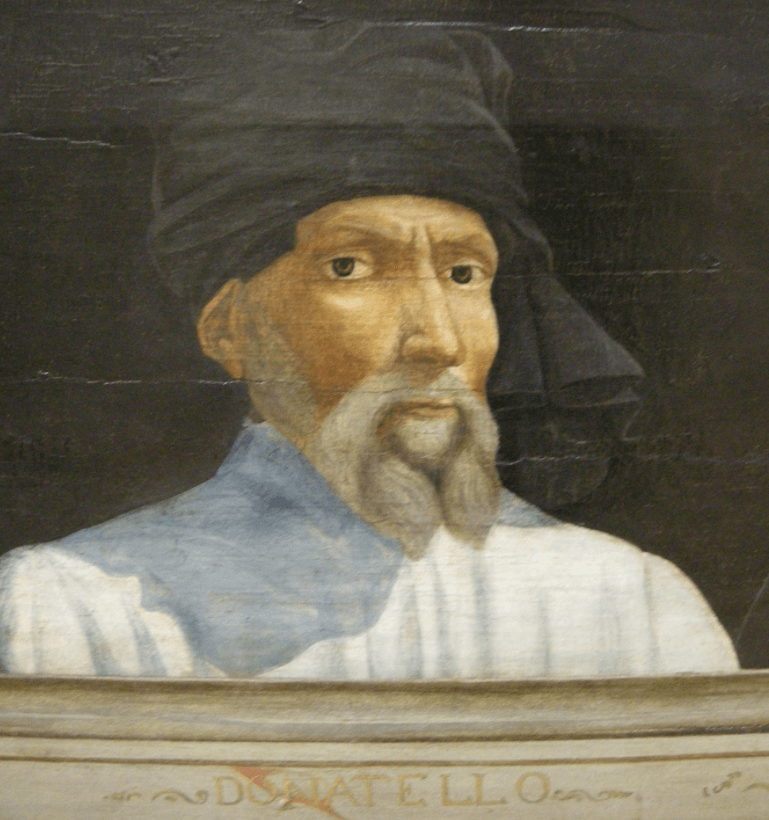 Donatello; (1386-1466), Florentine sculptor, who, with Lorenzo Ghiberti and Nanni di Banco, was one of the founders of Italian Renaissance sculpture. Of the three, Donatello most fully investigated such basic artistic problems of the time as the relationship of form to space and the opposing claims of realism and idealism. His strongly independent solutions of these problems exerted great influence on the general development of Renaissance art.

Precise details of Donatello’s personal life and early career are scarce. His real name was Donato; he was born in Florence, probably in 1386, the son of Niccolo di Betto di Bardo, a wool comber. Donatello was trained initially as a goldsmith, but at 17 he was working in the studio of Lorenzo Ghiberti, where he assisted in finishing the famous bronze north doors of the Baptistery in Florence. In 1407 he went to the workshop of the Duomo (cathedral), where the presence of Nanni di Banco and Brunelleschi did much to orient his style and interests.

The refined elegance of Donatello’s first authenticated work, the marble David (1408; Bargello, Florence), reflects his apprenticeship to Ghiberti and Nanni. Yet it also asserts Donatello’s greater concern for realism, a characteristic that continued to develop throughout his career. Other works of his early career in Florence are the series of monumental figures for the Duomoi and the Orsanmichele. A trip to Rome with Brunelleschi, probably in 1409, exposed Donatello to classical art with its use of movement and handling of light and shade. The result is apparent in his St. George (1415—1417; Museo Nazionale, Florence), executed for the Orsanmichele. Classical in attitude but not classicistic in style, the saint stands alert and tense, independent of all architectural support. A physical reality, involved with the space around him, he is also the ideal Renaissance champion.

In the relief St. George Slaying the Dragon (Orsanmichele), originally part of the base of the statue of St. George, Donatello introduced a revolutionary way of handling space. Although the carving is very shallow, it gives the illusion of great depth through subtle and varied surface modulations. It is one of the early Renaissance experiments with perspective in relief sculpture, although its depth is determined by shades of light and dark rather than by the mathematically plotted perspective that was being formulated by Brunelleschi.

For the campanile of the Duomo, Donatello executed a series of figures that includes Il Pensieroso, Prophet with a Scroll, Il Zuccone, Sacrifice of Isaac, and Habuhkuk. In these works he explored the whole range of tragic expression to such depths that their often cruelly realistic portrayals acquire great universal significance. Because they were executed over a long period of time—from about 1416 to 1439—they show the development of Donatello’s interest in chiaroscuro, which was already evident in his St. John the Evangelist (commissioned 1408; Museo dell’-Opera del Duomo) and in St. Mark (commissioned 1411; Orsanmichele). For the later prophets, Donatello seems to have relied both on Roman prototypes and on some Gothic sculpture with its agitated, deeply carved draperies.

In the years between 1420 and 1430, Donatello tried to reconcile his interest in the classical style of Brunelleschi with his own greater realism. He shared a workshop with Michelozzo di Bartolommeo and received many commissions for monumental tombs and for statues in architectural settings. The détente in Donatello’s growing realism is best exemplified in the St. Louis of Toulouse (about 1423-1425; Museo dell’Opera, Santa Croce), originally executed for the Orsanmichele. The carving is softer, subtler, and more subdued than in the prophets to harmonize better with its architectural setting. Quiet, rather dreamy emotional qualities also predominate in the Tomb of Baldassare Coscia (1425-1427; Baptistery, Florence) and in the Tomb of Rinaldo Brancacci ( 1427; Church of Sant’Angelo a Nilo, Naples).

Donatello’s relief sculpture of this period also pays stricter heed to the perspective theories of Brunelleschi. But eventually these theories proved too restrictive, and for II Zuccone ( 1423-1425 ), also called “Pumpkin Head,” and Habakkuk (about 1427-1435; Museo dell’Opera del Duomo), the last of the campanile prophets, he returned to agitated forms and a great play of light and dark. This movement and irrational balance finally developed into an outright opposition to Brunelleschi’s theories in the work executed by Don-atello between 1430 and 1440.

A second trip to Rome, with Michélozzo in 1432-1433, reinforced Donatello’s new direction. In Rome he and Michelozzo worked on the reliefs for the tabernacle of the sacrament in the Sacristy of the Beneficiati in St. Peter’s. He studied early Christian, medieval, Romanesque, and Byzantine frescoes and mosaics, and he may have met Leon Battista Alberti, whose recendy published treatise on painting defined form as motion—a definition that conformed to Donatello’s concept of sculptural form.

When he returned to Florence, Donatello executed the wildly dancing cherub reliefs for the cantoria of the Duomo (1433-1439; Museo dell’Opera del Duomo ) and the outdoor pulpit for the Prato Cathedral (1433-1438). These works illustrate his renewed interest in the expressive properties of light and movement, his divergence from the contemporary attitude toward classical art, and his new interest in high relief. The sculpture he did for Brunelleschi’s Old Sacristy of the Church of San Lorenzo ( 1435-1443 ) also reflects his Roman experience and his break with Brunelleschi’s theories. His four stucco tondi of the evangelists are full of classical decorative motifs, but their arrangement recalls medieval compositions. The same is true of Donatello’s bronze Door of the Apostles and Door of the Martyrs, also at San Lorenzo. The energetic modeling disrupts the quiet classicism of the surrounding architecture in the same way as the restless play of light on the surface of his bronze David (c. 1432; Bargello, Florence) distracts from its classical source.

At the peak of his success, Donatello quit Florence for Padua, where he stayed from 1443 to 1454. His Paduan works are perhaps his most ambitious in scale. In the giant sculptural-architectural group for the high altar of St. Anthony, he presents The Virgin and Child with Saints ( 1450) with the formality and piety of a medieval altarpiece. Dismantled in the 16th century, it originally combined shallow reliefs and freestanding sculpture, in marble and in bronze. In this work Donatello set forth his religious philosophy of the attainment of the sublime through death.

The Gattamelata monument (1447-1453) in Padua, a portrait statue of the Venetian condottiere Erasmo da Narni, reintroduced into Renaissance art the equestrian monument used by the Romans for the glorification of heroes. Its classical model perhaps explains the greater degree of idealism to which Donatello reverted for this work.

When Donatello returned to Florence in 1454, the artistic climate had changed and was alien to his style. In contrast to the graceful and polished styles of Ghiberti, Antonio Rosellino, and Desiderio da Settignano,

Donatello’s work seems ruggedly expressionistic, complex, and deeply introspective. The Magdalene (1455; Baptistery, Florence) is typical. Siena, unchanged since the Middle Ages, provided him with a more sympathetic environment, and from 1457 to 1461 he worked there.

The bronze reliefs for the two pulpits in the Church of San Lorenzo are typical of Donatello’s last Florentine works. They were unfinished when he died in Florence on Dec. 13, 1466. Their realism is exaggerated, almost abstracted, the better to express the absolute tragedy and soul-wrenching emotion of the Passion.

Donatello’s concept of naturalism, which embodied both lyrical and expressionistic qualities, together with his theory that light and motion are inherent attributes of form, had a great influence on painters and architects as well as on sculptors. Such diverse artists as Fra Filippo Lippi, Domenico Veneziano, Botticelh, and Andrea del Verrochio benefited from his example. It was with Michelangelo, however, that his entire achievement came to fruition.