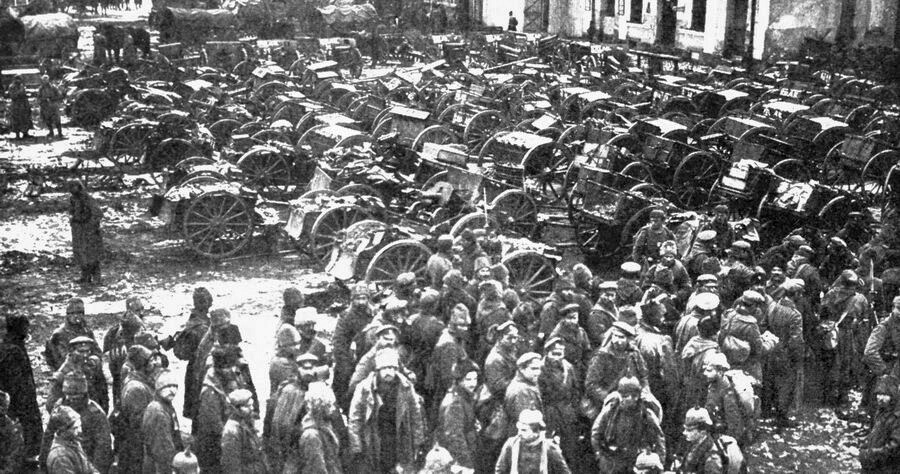 Battle of Tannenberg; in World War I, a decisive victory of the Germans over the Ru sians in East Prussia on Aug. 25-30, 1914. Tannenberg, now Stçbark, Poland, is 95 miles (155 km) northwest of Warsaw. The German plan of Gen. Alfred von Schlieffen, prepared before World War I, was to encircle and annihilate Russia’s armies near the Masurian Lakes in case of a two-front war with Russia and France.

On August 17, two Russian army groups under Generals Rennenkampf and Samsonov invaded East Prussia to ease the German pressure against the French at the western front. After a clash at Gumbinnen (now Gusev, USSR) on August 20, Gen. Max von Prittwitz of Germany, favoring withdrawal to the Vistula River, was dismissed by Marshal von Moltke. Meanwhile Col. Max Hoffmann, in charge of operations, began moving most of the German troops facing Rennenkampf for an attack on the right wing of the Samsonov armies separated from Rennen-kampf’s by the lakes.

The newly appointed German commander, von Hindenburg, and his chief of staff, Luden-dorff, used the same strategy. Their calculation that Rennenkampf would not try to relieve Samsonov, partly because of personal enmity, was confirmed by intercepted uncoded Russian radio messages. The Germans triumphed after their corps commander, General von François, disregarding orders, lured Samsonov’s troops into a trap, encircled, and annihilated them—90,000 Russians were taken prisoner, and Samsonov committed suicide.

Moltke sent two corps from the western front. Too late for Tannenberg, they joined the attacks against Rennenkampf that forced his retreat from East Prussia in disarray. The Russian sacrifices slowed the German advance in the west, helping the French to withstand the German assault at the most critical moment of the war.