The summary of the Georges Perec’s book A Void. Information on the theme, story, characterization and critique of A Void.

La Disparition (A Void) is a lipogram novel by Georges Perec published in 1969. Its originality is that, on nearly 300 pages, it does not once contain the letter e, yet the most used in the French language.

Starting from its own constraint, the novel describes the tragic events that follow the disappearance of Anton Voyl (vowel). The characters constantly come up against the limitations stemming from the missing symbol, and end up dying as soon as they get too close to the truth. 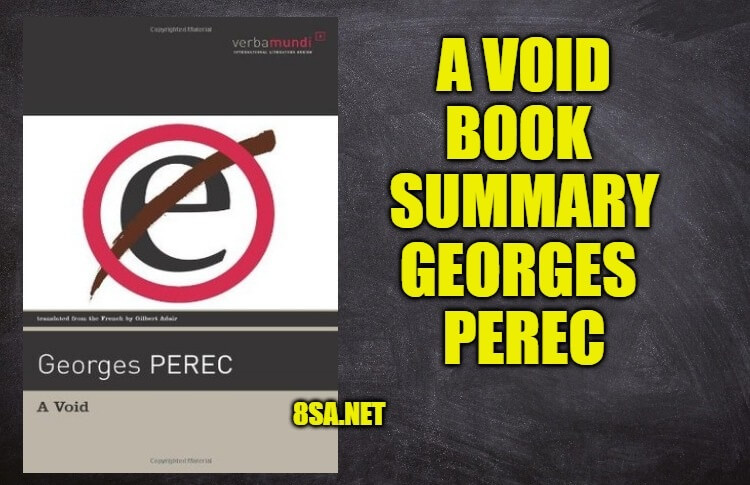 The story begins with a bloody war where widespread killings are described during the deportation of the Jews. It is in this very violent climate that Anton Voyl, the main character, appears.

Anton Voyl suffers from insomnia which has been disturbing him for several months now. He tried everything to heal himself but nothing worked. He even underwent frontal sinus surgery, but no improvement was seen.

Meanwhile, Anton Voyl is permanently subject to hallucinations and visions as disturbing as each other. He would often see Moby Dick, or sometimes a dozing sphynx deep in the Sahara, or a lost son marrying his own mother. His health is getting worse day by day and to relieve his pain, Anton kept a diary in which he noted his anxieties and visions. One day, Anton mysteriously disappears. It was All Saints Day. Reading the notes he left, his friends first thought it was a suicide. Indeed, the notes clearly evoked the fear of death, that it was his turn to die.

Amaury Canson, one of his friends, thinks it is a kidnapping. He then decides to look for his friend, with the help of two policemen, Ottavio Ottaviani and Aloysius Swann. Olga Mavrokordatos, who previously had a romantic relationship with Anton, also decides to join them in finding him. Moreover, she never forgot her beloved who deeply marked her and towards whom she continues to have feelings.

They meet Anton’s lawyer, Hassan Ibn Abbou, who gives them an appointment in order to communicate to them a confidential file entrusted by Anton. But before Amaury and Olga enter the lawyer’s home, he is stabbed without his killer leaving the slightest trace. At the lawyer’s funeral, Amaury meets a stranger who strangely wants to participate in the investigation. This is Arthur Wilburg Savorgnan.

More than motivated to solve the mystery, Anton’s friends, Amaury and Olga, with the stranger, Arthur, decide to meet in a private property, in Agincourt, where they confront a lot of information on the disappearance. Shortly before his disappearance, Anton sent his friends similar letters that may turn out to be the key to the mystery.
This is where disturbing phenomena arise. One by one, each reveals information from the past that can solve the case, but the moment a person is about to reveal the secret that explains everything, that person dies. This is how death first takes Augustus B. Clifford, the owner of the house, then Olga Mavrokordatos, then Amaury Conson. The more they advanced in their search, the more dangerous the situation became and the hope of finding Anton gradually disappeared.

After Amaury’s death, Arthur made a revelation that would change everything. Indeed, it all started with the story of a cursed clan, and it turns out that Arthur Wilburg Savorgnan and Amaury Conson are two brothers belonging to this clan, originally from Ankara. This powerful tribe has a huge heritage, which diminished as the tribe grew. To avoid the many divisions of the inheritance which would lead to the ruin of the tribe, the eldest of the family is the only one who is entitled to all the lots, thus leaving his juniors in misery. This situation creates deep jealousy on the part of the other brothers, and this jealousy goes as far as the assassination, thus allowing the cadets to enjoy the inheritance. A fratricidal war then threatens the extinction of the tribe and since new laws on inheritance are promulgated that one can only have one child, the others should be killed.

A mother once gave birth to triplets while her husband was away. Not resigning herself to the idea of ​​killing her own children, she entrusts the other two to a nurse who will take care of hiding them.

Unfortunately, the clan discovered the scheme twenty years later and to punish the family for this fault, the only remaining child was killed. Consumed by pain, the father, nicknamed the Bearded Man of Ankara, decides to take revenge on his two other sons, whom they consider guilty of the death of the only son in his eyes. He then sets out to hunt them and intends to kill the children of these two sons first, so that they in turn experience the infinite sorrow of a filial love broken too soon. Separated at the age of ten, the two brothers continued their lives on their own: Amaury in a hospice where he lost his memory following an accident, and Arthur in Oxford.

Arthur therefore remains the only one aware of the danger that awaits him: a bloody father ready to do anything to satisfy his thirst for revenge. He starts looking for his brother for six years without being able to find him. Meanwhile, Arthur marries Yolanda but she dies after having fathered six children. To protect his children from their grandfather’s revenge, Arthur took it upon himself to give them to different adoptive parents. His children happen to be Anton Voyl, whom he entrusts to Lord Horatio Voyl in Dublin, Douglas Haig to Augustus B. Clifford, the owner of Azincourt, Hassan Ibn Abbou, the lawyer, to an unknown mother, Olga Mavrokordatos to a Star named Anastasia, and he only keeps two of his children with him, Yorick and Ulrich, who has changed his name and happens to be Ottavio Ottavioni, the policeman.

Amaury, meanwhile, was unaware of his origins and the danger hanging over him due to his memory loss. Thus, he did not escape the revenge of the Bearded Man. Five of his six sons died in very mysterious situations. The first, named Aignan, had disappeared in Oxford, during a Symposium organized by the Martial Cantarl Foundation. The next, Adam, died in a sanatorium, where he was starving. Then the third, Yvan, was swallowed by a big fish in Milan. The fourth, Odilon, succumbed because of a sharp bone that became embedded in his pharynx. The fifth, who was called Urbain, died of hirudination: an earthworm sucked all his blood from him. All that was left was her youngest son, Yvon, who lived far from his father. But the latter ends up dying, much later, stabbed by a stranger. It was only too late that we learned that these were assassinations, orchestrated by the Barbu.

After this disturbing revelation, Arthur and Ottavio also died. Their killer was really just Aloysius Swann, the other policeman. The latter worked for the Barbu d’Ankara. All the people gathered in this private property therefore had family ties of which they were unaware until now. And even that Olga was the lover of her own brother, Anton.

Thus, the Bearded Man of Ankara was behind the whole story and he is responsible for each of the assassinations. More than determined, he managed to achieve his end: to exterminate his two sons and his descendants. As for the disappearance of Anton, we learn that he was not kidnapped but that he was really killed by the Bearded Man.