Whooping Cough; There’s nothing about whooping cough in the first week to make you suspect that disease. It’s just like an ordinary cold with a little running nose and a little dry cough. Toward the end of the week the mother usually thinks that the cold is about over and sends the child back to school. “There was just a little dry cough left.” it is during the second week that the flrst suspicion arises. Now it’s noticed that the child is beginning to have long spells of coughing at night, He coughs 8 or 10 times on one breath. 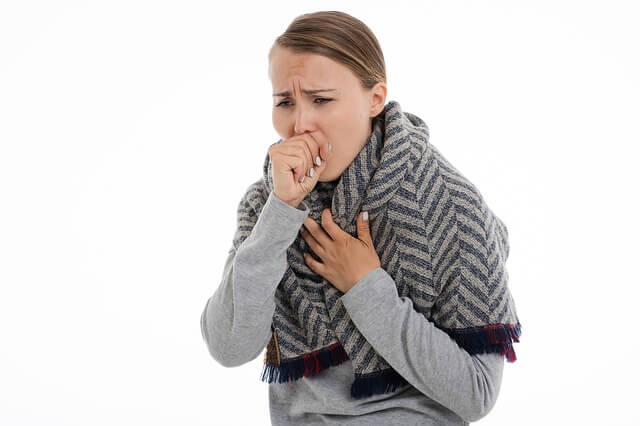 One night, after several of these long spells, he gags and vomits. Or maybe he whoops. The whoop is the crowing noise he makes trying to get his breath back after a spell of coughs. In these days, when whooping-cough shots are so widely used, many cases never are bad enough to reach the whooping stage, and in some there isn’t even vomiting. The diagnosis is then based on the character of the cough in the second week (cough, cough, cough, cough, cough, cough, cough, cough-a string of coughs in rapid succession, without a breath in between) and on the fact that there are other cases in the neighborhood.

When there is a doubtful case and it is important to make the diagnosis, there are two laboratory tests that sometimes help. The flrst is a “cough plate.” The doctor has the child cough into a laboratory plate containing a special gelatin on which whooping-cough germs grow easily. If he finds the germs, he is sure it is whooping cough. But if he doesn’t find the germs, it doesn’t prove that it isn’t whooping cough. This test is most reliable in the flrst week or two of the disease. The other test is a blood count. In some cases the result is deflnite, especiaIly in the third and fourth week; in others it is no help.

Whooping cough can be a serious disease, especially in a baby under 2. It’s a disease to avoid like the plague if you have a baby in the household. The main danger at this age is exhaustion and pneumonia.

Your doctor will prescribe treatment, based on the age of the child and the severity of the case. Cough medicines are always used but often have only a small influence. Most cases do better when in cold air, day and night, but naturally the child must be protected against chilling. Robust children are sometimes allowed to play outdoors throughout the disease as long as they have no fever. Naturally, they should not play with other children. Some children have many fewer coughing spells when they are kept in bed. When vomiting is a problem, frequent small meals stay down better than the regular three full meals. The safest time of all to feed a child is right after he has vomited, since he usually won’t have another bad spell for some time. A tight abdominal binder may give relief to the exhausted abdominal muscles.

Since whooping cough is sometimes a serious disease, especially in babies and young children, it is important to call a doctor promptly when there is a suspicion. There are two main reasons: to make sure of the diagnosis, if possible; and to prescribe the right treatment. Special treatment is called for and is valuable in infants.

Quarantine regulations are different in different communities. Usually a child is kept out of school until 5 weeks after the beginning of the disease and until he has stopped vomiting. The contagiousness of whooping cough does not cease suddenly after a certain number of weeks. It gradually diminishes, sooner in a light case. For home purposes, you can count a child as being no longer much danger to others when his cough has been much improved for 2 weeks. Whooping cough takes from 5 to 14 days to develop after exposure. If an infant who has not yet had his whooping-cough shots is exposed to the disease, a serum can be given to prevent the disease or make it lighter.