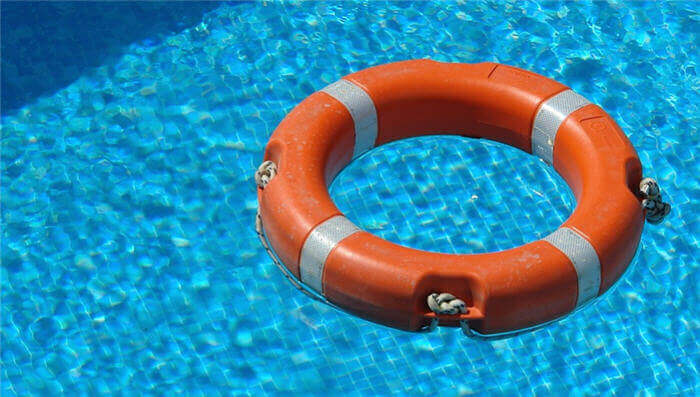 Some objects float in water while others sink. For example, if a stone and a piece of wood are dropped into water, the stone sinks and the wood floats. What you have already learned about water pressure and density will help you understand why this happens. Below the surface, the water at any point exerts an equal force in every direction. The deeper the water gets, the greater its pressure becomes. The density of water is 62.4 pounds per cubic foot. So the force at the bottom of a cubic foot of water is 62.4 pounds. This force is acting in all directions—downward, upward, and even sideways. Yet whatever its direction may be, the force is caused by gravity, pulling downward on the water.

Suppose that you have a block of wood whose volume is 1 cubic foot. If this block is held under water, it pushes aside, or displaces, 1 cubic foot of water. The density of pine wood is about 31 pounds per cubic foot. So gravity pulls down on the block of wood with a force of about 31 pounds. At the same time, gravity makes the displaced water push up on the wood with a force of 62.4 pounds. As a result, the upward force on the wood is greater than the downward force. So the block is lifted until about half of it stands above the surface of the water. It now displaces only about 1/2 cubic foot of water, which weighs about 31 pounds. The weight of the wood and the weight of the displaced water just balance each other. When this happens, the wood then floats.

Now imagine that you have a block of stone whose volume is 1 cubic foot. If this block is lowered into the water, it also displaces 1 cubic foot of water. The density of the stone is 130 pounds per cubic foot. Gravity pulls down on the stone with a force of 130 pounds. At the same time gravity makes the displaced water push up on the stone with a force of 62.4 pounds. Because of this upward force, the stone is easier to lift. It seems to be 62.4 pounds lighter. As long as it is under water, it seems to weigh only 67.6 pounds (130 pounds — 62.4 pounds = 67.6 pounds). But gravity still pulls down harder on the stone than the water pushes up on it. So if you let go of the stone, it sinks.

You can now understand why some objects float in water and others sink. After doing many experiments, scientists have come to this conclusion: Any material, such as wood, whose density is less than that of water will float in water. Any material, such as stone, whose density is more than that of water will sink in water. But whether an object floats or sinks, the upward force on it is just equal to the weight of water that would go into the space which the object takes up. Scientists have a special name for this important fact. They call it Archimedes Principle, and it may be stated in this way: Any object placed in a fluid is buoyed up (pushed upward) by a force equal to the toeight of the fluid that it displaces. A fluid is any material that will flow. Water and air are both fluids. So Archimedes’ Principle applies not only to water and air but to all other liquids and gases.

Archimedes was a famous Greek scientist who lived about 2200 years ago. According to the story, this is how he discovered the principle that has ever since been called by his name. He was asked by his king to find out whether a new crown was made of pure gold, but he was not to damage the crown in any way. Archimedes knew that he could solve the problem by finding the density of the crown. Gold has a greater density than any other metal that was known in those days. If silver had been mixed with the gold, the density of the crown would have been less than that of gold.

To find the density of the crown, Archimedes needed only to know its weight and its volume. Finding the weight of the crown was easy. But the crown had such an irregular shape that he could think of no way to measure its volume. While taking a bath one day, he noticed that the water rose in the bathtub when he got into it. At the same time, his body seemed to feel lighter. He quickly realized that he had found a way to solve his problem. He was so excited that he ran ali the way home, shouting as he went “Eurekal” which in Greek means “I have found iti”

Archimedes discovered that the water pushed up on his body with a force that was just equal to the weight of the water which his body displaced. In other words, if his body displaced 2 cubic feet of water, then it was being pushed up with a force of 124.8 pounds. So his body seemed to weigh 124.8 pounds less in water. When Archimedes understood the reason for this, he knew at once how to find the density of the crown. All he had to do was weigh the crown, then lower it into water, and weigh it again. The loss of weight would tell him the volume of the crown.

Now you can understand why a wooden raft floats in water. But why does a steel ship float in water? Steel is certainly more dense than water. If a piece of steel is dropped into water, it sinks.

Because a steel ship is hollow, a large part of its volume contains air. The density of steel is about 493 pounds per cubic foot, but the density of air is about .08 pound per cubic foot. So the average density of a hollow steel ship is much less than that of water. When a steel ship is launched, it sinks until it displaces just enough water to equal its own weight. Then it stops sinking, because the upward force of the water on the bottom balances the downward pull of gravity on the ship. Of course, when a ship is loaded, it sinks deeper until enough more water is displaced to equal the extra weight of the cargo. A floating ship displaces just as many tons of water as it weighs. So what is called the displacement of a ship is really the same as its weight.

A diver in his helmet and waterproof suit must be denser than water to stay down below the surface. However, a person s body is just a little denser than water. With his lungs full of air, almost anyone can float. When a diver starts down into the water, his suit is filled with air. Though his helmet is heavy, he wiil barely sink or may even float. To carry him down and help him walk flrmly on the bottom, he must be weighted down. His shoes have heavy lead soles, and lead weights are hung around his waist. This extra weight makes his average density greater than the density of water.

An instrument called a hydrometer is used to measure the density of various liquids, such as antifreeze solutions and the solutions in storage batteries. A hydrometer is a hollow glass float weighted at the bottom so that it will stand upright in a liquid. When it is put into a liquid, it sinks until it displaces its own weight of the liquid. The density of the liquid is shown by numbers on a scale.

When a storage battery is charged by an electric current, the sulfuric-acid solution inside becomes more dense. Then as the battery is discharged, the solution becomes less dense. A hydrometer shows these changes in density. When the sulfuric-acid solution is dense, the hydrometer sinks to a certain depth. As the solution becomes less dense, the hydrometer must sink deeper to displace enough liquid to equal its own weight. By reading the numbers on the scale, you can teli what the condition of the battery is.