Filippo Brunelleschi; (1377-1446), Florentine architect, who was one of the founding fathers of the Italian Renaissance. His designs for churches, chapels, palaces, and fortifications pioneered trends that later spread throughout Renaissance Europe. Brunelleschi also made decisive contributions to the nascent science of perspective. 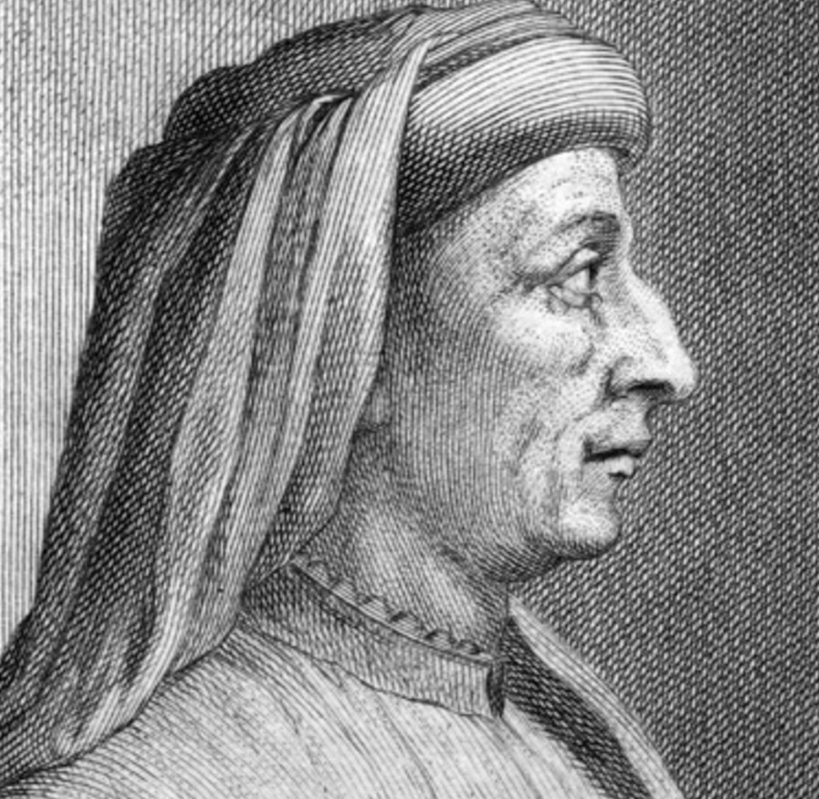 Brunelleschi was born in Florence and was initially trained as a craftsman in gold and silver. Some of his early sculptures in precious metals were made for the Cathedral of Pistoia. In the famous competition held in 1401 for designing the bronze doors of the Baptistery of Florence, Brunelleschi and Lorenzo Ghiberti were jointly offered the commission. The doors were ultimately executed by Ghiberti, but Brunelleschi’s trial panel may still be seen in the Bargello Museum in Florence.

Brunelleschi’s interest then turned primarily to architecture. In 1418 he intervened in the debate on how to close the opening, 132 feet (40 meters) in diameter, over the crossing of the Gothic Cathedral of Florence. He devised an ingenious method of erecting a ribbed brick dome without the use of fixed centering. This dome, consisting of two separate 8-sided cloister vaults, one inside the other, has a shape determined entirely by structural needs—an early case of architectural functionalism.

Dating from about the same period in Brunelleschi’s career are his remodelings of the Church of San Lorenzo to serve as the Medici family chapel (1418-1428) and of the foundling hospital called the Ospedale degli Innocenti ( 1421-1455). San Lorenzo shows the emergence of Brunelleschi’s geometrical approach to planning; single unit of design—the modular square—has been imposed on all major parts of the plan and elevation, with the result that the interior is elegant and austere, creating an effect of tranquil repose. The main façade of the Ospedale has an elegant arcaded loggia that is a model example of what was to become a characteristic Renaissance architectural theme.

In Brunelleschi’s later years he shifted from a delicate, linear style that treats a building as an aggregate of juxtaposed planes to a more massive, almost sculptural manner, in which the building seems to be generated from an active interplay of solids and voids. The later style is seen in the unfinished Church of Santa Maria degli Angeli (begun 1434), in which the interior is formed by powerful niches opening from a central octagon, and in the Basilica of Santo Spirito (begun 1436). The austere simplicity of these late works are a culmination rather than a reversal of Brunelleschi’s earlier achievements.

Later Renaissance architects sometimes criticized Brunelleschi’s choice of ornamental motifs, and several of his buildings suffered in the baroque era from misguided efforts to improve them. But Brunelleschi’s fame has never been eclipsed. Indeed, his influence increased during the 19th and 20th centuries when he came to be regarded as one of the great exponents of rational architecture, as opposed to the more emotional Gothic style that preceded him and the baroque style that followed.