The nervous system is a complex and anatomical network of structures. They are composed of cells and organs. It is considered to be the most complete and complex system of the human body.

The nervous system is formed by the brain, the spinal cord and millions of cells that compose it. These cells are called neurons and, unlike the rest of the cells in the body, they can not regenerate

For your study it is divided into:

Central Nervous System.
Peripheral nervous system. This in turn is subdivided into: 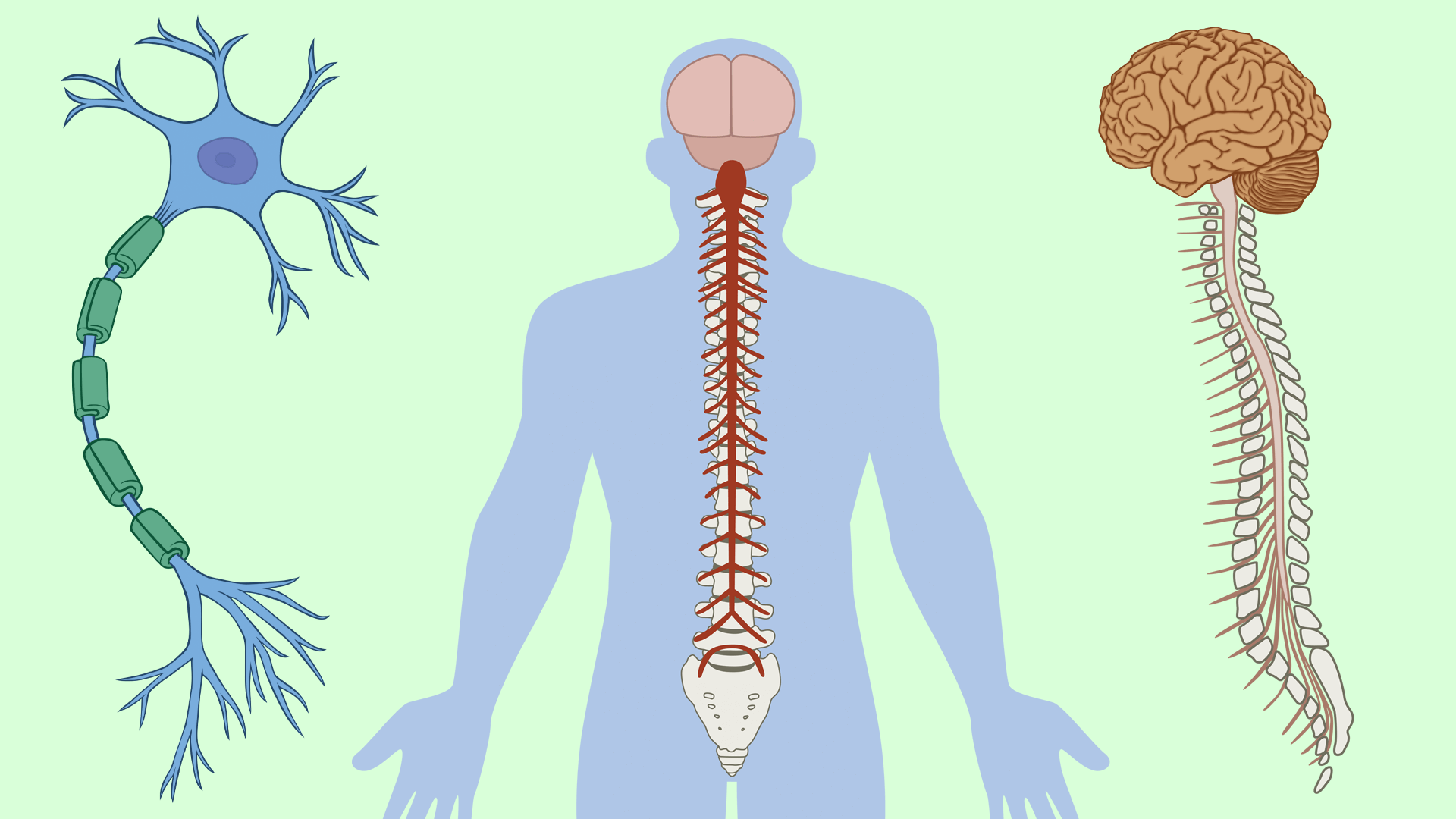 In 1780 Luigi Galvani (born in Italy in 1737) began to study the electric-type nature of nerve impulse. In a lecture in which he participated, he said that some time ago he had discovered that a small electric shock could be sent to the spinal cord of a dead animal and that it would have involuntary reactions (for example the movement of a leg) as if it were alive.

This was discovered by the dissection of a dead frog, because his scalpel accidentally touched a bronze hook from which the frog’s leg hung and the frog made an involuntary movement, due to the electric discharge.

As mentioned above the nervous system can be divided for its study into 4 parts:

Central nervous system (CNS). It is located in the head. It is composed of the spinal cord, the brain and neurons. These 3 form a complex network through which the electrical impulses of the whole body circulate.
Both the brain and the spinal cord are covered by 3 types of membranes called: dura mater, arachnoid and pia mater.

Peripheral nervous system (PNS). Composed by sensory receptors and nerves. This system is responsible for traveling throughout the body through the nerves. Within this SNP there are axons or dendrites that are covered by fascicles.

3. Components of the CNS

The central nervous system consists of:

Encephalon It is found inside the skull and includes the brain, cerebellum and spinal bulb.
Spinal cord. It is located in the inner part of the vertebral canal. It is divided into 4 regions. It is responsible for sending nerve impulses to the brain for coordination.
Nerves. It is the basic unit of the nervous system. They are responsible for connecting the brain with the spinal cord and this with other parts of the body.
Neurons They are the cells of the nervous system. As a particularity these neurons (and unlike other cells of the body) do not divide.
Ganglia It is found in the SNP and are small accumulations and contain neurons associated with cranial or spinal nerves.

For its study and analysis, the peripheral nervous system is divided functionally in the different areas.

Somatic nervous system. He is in charge of carrying out voluntary movements. It consists of 31 pairs of nerves called spinal and 12 pairs of cranial nerves.

Division of the autonomic nervous system:

Sympathetic nervous system. It is the system that is responsible for preparing the agency to take action. This system takes care of raising the pressure, increasing the heart rate, dilate the size of the pupils, etc.

Parasympathetic nervous system. It is responsible for taking the body to relaxation after a stressful situation. 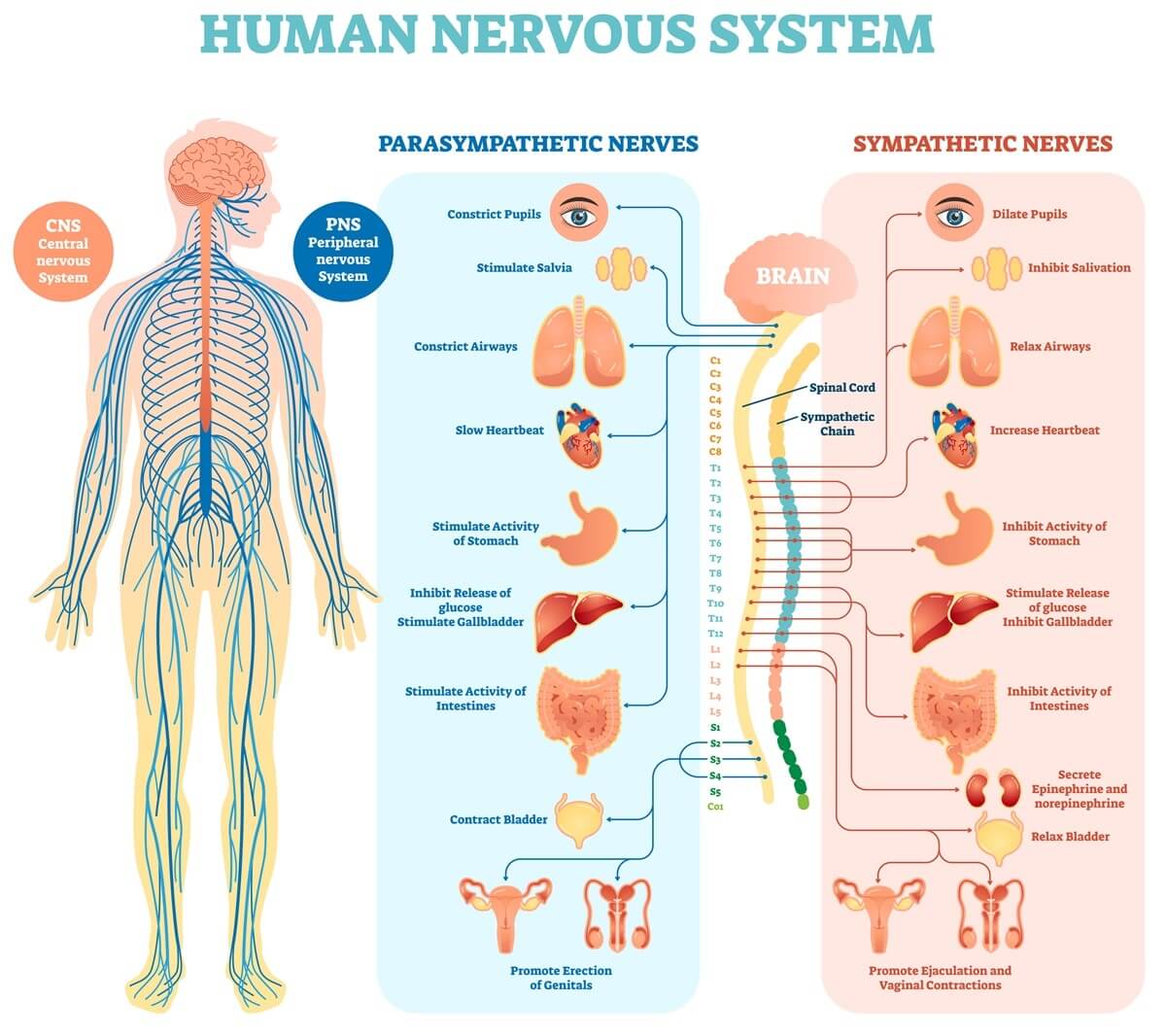 There are 2 types of nerves:

As explained above are the cells of the nervous system. They are cells that make possible all the functions of the organism. The encephalon of man can have around 100 million neurons.

It consists of 3 parts:

Neuronal body It has the nucleus and the cytoplasm.
Dentritas Short and branched extensions.
Axons It is a unique and variable prolongation. In the final part the axon will connect with other neurons and thus transmit the information from one to another.

9. The importance of amino acids

In order to protect the nervous system and prevent or stop the possible diseases that occur in it, it is important to give primary importance and attention to food. This must be rich in vitamins A, C, E, K, B5, B6, B12, choline and minerals.