How does fern plant reproduce? What is the reproduction and life cycle of fern? Information on fern life cycle.

Ferns reproduce both by sexual and asexual means. As in flowering plants the sexual life cycle includes two generations, or phases. One generation is the obvious familiar fern sporophyte, which bears sporangia in which spores are formed. The spores develop into the inconspicuous gametophyte generation, which has male and female sex organs (antheridia and archegonia) in which sperms and eggs form.

Fertilization occurs when the gametophytes are wet. Sperms released from the antheridium move through the film of water and into the archegonium, which contains an egg. One of the sperms unites with the egg. The fertilized egg, or zygote, contained in the archegonium develops into an embryo that briefly remains attached to the gametophyte by a protruding foot. Early in the embryo’s development a root forms to anchor the embryo as the gametophyte disintegrates. In addition, the embryo forms a shoot that becomes the rhizome and also the tiny first leaf. As the embryo grows, the gametophyte, foot, and root die. Subsequent roots are all adventitious outgrowths of the rhizome associated with the leaves. 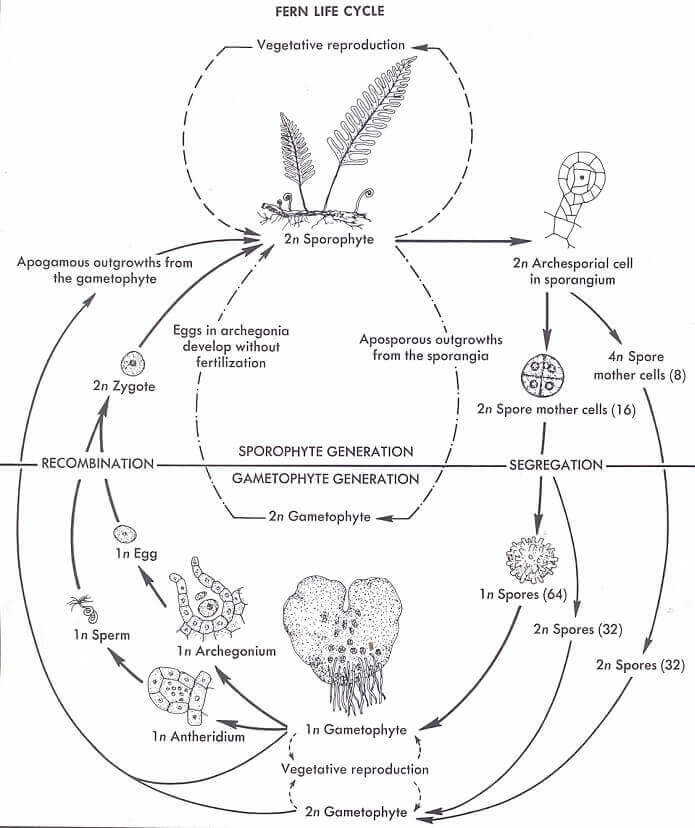 Alternation of the sporophyte and gametophyte generations permits the segregation and recombination of genetic material and results in variation in the characteristics of the individuals of the species upon which the forces of natural selection operate. Segregation occurs in spore formation during meiosis, which reduces the number of chromosomes to half (to n) what it was in the sporophyte (2n). Recombination occurs when a sperm and egg unite to form a zygote, doubling (to 2n) the number of chromosomes in either the sperm (n) or the egg (n).

Some 20% to 35% of the ferns reproduce asexually at least part of the time by the processes of apogamy or apospory, which circumvent fertilization and also sometimes meiosis. Because no sex organs, gametes, or zygotes are formed, no genetic material is recombined, and no genetic variation occurs in the offspring. These processes, therefore, are an evolutionary blind alley, but they do enable a species to reproduce in dry, dark, cold, or otherwise unfavorable habitats. In apogamy, outgrowths from the gametophytes, which have the same chromosome number as the sporo-phytes, grow directly into sporophyte plants. In apospory, outgrowths from the sporangia grow directly into gametophytes that have the same chromosome number as the sporophytes, which in turn produce archegonia with eggs that grow into sporophytes without fertilization.

Vegetative reproduction is very common in ferns. It is known in the gametophytes of the Adiantaceae and Hymenophyllaceae and in the sporophytes of almost all ferns. Gametophytes either produce specialized bodies (gemmae) that become detached and grow into new gametophytes, or they develop new gametophytes from the margins of the old ones. Sporophytes reproduce themselves asexually by repeatedly branching rhizomes that separate into independent plants as the older portions die, by runners, and by root buds. They reproduce asexually also by buds, bulbils, or plantlets that form on the leaves and by overarching and rooting leaf tips.