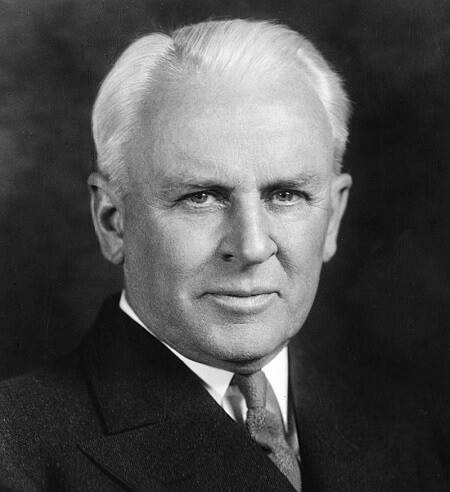 Robert Andrews Millikan; American physicist: b. Morrison, 111., March 22, 1868; d. San Marino, Calif., Dec. 19, 1953. He studied at Oberlin College (B.A., 1891), Columbia University (Ph.D., 1895), and later also in Germany, and in 1896 joined the faculty of the University of Chicago, where he had a distinguished career as a teacher for the next 25 years. Milli-kan simplified methods of teaching elementary physics, and textbooks that he wrote about 1903 were still being used in revised editions at the time of his death. In 1921 he was named chairman of the executive council of the California Institute of Technology and director of its Norman Bridge Laboratory, and served in these capacities until his retirement in 1945.

Millikan made significant contributions to the 20th century revolution in physics. He did original research on X-rays and the free expansion of gases, and in 1923 received the Nobel Prize for isolating the electron and measuring its electric charge and for his work on the photoelectric effect (the electricity which light generates in certain metals). Important as these and other contributions were, he was best known for his research on cosmic rays, which he named ; the results of the many years of investigation that he devoted to the subject are described in Electrons (+ and — ), Protons, Photons, Neutrons, Mesotrons, and Cosmic Rays (1947; enl. ed. of The Electron, 1917). In his opinion, cosmic rays originate in outer space, may serve as a rebuilding force in the universe, and are evidence that “the Creator is still on the job.”

The son of a Congregational minister, Millikan was intensely interested in the reconciliation of science and religion, which he regarded as complementary. This philosophy is seen in some of his works, such as Science and Life (1924), Evolution in Science and Religion (1927), and Science and the New Civilization (1930). Besides many technical writings, he published an Autobiography (1950).

During World War I, Millikan served as scientific adviser to the United States government, and he received the Presidential Medal of Merit for his work on rockcts and jet propulsion during World War II.