Horace Greeley; (1811-1872), American journalist and political leader, who founded the famous and influential New York Tribune. Besides his editorial labors, Greeley traveled widely in public lecture tours and published a dozen books and pamphlets. Of these, The American Conflict (2 vols., 1864, 1867) and Recollections of a Busy Life (1868) were the most important. A crusader and a conservative, he was “by turns sagacious and childish,” as Samuel Bowles once remarked. He was often wrong in his judgments, and his life was full of contradiction and tragedy. But he founded and developed a great newspaper, and he fought stubbornly and often successfully for the moral improvement of the nation. These accomplishments, together with his earthy humor and his rise from poverty to material success, have secured for him a lasting place in American history.

Greeley was born in Amherst, N. H., on Feb. 3, 1811. His parents, who were farmers, came of English and Scotch-Irish stock, his ancestors being chiefly small-town and country folk.

Poverty and hardship marked Greeley’s early life. The family farm was seized by creditors in 1820, and the Greeleys moved to Westhaven, Vt. Life was difficult there, and in 1826 they moved again to a small clearing in Erie county, Pa. Horace, however, did not go with them. He had obtained a post in the office of the Northern Spectator at East Poultney, Vt. There he remained until 1830, when he rejoined his family and found work temporarily in a newspaper office in Erie, Pa. This failing, he went to New York, arriving in the metropolis on Aug. 17, 1831, a pale, gangling, tow-headed, 20-year-old youth in scarecrow clothing, a pious Universalist, a teetotaler, an ardent protectionist, politically conservative, fully conscious of the fact that he was brighter than the average run, and possessed by a consuming ambition to get ahead in the world. 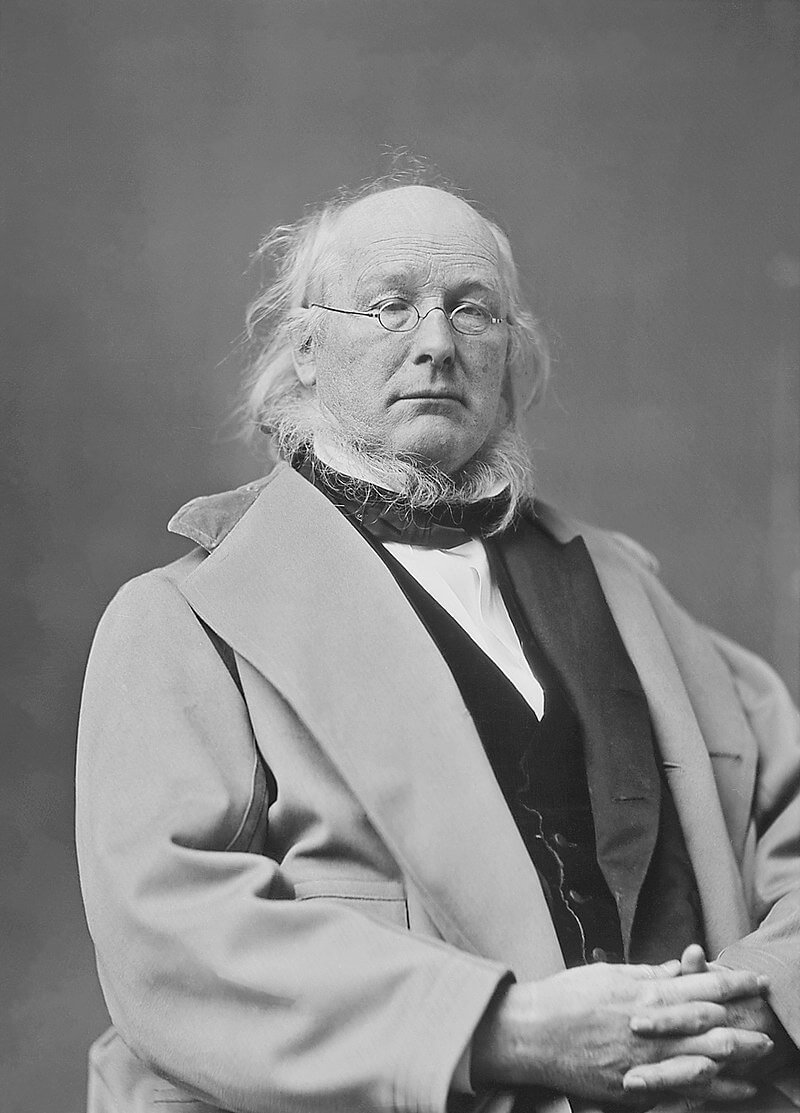 During the next 10 years, Greeley struggled hard to make a living as a printer and publisher. His New Yorker, begun on March 22, 1834, and devoted to literature and politics, was always on the verge of bankruptcy. His marriage on July 5, 1836, to Mary Youngs Cheney, a pretty little dyspeptic schoolteacher with an active though none-too-stable mind, was celebrated in a glow of romantic excitement; but a series of miscarriages, and Greeley’s absorption in his work, soon turned the bride into a querulous complainer and ruined any chance of success the marriage had.

In the midst of all these trials, however, Greeley was perfecting a literary style, a simple, forceful prose, crystal clear in its shades of meaning. His lucid political comments, for all their professed impartiality, were clearly Whig in tendency and attracted the attention of Thur-low Weed, boss of the New York state Whig party. In 1838, Weed made Greeley the editor of the Jeffersonian, a weekly devoted to the gubernatorial campaign of William Henry Seward. Thus the partnership of Weed, Seward, and Greeley came into being. In 1840, Greeley published another weekly, the Log Cabin. On April 10, 1841, when the New York Tribune hit the streets, he realized his long-cherished dream of publishing a Whig penny daily.

With the Tribune, Greeley’s genius as an editor came to full flower. It was a family paper, dedicated in the broadest sense to the elevation of the masses. Greeley edited it with an eye to the new, the startling, the significant, and also to the fortunes of the Whig party. He gathered about him a galaxy of editors and distinguished feature writers; and always there were the trenchant editorials signed “H. G.,” editorials so compelling in their logic and moral fervor, and so imbued with a quaint and pithy humor, that they made Greeley and the Tribune almost identical in the minds of many readers. The paper mirrored its editor’s faith in progress and the romantic idealism that made him the champion of all kinds of educational and social reforms, from vocational training to Fourierism. It also mirrored his fundamental conservatism, his fear of the impulses of the uneducated masses, and his admiration for the captains of industry.

As the 1840’s wore on, Greeley took an increasingly active interest in politics. With Weed and Seward, he championed a liberal Whiggism that emphasized protection, internal improvements, justice to the foreign-born, and opposition to the Mexican War and to slavery expansion. He also became politically ambitious, although he was politically inept. His ambition for office met only a cool response from Weed, who also disregarded Greeley’s advice on political strategy. The offended Greeley “dissolved” the partnership of Sew.ard, Weed, and Greeley in a letter to Seward, on Nov. 11, 1854, a letter that did not become public until after the convention of 1860.

Despite his troubles with Weed and Seward, Greeley played a significant role in the political events of the 1850’s. He denounced the Kansas-Nebraska bill of 1854 and the Dred Scott decision of 1857; was one of the leaders in the formation of the Republican Party; and devoted the immensely influential Tribune to an excoriation of slavery and slaveholders that made his name anathema in the South. His activities at the Republican National Convention of 1860, although not of decisive importance, contributed materially to the defeat of Seward’s candidacy for the nomination and thus to the convention’s choice of Abraham Lincoln. The Tribune’s editor also helped shape the Republican platform, especially the homestead plank. He could reasonably hope for great influence over Lincoln’s administration.

This influence did not materialize, for Greeley’s course between 1860 and 1864 was to be of such a mercurial nature as to make it impossible for Lincoln to trust him. Greeley had no confidence in Lincoln, hated and feared war, and was unnerved by military crises. His advocacy of letting the South “go in peace” was undoubtedly predicated on the assumption that the South would, at the worst, secede only temporarily, but it was hedged with so many equivocal and contradictory assertions that it confused everyone who read his editorials on the subject. His conduct of the Tribune during the war, his sporadic cooperation with the Radicals, and his efforts to hurry the coming of peace in 1863 and 1864 were embarrassing to Lincoln and indicative of Greeley’s mental turmoil.

Though he had worked with the Radicals most of the time during the war, Greeley broke with them at its close because of their attitude toward the South. “Universal Amnesty and Impartial Suffrage” summed up his Southern policy, and in 1867 he signed Jefferson Davis’ bail bond in courageous contempt of popular opinion. His plea for amnesty did much to lessen his popularity and influence, and it ruined the sale of his extraordinary, though biased, The American Conflict.

Greeley did not oppose Radical reconstruction, once it was enacted into law, largely because it provided for Negro suffrage. Indeed, he became a bitter critic of President Andrew Johnson and used the Tribune to support the impeachment of the president. Greeley wanted Salmon P. Chase was nominated in 1868, and the selection by the Republicans of Ulysses S. Grant was distasteful to the Tribune’s editor. His opposition to the warrior deepened during the next four years, as did his passion for public office. This led him to accept the ill-advised presidential nomination of the Liberal Republicans and Democrats in 1872. Greeley based his campaign on the need for national unity, but Grant defeated him decisively in a vituperative contest.

Overwhelmed by the attacks upon his character and motives, exhausted by his vigil at the bedside of his wife, who died on Oct. 30, 1872, Greeley returned to the Tribune, only to find that his word there was no longer law. He sank, under this series of shocks, into the blackest despondency. The will to live was gone. He died in Pleasantville, N. Y., on Nov. 29, 1872.