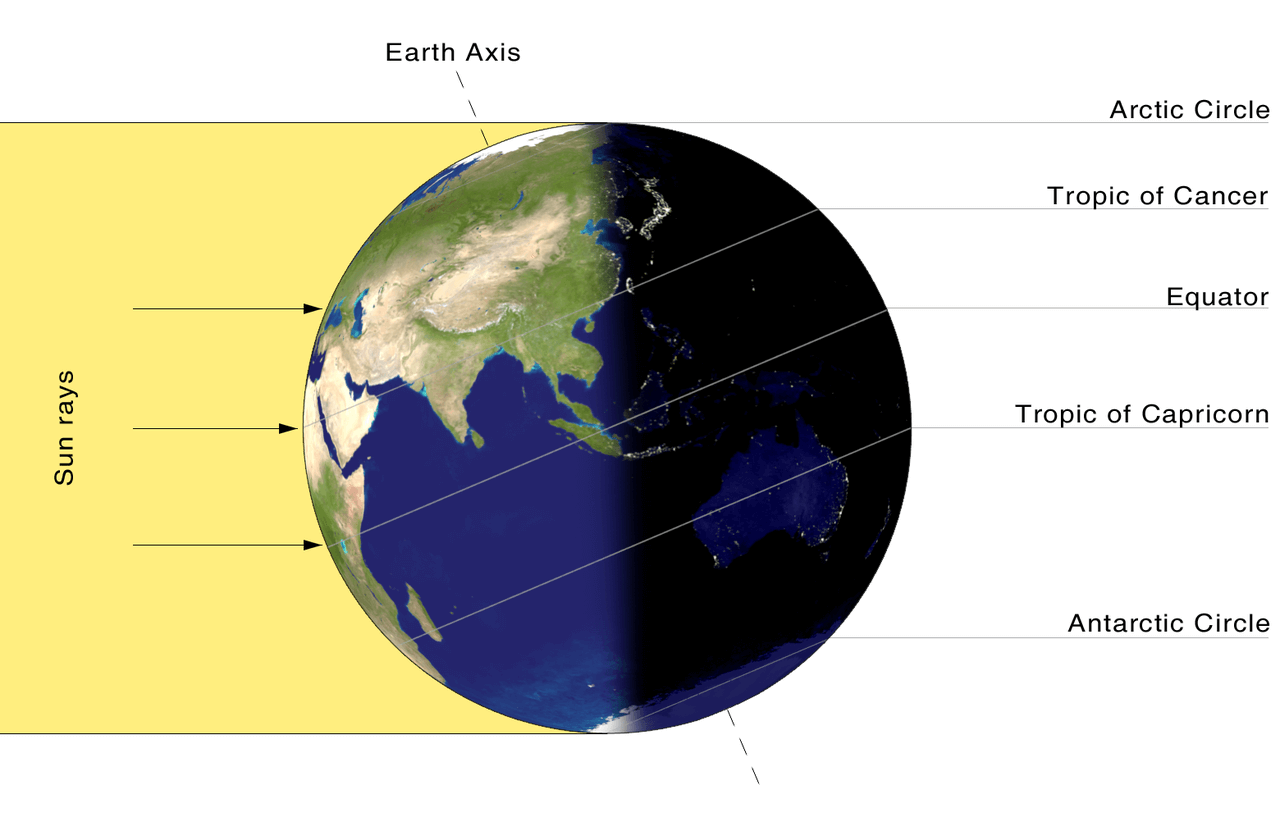 Illumination of Earth by Sun on 21 June. The orientation of the terminator shown with respect to the Earth’s orbital plane. (Source : wikipedia.org)

The solstices are the times of the year when the Sun reaches its highest or lowest apparent height in the sky, and the duration of the day or night is the maximum of the year, respectively. Astronomically, the solstices are the moments when the Sun reaches the maximum north (+ 23º 27 ‘) or south (-23º 27’) declination with respect to the terrestrial equator.

Throughout the year the position of the Sun seen from the Earth moves towards the North and toward the South. The existence of the solstices is caused by the inclination of the Earth’s axis on the plane of its orbit.

On solstice days, the duration of the day and the altitude of the Sun at noon are maximum (at the summer solstice) and minimum (at the winter solstice) compared to any other day of the year. In most ancient cultures, festivals commemorating the solstices were held.

In temperate zones, the dates of the solstices are identical to those of the astronomical passage from spring to summer and from autumn to winter. The dates of the winter solstice and the summer solstice are reversed in both hemispheres. Solstice is an astronomical term related to the position of the Sun in the celestial equator.

Daytime movement of the Sun

On solstice days, the duration of the day and the altitude of the Sun at noon are maximum or minimum with respect to any other day of the year.

At the North Pole the Sun circulates through the sky at a constant altitude of 23 °.

In the arctic circle the center of the Sun only touches the northern horizon, without setting. The Sun culminates to the South, where it reaches its maximum altitude: 47 °. It is the only day that the Sun stays on the horizon for 24 hours.

At the equator the Sun rises at 23 ° North, from the East. It culminates to the North, where it reaches its maximum altitude: 65 °. It sets at 23 ° North, to the West. Stay 12 hours on the horizon.

In the Antarctic polar circle the center of the Sun only touches the northern horizon, without leaving. It is the only day that the Sun stays below the horizon for 24 hours.

At the South Pole the Sun never rises. It always stays 23 ° below the horizon.

The solstitial point is located at the beginning of the Taurus constellation, with which the astronomical name of the tropic is Taurus.