Who is Hannah More? Information on English woman of letters and moralist Hannah More biography, life story, works and writings.

Hannah More was the fourth of five daughters of a charity schoolmaster, from whom she received her first lessons. In 1757, her elder sisters opened a school for girls in Bristol, in which she became first a student, then a teacher. The school was at once a success and served as a social center to attract such local luminaries as Edmund Burke. At the’ age of 22, she became engaged to William Turner, a wealthy squire 20 years her senior, but broke the contract after he had three times in six years postponed the ceremony. Protesting his continued affection, Turner secretly settled an annuity on her which gave her financial independence. 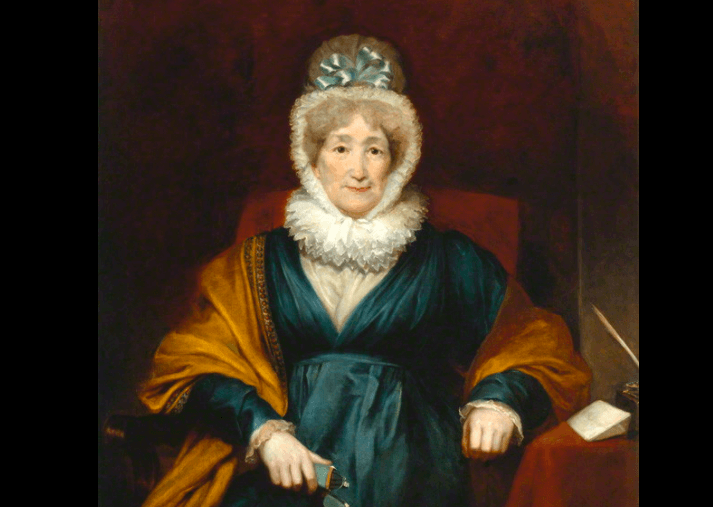 Her first publication, a play suitable for girls’ theatricals, appeared in 1773, shortly before she went to London. There she met David Garrick, whom she won with praise of his acting in King Lear. His support insured the success of her plays The Inflexible Captive (1774) and Percy (1777). Through him she gained entry into the Samuel Johnson circle and the bluestockings, a group of literary ladies which included Elizabeth Montagu, Hester Thrale, and Elizabeth Vesey. In this atmosphere she wrote such verses as Sir El-dred of the Bower (1776), Ode to Dragon (1777), and Bas Bleu (1786).

Between Garrick’s death in 1779 and the sale of the school 10 years later, Hannah More’s interests turned gradually to religion. From Cowslip Green, a cottage in Wrington, the sisters, united again under Hannah’s domination, carried out expeditions in philanthropy. At the urging of William Wilberforce, a leader in the Evangelical movement, she established a Sunday school at nearby Cheddar. There, as in the other schools she soon opened in the Mendip Hills, the poor were taught literacy, religion, and hygiene. Wilberforce, Zachary Macaulay (father of Thomas), and others of the “Clapham Sect” undertook to supply the newly literate with fit reading matter. The “Cheap Repository Tracts,” a series of whose 114 numbers Hannah More wrote 50, presented piety in the shape of the popular literature of the day, so successfully that millions were sold at a penny each.

The “Blagdon controversy,” which raged from 1800 to 1803 about her refusal to dismiss a teacher accused of “Methodism,” cost her prestige and may have caused the long illness which followed. Thereafter, at Barley Wood, she devoted herself for the next 25 years to forwarding a variety of philanthropic causes. Works on the education of women, a pious novel (Coelebs in Search of a Wife, 1809), and didactic religious works flowed from her pen. The Bible Society, the foreign missions, and institutions to abolish slavery all received her unsparing help.

Of her vast writings, nothing remains readable today except her vivid and informative letters. She began her career as a reformer by overcoming conservative opposition ; she ended it decrying the grandiose plans of her successors, whom she enjoined “to steer the middle way between the scylla of brutal ignorance and the charybdis of a literary education,” for the poor.