What is goniometer? Definition and what is a goniometer for? Working principle and types of goniometer.

Goniometer; an instrument for measuring angles, especially the angles that are formed by the faces of crystals. Ganiometers are used by mineralogists and crystallographers to study crystal morphology-that is, to determine symmetry, crystallographic constants, and the kinds of faces occurring on crystals. 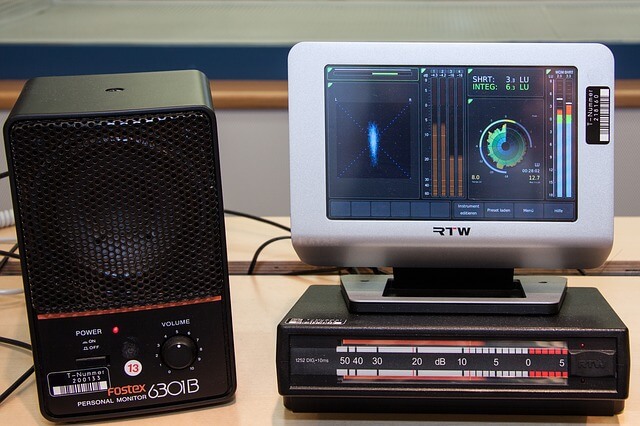 The simplest form of the instrument is the contact goniometer invented by a French mineralogist, Arnould Carangeot, in the 1780’s. It consists of a card on which is printed a semi-circular are graduated (marked off) in degrees of a circle. At the center of the are is fastened an arm that may be rotated to any desired position. To measure the angle between two adjacent crystal faces, the bottom of the card and the edge of the arm are brought into contact with the faces. The contact goniometer is useful for measuring large crystals and crystals whose faces are not smooth and bright.

The reflecting goniometer was invented by an English physicist, William Wollaston, in 1809. It has since undergone extensive modifications and improvements. The instrument measures the angle between any two faces on a crystal by observing (through a small telescope) the light reflected from each face in turn. The crystal is attached to a graduated circle and rotated until it reflects a source of light into the telescope. The crystal is then rotated until the second face reflects light. The angle measured is the one between the perpendiculars (normals) to the faces.

There are two principal kinds of reflecting goniometers. The one-circle goniometer consists of an accurately graduated horizontal circle, a collimator to form an hourglass-shaped image of a light source, or signal; and a telescope to observe the reflected signal, which is centered on crosshairs in the telescope. The crystal is mounted on a pin in the center of the circle and may be raised or lowered and shifted to bring it into proper alignment for measurement. 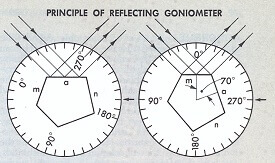 The two-circle goniometer has two independent graduated circles, one horizontal and one vertical. The crystal to be measured is centered on the axis of the vertical circle and positioned over the axis of the horizontal circle, The position of each face on the crystal may then be determined by rotating the vertical circle and swinging the entire vertical-circle assembly about the horizontal circle. In effect, the latitude and longitude of the normal to each face is determined.