Placenta Accreta describes a condition in which the placenta attaches to the mother’s womb abnormally. Abnormal adhesion of the placenta causes a delay in its removal, necessitating manual or even surgical removal. It was first described by physician Frederick Irving in 1937. The first cause of placenta accreta is previous uterine surgery. The incidence of this abnormality is estimated to have increased over the past three decades, currently at 3 per 1000 pregnancies. It is probably related to the increase in surgeries and cesarean sections at that time.

Three types of abnormal placental implantation have been described due to invasion of the chorionic villi into the myometrium: accreta, increta, and percreta. Treatment consists, in most cases, of total hysterectomy soon after delivery. 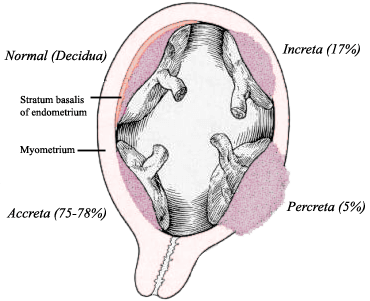 Initially, clinical signs and symptoms are few. In fact, symptoms are usually absent during pregnancy. The most common clinical findings are restriction in expulsion of the placenta and postpartum bleeding in the mother. Pain is not a common symptom, but difficulty removing the abnormally attached placenta can cause it.

Limitation to expel the placenta

It consists of the delay of placental exit -delivery- which should occur within 30 minutes after birth. Adhesion of the chorionic villi to the myometrium prevents placental abruption.

The pregnant uterine bed has a large blood supply. In normal situations, limited bleeding occurs after delivery as part of placental abruption. Continuous uterine contraction contributes to the closure of bleeding blood vessels. When placenta accreta, it may or may not be partially separated; In both cases significant bleeding occurs. The degree of invasion of the villi is related to the intensity of the bleeding. Attempting to give birth by hand will make the bleeding worse.

Attachment of the placenta to the uterus does not cause pain. Prenatal diagnosis of placenta accreta occurs by ultrasound observation or when clinical suspicion exists. However, if delivery does not occur, moderate to severe pain may occur as a result of uterine contractions. As with bleeding, assisted or manual delivery is painful and contraindicated.

Statistically, there is a correlation between the number of cesarean sections and the probability of placenta accreta. Cesarean section is surgical aid to pregnancy and both instrumentation and manual delivery are factors that can damage the endometrium.

In women, it refers to the short period between one pregnancy and another. This results in a uterine structure that may not have fully recovered from the previous pregnancy.

Age is an important factor to consider in terms of the possibility of placenta accreta. The uterus undergoes the same aging process as other organs. The risk of placental adhesion due to accreta increases with age. Age over 35 has been identified as a cause of placenta accreta as well as a risk factor.

Removal of benign myometrial tumors involves not only manipulation of the uterus, but also the formation of residual scarring.

In cases of abortion, uterine curettage is a way of cleaning the endometrial surface. This is done to remove remnants of the placenta and to prevent bleeding due to their retention. It is a process that can cause scarring as well as endometrial or myometrial lesions.

It is a syndrome caused by the presence of endometrial scar tissue that causes the change or absence of menstruation. It is called intrauterine synechia (adhesions) induced by uterine curettage or endometriosis. Asherman’s syndrome makes it difficult to get pregnant, but when they do occur, the condition becomes a major risk factor for the presence of placenta accreta.

Manual removal of an abnormally adherent placenta has been described as an alternative, particularly in true placenta accreta. However, the preferred treatment is total hysterectomy. The Royal College of Obstetricians and Gynecologists (RCOG) has produced a guideline for the management of placental accreta. Early diagnosis and follow-up of the patient are vital in pregnancy. Therefore, the expectant mother should be informed about the possibility of hysterectomy and should be guided correctly. Key factors to consider to ensure a good outcome in a hysterectomy:

Other conservative techniques have been described. Uterine artery ligation or embolization in addition to the use of methotrexate to resolve placental union. Currently, therapeutic behavior is aimed at performing hysterectomy immediately after scheduled cesarean section.

Complications of placental adhesion can be avoided with early diagnosis, pregnancy follow-up and appropriate medical treatment. When the presence of Placenta Accreta is unknown, the diagnosis is a finding at the time of delivery or cesarean section. The prompt action of medical personnel will determine the prognosis of the picture. Complications that may result from Placenta Accreta include: