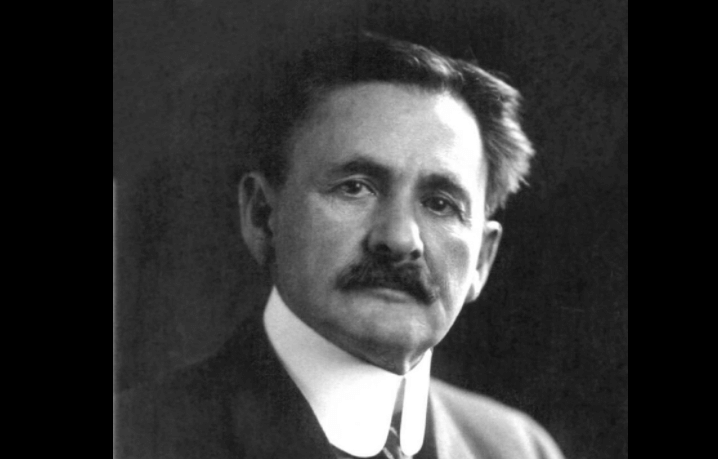 He was an infant when his parents moved to America. In 1873 he was graduated at the United States Naval Academy, served as science instructor there in 1875-1879, took graduate courses in physics in Berlin, Heidelberg, and Paris, and in 1883, having resigned from the navy, became professor of physics at the Case School of Applied Science in Cleveland, Ohio. From 1889 to 1892 he was professor of physics at Clark University, and from 1892 until shortly before his death in 1931 headed the department of physics of the University of Chicago. As a young instructor at Annapolis, he improved an apparatus invented by J. B. Léon Foucault and in 1879 announced new figures for the velocity of light in a vacuum. Shortly afterwards he developed his interferometer, which established the wave length of light as a practical unit of measure. At Sèvres, France, in 1892, he measured the standard meter, expressing his results in units based on the wave length of the red spectrum in the light emitted by a cadmium arc (1,553,16 31/2 units). He also developed the echelon spectroscope, making possible the first accurate measurement of the diameter of a star in 1920. A new figure expressing the speed of light (186,270 miles per second), announced in 1933, after Michelson’s death, was made possible largely by a new series of experiments which he began in 1926 and in which he used a one-mile-long vacuum pipe equipped with mirrors.

The best known of Michelson’s experiments was first performed in 1881, conducted on a more elaborate scale in 1887 in collaboration with Edward William Morley (1838-1923), and subsequently repeated and refined by these and other scientists. Called the Michelson-Morley experiment, it was designed to measure the “drag” exerted on the passage of light by a hypothetical, stationary medium known as the “luminiferous ether,” in the hope of fixing the absolute speed at which the earth moved through space. By its negative results, the experiment eliminated the concept of a motionless, measurable ether and cleared the way for the development of the theory of relativity. Michelson was the first American scientist to win a Nobel Prize, being granted the award in physics in 1907. He published Velocity of Light (1902), Light Waves and Their Uses (1903), Studies in Optics (1927), and some 75 scientific papers.