Inertia; is the resistance of matter to changes in its state of motion. In classical times it was thought that each terrestial object had its proper place and that if an object were displaced, a force would act to restore it to its place. Aristotle observed that, in ordinary experience, forces were required to maintain terrestrial objects in motion and that when the applied force ceased, the object would come to rest. More than 2,000 years later a series of experiments with objects sliding down inclined planes led Galileo to essentially opposite conclusions. His celebrated principle of inertia, a direct consequence of these experiments, laid the foundation for the science of mechanics. 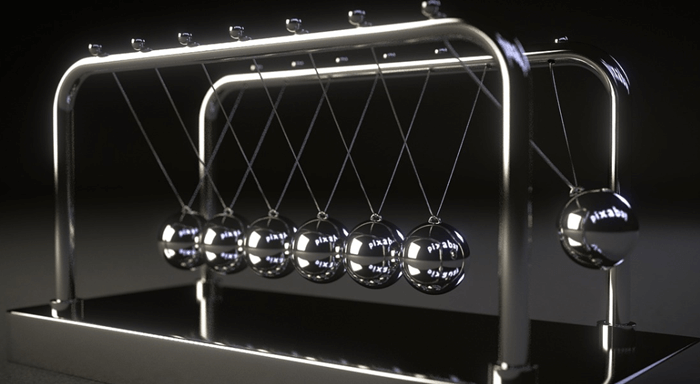 With minor modifications, Sir Isaac Newton established Galileo‘s principle as the first law of classical mechanics: In the absence of external forces, objects at rest remain at rest, and objects in motion remain in uniform linear motion. Newton’s second law of mechanics restates this principle in quantitative terms: The force applied to an object is equal to the product of its mass and its acceleration (F = ma). It was evident to Newton that this principle could appear to be valid only to those observers whose frames of reference (called “inertial frames”) were neither accelerating nor rotating in some absolute sense. For example, a ball on the level floor of a train accelerating relative to the earth will begin to roll backward; an observer in the train might conclude that Newton’s second law is false, since no force appears to be acting on the ball. However, in this example, the inertial frame of reference is more nearly that of the earth rather than that of the train. The ball is maintaining its original velocity relative to the earth, in accordance with Newton’s laws.

Almost two centuries later Jean Foucault demonstrated, by monitoring the rotation of the plane of oscillation of a pendulum, that the surface of the earth is not an inertial frame but that the local inertial frame appears to be at rest relative to the fixed stars. The Austrian physicist Ernst Mach stated that the concept of absolute motion is meaningless, and one must therefore conclude from Foucault’s experiment that the phenomenon of inertia is a consequence of a physical interaction between local objects and the distant fixed stars. This vague statement, now known as “Mach’s principle,” was established on firmer footing by Albert Einstein with his general theory of relativity. A major triumph of Einstein’s theory is that Newton’s laws of motion need not be assumed but rather appear as a consequence of the theory.

Mach’s principle is contained within Einstein’s theory in the sense that the local inertial frames are influenced by the distribution and motion of all the matter of the universe. Under the reasonable assumption that this matter is distributed approximately uniformly, it is a consequence of the Einstein theory that the local inertial frame is at rest relative to the fixed stars, in conformity with Foucault’s experiment.