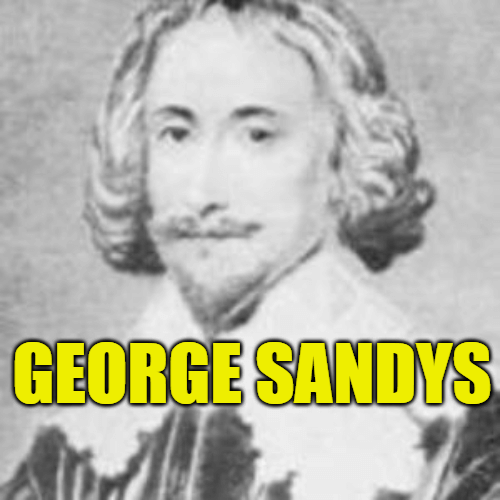 George Sandys; (1578-1644), English poet, traveler, and Virginia colonist, whose use of the heroic couplet paved the way for its use by Dryden and Pope. Sandys was born in Bishopsthorpe, Yorkshire, on March 2, 1578. He studied at Oxford and later traveled in France, Italy, Türkiye (Turkey), Egypt, and Palestine, publishing an account (1615) of his journeys that was of considerable ethnological and geographical value. He was appointed treasurer of the Virginia Company in 1621, succeeding his brother, Sir Edwin, and sailed for Virginia soon afterward. He was treasurer until 1625 and was appointed a member of the council in 1624 and again in 1626 and 1628. In 1631, after some controversy concerning his alleged infringements of the rights of other settlers, he returned to England.

While in Virginia, Sandys completed his translation of the first ten books of Ovid’s Metamorphoses (1626), upon which his reputation as a poet largely rests. His use of a very syntactically balanced form of the heroic couplet anticipated the efforts of Dryden and Pope, who made it the major vehicle of English neoclassical poetry in the 18th century. He also was the author of A Paraphrase upon the Psalms of David and upon the Hymnes Dispersed throughout the Old and New Testaments (1636) and translated Hugo Grotius’ Christ Passion from the Latin (1640). Sandys died in Boxley, near Maidstone, Kent, on March 4, 1644.