Galileo Galilei (1564-1642). Galileo, who is nearly always known by his first name, was a great Italian scientist and astronomer.

Galileo was born at Pisa, Italy, to a poor but noble family that came from Florence, also in Italy. He was sent to school at the monastery of Vallombrosa, near Florence, and at this time disliked science. He had many natural gifts and became a good musician as well as an amateur painter.

In 1581 Galileo went to study medicine at Pisa University. One day, as he was watching a hanging lamp as it swung to and fro in the Cathedral of Pisa, he realized that it took almost exactly the same time for each swing, whether the swings were large or small. From this he saw that a pendulum could be used to measure time. Soon afterwards he accidentally overheard a geometry lesson and as a result persuaded his father to let him study mathematics and science instead of medicine.

When he was 25 Galileo became mathematical lecturer at Pisa University and there made his famous experiments on falling objects. For many hundreds of years people had believed that heavy objects fell more quickly than light ones, but nobody had actually made an experiment. Galileo went to the top of the Leaning Tower of Pisa and dropped objects of different weights, and they all reached the ground in the same time. However, his ideas, and his scornful treatment of people who disagreed with him, made him unpopular in Pisa and he resigned his post in 1591.

The next year he became professor of mathematics at Padua, where he stayed until 1610. In 1609 he heard a description of the newly invented telescope, and immediately made a telescope for himself. The first one he made had a magnification of 3 (it made things look 3 times bigger than they did to the naked eye), but he soon made one with a magnification of 32. This helped him to make a number of astronomical discoveries that were impossible without a telescope. On January 7, 1610, he became the first man ever to see that the planet Jupiter has four moons revolving round it. 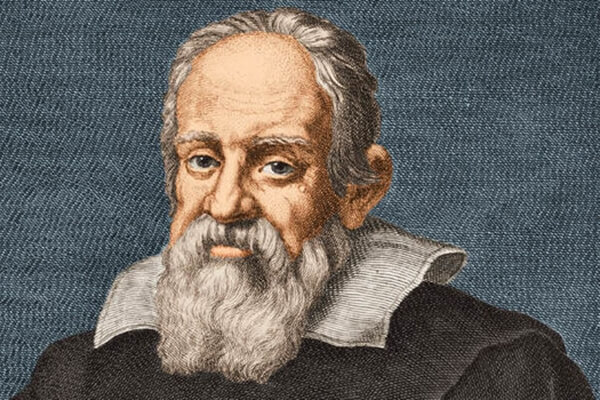 At this time most people stili believed in the theory of Ptolemy, the Greek astronomer of the 2nd century a.d. who had taught that the Earth was the centre of the universe and that all the other heavenly bodies circled round it. However, Nicolaus Copernicus (1473-1543), a Polish astronomer, had said that the Sun, not the Earth, is the centre of the solar system and that the planets, including the Earth, all revolve round it. Galileo’s discovery gave support to Copernicus’ idea.

Galileo published a book in 1613 called Letters on the Solar Spots (sun spots), and in it declared his belief in Copernicus’ theory that the Earth goes round the Sun.

This brought Galileo into conflict with the Roman Catholic Church which still believed in the teaching of Ptolemy and said that all Christians were to believe in it. In 1616 the Pope made him promise not to hold, teach or defend the ideas of Copernicus. Galileo went to live quietly in Florence and continued his studies, but he did not write very much. In 1632, however, he published his Dialogue on the two Principal Systems of the World in which he again supported the theory of Copernicus. The book was praised all over Europe, but Galileo was called to Rome by the Inquisition and ordered, under threat of torture, to deny his beliefs. He did so, and was permitted to return to his own house, on condition that he did not leave it.

In 1636 Galileo published another important book, the Dialogue on a New Science, which explained his ideas about the new science of mechanics, later developed by the English scientist Sir Isaac Newton, who was born in 1642, the year of Galileo’s death.