Atherosclerosis; is a disease in which deposits of cholesterol and other fatty substances line the walls of the arteries. At first, these deposits involve only the innermost layer of the artery wall, but as the disease progresses, they affect the entire wall, causing it to become thick and inelastic and narrowing the channel through which the blood flows.

In the advanced stages of atherosclerosis, various complications may occur. One of the most serious of these complications occurs when a blood clot forms in the narrowed artery. Unless the clot is dissolved or is removed through surgery it may cut off the flow of blood to the tissue normally supplied by the artery, resulting in the death of the affected tissue. This kind of complication often occurs in the major arteries that carry blood to the brain and to the extremities. It also frequently occurs in the coronary arteries, the small blood vessels that supply the heart tissue, and is a major cause of heart attacks. 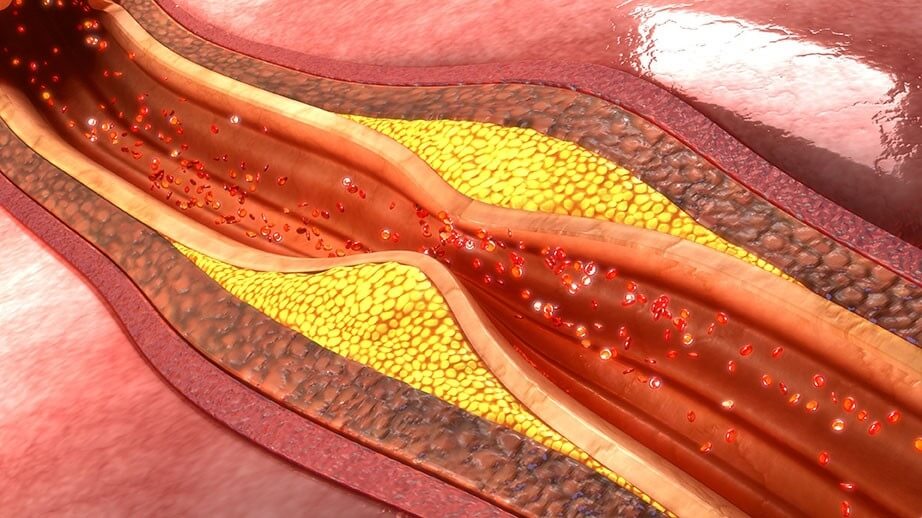 There is no single cause of atherosclerosis. Instead, the disease has many causes, with the various factors having different relative roles in different people. Diet is generally a key factor. Diets rich in calories, saturated fats, cholesterol, sugar, and salt have been found to play an important role in producing several of the traits and abnormalities that intensify the disease process. Among these abnormalities are obesity, high blood pressure, diabetes mellitus, and high levels of cholesterol and other fatty substances in the blood. All four of these traits are important risk factors; their presence is associated with a significant increase in the probability of developing an atherosclerotic disease.

Cigarette smoking is another major risk factor, and a lack of exercise also increases a person’s tendency to develop the disease. Other traits that have been implicated include high levels of uric acid in the blood plasma and certain personality traits and behavior patterns. In addition, it has been found that a susceptibility to atherosclerosis may be inherited. A person whose close relatives suffer the disease prematurely is more likely to develop atherosclerosis than a person with no family history of the disease.

The symptoms of atherosclerosis vary greatly, depending on the organ involved and the severity of involvement. Often the disease is present for years but produces no symptoms. When illness finally develops, it frequently takes the form of heart disease, usually a heart attack, heart failure, or angina pectoris (chest discomfort brought on particularly by exercise, meals, or excitement). Stroke is another major manifestation of atherosclerosis. In addition, the disease may produce high blood pressure, especially if it involves the arteries supplying the kidneys. If the disease involves the major arteries supplying the legs, it may produce pain in the calves of the legs after walking.

As a result of our knowledge of the causes of atherosclerosis, the disease can often be prevented. Rich diets, sedentary habits, and cigarette smoking can almost always be avoided or corrected. High blood levels of cholesterol and uric acid, as well as hypertension, obesity, and diabetes can be detected in early adulthood and can usually be controlled through special diets, drugs, or exercise. Mounting evidence indicates that this approach is indeed effective. It is also effective in the long-term care of patients who have recovered from one or more episodes of atherosclerotic disease, for purposes of preventing recurrent attacks.

Once atherosclerotic disease is present, there are many forms of treatment for bringing relief and aid to the patient. These measures include closed-chest heart resuscitation and intensive care for patients during the first days after a heart attack. For patients with angina pectoris there are various drugs (for example, nitroglycerin) to relieve pain and dilate the heart and coronary arteries. Digitalis and diuretic drugs are helpful for heart failure patients, and anticoagulants can be used to prevent blood clots from forming. Various electronic devices can be used to break episodes of abnormal heart rhythms or to pace the heart (establish a proper heart rate) when it is beating at an abnormally slow rate. In addition, there are surgical procedures that can be used to make the blood bypass severely atherosclerotic arteries, restoring the normal flow of blood to the vital organs.