Catherine The Great (Catherine 2) (1729-1796), empress of Russia from 1762 to 1796, was known as Catherine the Great. She was born Princess Sophia Augusta Frederika of Anhalt-Zerbst in Stettin (now Szczecin, Poland) on April 21, 1729. In 1744 she was betrothed to Grand Duke Peter, nephew and heir of Empress Elizabeth of Russia. In June 1744 she embraced the Orthodox faith, being rechris-tened Yekaterina (Catherine) Alekseyevna, and on Aug. 10, 1745, she was married to the Grand Duke.

During 17 unhappy years of married life with Peter, Catherine endured public humiliations and threats of divorce, which she survived only because she enjoyed good relations with Empress Elizabeth. The marriage resulted in the birth of one child in 1754, the future Emperor Paul I, toward whom Catherine displayed near loathing. However, she was capable of maternal affection, as can be seen in her relations with her grandson, the future Emperor Alexander I. As grand duchess, Catherine cultivated good relations at the court and nurtured her desire for power.

At the death of Elizabeth on Dec. 25, 1761, the Grand Duke ascended the throne as Peter III. Peter showed open contempt for Russia and its people. His decision to send Russian troops against Denmark to benefit the duchy of Holstein, of which he was duke, precipitated a plot to remove him from the throne. Catherine, though no more Russian than her husband, displayed her sympathy for the Russian national feelings of Peter’s subjects. A minor German princess with no blood tie to the ruling dynasty, Catherine had an extremely weak claim to the throne, but her closest supporters, officers of the palace guard, brushed aside all obstacles, including a plan to install Catherine as regent for her son Paul. She was acclaimed reigning empress on June 28, 1762. The deposed Peter was subsequently murdered, possibly with Catherine’s tacit consent. 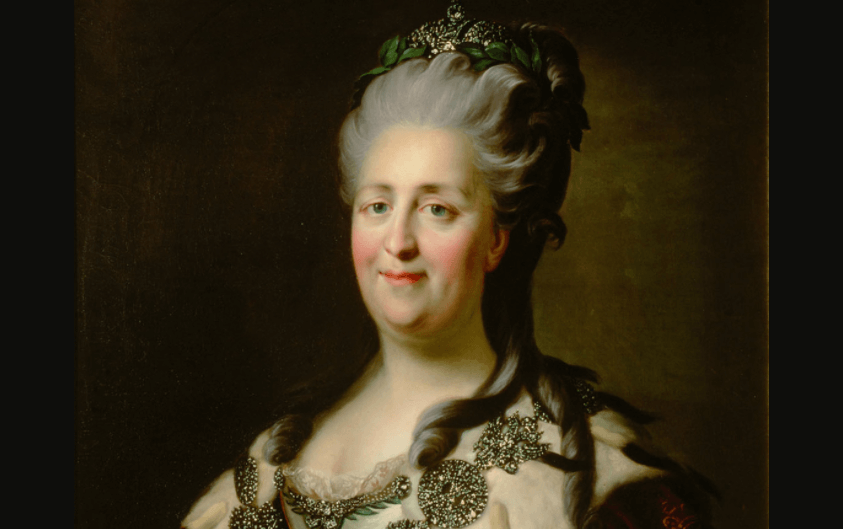 Catherine’s German origin and the unusual circumstances of her accession made it necessary for many of her early measures to be directed toward consolidating her power. She became a defender of the Orthodox faith and the nation, and took various steps to win the political support of the nobility. Unlike her immediate predecessors, Catherine took a personal interest in state affairs and was a diligent monarch. Her early pronouncements on statecraft and reform met the highest standards of the Enlightenment. Many of these sentiments, however, proved little more than rhetorical flourishes when the time came to implement progressive programs or abolish the worst social abuses in the realm. At the same time that she declared herself to be a disciple of Voltaire and Diderot, she handed over tens of thousands of state peasants into personal bondage by distributing them as gifts to her favorites and members of the nobility.

Catherine conducted an animated correspondence with the leading thinkers and statesmen of her time and, in addition to her famous Memoirs, wrote plays, fables, satires, and political and historical tracts. However, she imposed the first formal censorship in Russia. Her persecution of the writers Aleksandr Radishchev and Nikolai Novikov reveals her true attitude toward freedom of expression. Catherine was an avid collector of art works, and those in the Hermitage became the foundation of a Russian national collection of world art.

She was sensuous and was never restrained by conventional moral standards. As empress she had a succession of 10 lovers, all of whom held positions in the government. At least three of them, Grigori Orlov, Grigori Potemkin, and Platón Zubov, exercised great political influence.

Catherine conceived of a grandiose reform of the Russian government based on her celebrated Nakaz (Instruction) of 1767, a document that owed its chief ideas to the writings of Montesquieu and Cesare Beccaria. A legislative commission met from 1767 to 1768 to act on Catherine’s proposals but was dismissed by the Empress before it had a chance to draft a single reform. Local and central administration demanded reform, nevertheless. In 1775 new agencies of provincial administration were created by decree, and in 1785 the Charter of the Towns endeavored to organize the urban population for greater self-government. Both reforms increased the number of officials and administrative cost but did little to raise government standards.

The Charter of the Nobility of April 1785 had a more substantial effect on the social and political structure of the empire. Increased exactions by the nobles had led to mass flights of serfs and to frequent, scattered peasant uprisings, culminating in the revolt of 1773-1774, led by Yemelyan Pugachev. This revolt demonstrated the urgent need for reforms, but its failure ended any hope of improvement. By the new charter the nobility were organized into self-governing corporations to deal with local affairs, and the power of noblemen over serfs living on tjjieir estates, great as it was, was further broadened.

The foreign policy of Catherine was chiefly concerned with Poland, Turkey, and Sweden, and, at the end of her reign, with limiting the influence of the French Revolution. A Russo-Prussian alliance concluded in April 1764 was aimed at maintaining a weak and divided Poland. Catherine intervened more seriously in Polish affairs in 1768 and provoked the alarm of Turkey, Austria, and Sweden. Austria was accommodated by being made a party to a partition of Poland in 1772, which cost Poland one third of its territory. Polish attempts at reform and at reducing Russian influence in the country resulted in a Russian invasion and a second partition in 1793, followed by a final partition in 1797, which erased Poland from the map of Europe.

Two wars with Turkey, 1768-1774 and 1787-1792, ended with Russian annexation of the Crimea, portions of the Caucasus, and of territories between the Dniester and Bug rivers, and freedom of passage for Russian merchant vessels through the Bosporus and the Dardanelles. Catherine’s grand design to restore the Byzantine Empire and create a kingdom of Dacia in the Balkans remained unfulfilled, but her territorial gains mark her foreign policy as perhaps her greatest achievement. Catherine died of apoplexy in St. Petersburg on Nov. 6, 1796.