The March equinox or equinox to the north is the equinox on Earth when the subsolar point appears to leave the southern hemisphere and cross the celestial equator, heading northward as seen from Earth.

In the Gregorian calendar, the equinox to the north may occur as early as March 19 or until March 21. For a common year, the calculated time slip is approximately 5 hours 49 minutes later than the previous year, and for a leap year about 18 hours 11 minutes before the previous year. Balancing the increases of the common years against leap year losses prevents the March equinox calendar date from moving more than one day from March 20 of each year.

In astronomy, the March equinox is the zero point of the sidereal time and, consequently, the right ascension. It also serves as a reference for calendars and celebrations in many human cultures and religions. 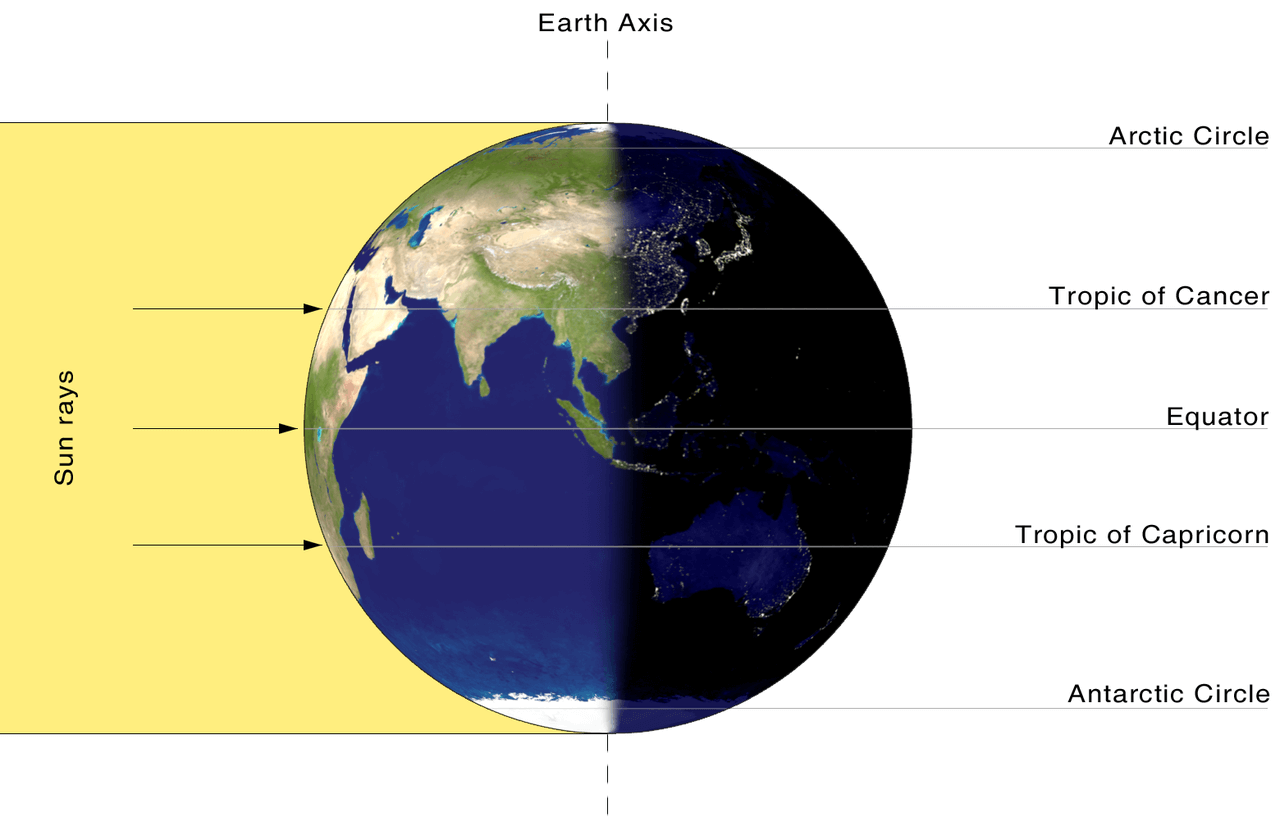 Illumination of Earth by Sun on the day of an equinox (Source : wikipedia.org)

The point where the Sun crosses the celestial equator to the north is called the Aries First Point. However, due to the precession of the equinoxes, this point is no longer in the constellation of Aries, but in Pisces. For the year 2600 will be in Aquarius. The Earth’s axis causes the First Aries Point to travel westward through the sky at a rate of approximately one degree every 72 years. Based on the modern boundaries of the constellation, the equinox to the north passed from Taurus to Aries in the year -1865 (1866 BC), passed to Pisces in the year -67 (68 BC), will pass to Aquarius in the year 2597 and it will pass in Capricorn in the year 4312. It passed (but not in) a ‘corner’ of Cetus to 0 ° 10 ‘away in the year 1489.

Apparent movement of the sun

In its apparent motion on the day of an equinox, the disk of the Sun crosses the Earth’s horizon directly eastward at dawn; and again, about 12 hours later, directly to the west at nightfall. The March equinox, like all equinoxes, is characterized by an almost equal amount of day and night light in most latitudes on Earth.

Due to the refraction of light rays in the Earth’s atmosphere, the Sun will be visible over the horizon even when its disk is completely below the Earth’s extremity. Also, when viewed from Earth, the Sun is a bright disk in the sky and not just a point of light, so it can be said that sunrise and sunset begin several minutes before the geometric center of the sun crosses the horizon and extends equally afterwards. These conditions produce differentials of real durations of light and darkness in various places on Earth during an equinox. This is most noticeable in the most extreme latitudes, where it can be seen that the Sun travels laterally considerably during sunrise and night, attracting the transition from day to night. At the north and south poles, the Sun seems to move constantly around the horizon, and just above the horizon, without rising or separating from a slight change in the declination of approximately 0.39 ° per day when the equinox passes.

The Babylonian calendar began with the first full moon after the vernal equinox, the day after the return of the Sumerian goddess Inanna from the underworld (later known as Ishtar), at the Akitu ceremony, with parades through the Ishtar Gate to the Eanna temple, and the ritual recreation of marriage with Tammuz, or the Sumerian Dummuzi.

The Persian calendar begins each year at the equinox to the north, determined by observation in Tehran.

The Indian national calendar begins the year on the day following the vernal equinox on March 22 (March 21 in leap years) with a month of 30 days (31 days in leap years), then has 5 months of 31 days followed by 6 30-day months

The reform of the Julian calendar lengthened seven months and replaced the intercalary month with an intercalary day that will be added every four years until February. It was based on a length for the year of 365 days and 6 hours (365.25 d), while the average tropical year is about 11 minutes and 15 seconds less than that. This had the effect of adding approximately three quarters of an hour every four years. The effect accumulated from the beginning in 45 BC until the sixteenth century, when the northern spring equinox fell on March 10 or 11