CRICKET, any of a large group of insects known mostly for their chirping noises. Crickets are found in nearly all parts of the world where plants grow. At times, they become so abundant that they cause serious damage to crops. 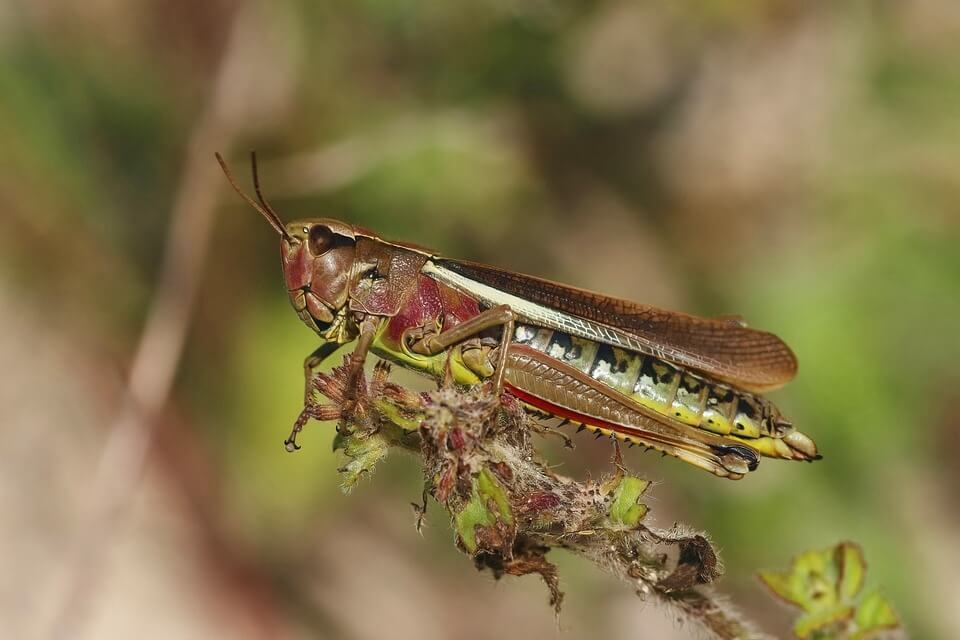 Perhaps the most common species of cricket in North and South America is the field cricket, Acheta assimilis, which is found in dwellings, particularly in rural areas, as well as in fields. The field cricket is dark brown to black. It has long slender antennae; four wings that lie flat, one over the other, on top of the body; and a pair of prominent appendages (cerci) at the end of the abdomen. Each leg has three tarsal segments, and the hind pair of legs is developed for jumping. Females have a long, spear-shaped ovipositor. Both sexes have hearing organs located on the upper part of the fore tibia, but only males can sing or chirp. The males produce sound by elevating their upper pair of wings and rubbing one wing over the other. Studies have shown that these chirps serve as calling songs to attract females, as courting songs to induce mating, and as fighting songs to repel other males. Eggs are laid in the soil in the late summer; they hatch in the spring, and new adults appear by midsummer.

The house cricket, Acheta domesticus, frequents dwellings and may eat holes in clothing and household furnishings made of cloth. It is the species known as the “cricket on the hearth.” House crickets are amber to light brown in color. They usually hide during the day and are active at night; they are sometimes attracted to artificial light. The life cycle and structure of the house cricket are similar to those of the field cricket.

Both field and house crickets are raised and sold as fish bait. They are also used as experimental animals in scientific laboratories.

Mole crickets differ markedly from other crickets. They are heavy-bodied, short-winged insects with pointed heads, beadlike eyes, powerful front legs adapted for burrowing, and brown velvety coats of hairlike setae. Their hind legs are not adapted for jumping, and the females do not have an ovipositor. Mole crickets burrow in damp soil and feed on the roots of various plants. They often seriously damage food crops, principally in the sandy soil areas of southern North America.

Ant-loving crickets are minute, wingless, hump-backed insects that live in ant nests, where they feed on the ants’ oily secretions.

Other insects, known as Mormon crickets, camel or cave crickets, and Jerusalem crickets are not really crickets. They are closely related to meadow grasshoppers and katydids, but are called crickets because they superficially resemble them.