Information about the Sumerian Water God Enki, myth, story and facts. The role of Enki in the Sumerian Mythology.

Enki; The Sumerian water gad of Eridu. Along with An the gad of heaven, Enlil the air gad, and Ninhursaga the earth mother, Enki was a creator deity. Priesrs often dothed themselves in a garment in the form of a fish, when officiating at rituals of purification, symbolic of the deansing power of Enki as the god of lustration. The fish may refer to a Babylonian legend about Ea, the god’s Akkadian tide meaning ‘lord of the house of water’, which was the sweet water beneath the ground named Abzu by the Sumerians. In remote times, according to this myth, when men lived in a lawless manner like beasts, Ea appeared from the sea. Part man and part fish, the double-headed gad instructed men in handicrafts, farming, letters, laws, architecture, and magic. He softened the primitive rudeness and since that time nothing has been added to improve on his teaching. After a day of instruction Ea retired into the sea, whence the divine fish man made only three other appearances over a period of thousands of years. 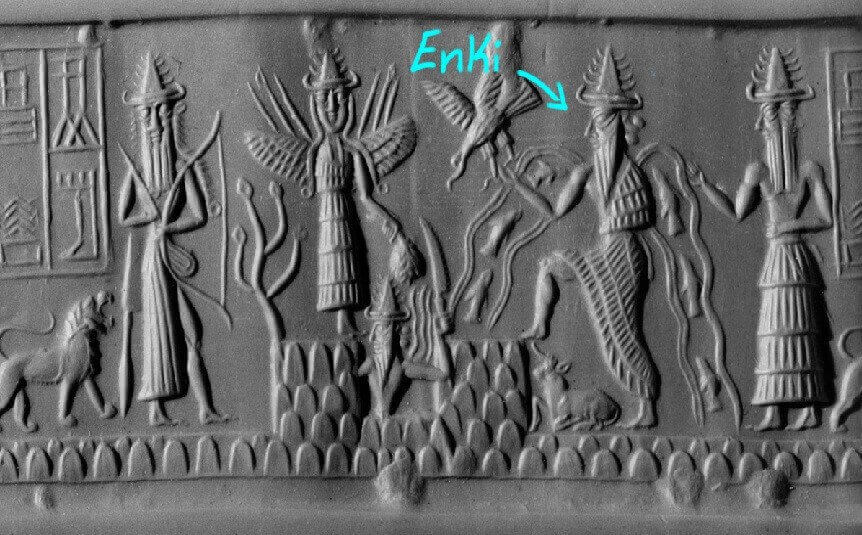 Enki figures in a Sumerian myth which is a parallel to die Hebrew story of Adam and the Garden of Eden. In paradisal Dilmun, now identified with Bahrain in the Persian Gulf, he water gad lived with Ninhursaga; it was a happy place, where anİma s did not harm one anoth’er, and neither sickness nar old age was known. The only thing wanting had been sweet water, and this Enki provided-his union with the earth mother turned the island into a fruitful garden. A quarrel arose when Enki devoured eight plants grown by Ninhursaga. She pronounced on him the curse of death. it was eHective: sickness attacked eight parts of his body, to the dismay of the other gods. Enlil was powerless to arrest Enki’s dedine, the situation appeared hopeless. Then the fox spoke up. It offered to bring Ninhursaga back to Dilmun, providing there was suitable reward. This happened and the earth mother created eight deities to heal her consort’s afflictions. .

There are obvious similarities between this myth and the biblical picture of paradise. In Genesis ‘there went up a mist from the earth, and watered the whole ground’, white the eating of forbidden plants is distinctly reminiscent of the tree of life in Eden. The very idea of a divine paradise, a garden of the gods, ‘was of Sumerian origin. Eve, Adam’s spouse, and ‘the lady of the rib’, Ninti, the goddess created to heal Enki’s side, also have something in common. We know that there was ‘planted up on Abzu’ a sacred tree, kiskanu, which acted as the central point for rituals. Though the term ‘tree of life’ does not occur in any surviving Mesopotamian text, it can be deduced from pictorial representations of ritual observances that the tree played a significant role.

A Sumerian legend concerning the creation of man begins with the gods lamenting how difficult it was for them to get food. Roused from his slumbers, Enki acceded to their request for servants, and fashioned ‘out of day’ mankind. it was he who gaye warning of the deluge to Ziusudra, the pious King of Sippar. The gods, having tire d of their mortal helpers, decided to annihilate the inhabitants of the earth.