Stephen Crane; (1871-1900), American writer, whose novels and short stories introduced into American literature an uncompromising realism, which paved the way for the sociological novels of Frank Norris, Theodore Dreiser, and their literary descendants. Crane’s realism, however, is often more impressionistic than photographic; his interest in psychological probing, his innovations in technique and style, and his use of imagery, paradox, and symbolism give much of his best work a romantic rather than a naturalistic quality. Both realism and symbolism, the two major directions of modern fiction, have their American beginnings in Crane’s work. 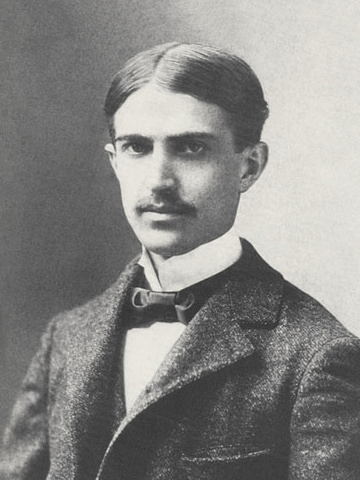 Stephen Crane was born in Newark, N. J., on Nov. 1, 1871, the 14th child of a Methodist minister. Both of his parents did some writing; two of his brothers became newspapermen; and Crane himself began writing stories at the age of eight. He attended Lafayette College and Syracuse University, but when his mother died in 1890 (his father had died ten years earlier), Crane went to live and write in New York.

Crane had a romantic craving to live prodigiously, to make his body a “testing ground for all the sensations of life.” His first novel, Maggie: A Girl of the Streets (1893), which he had started at college, reflects his familiarity with the Bowery and slum life in New York. He earned his living as a freelance newspaper writer, and after the publication of The Red Badge of Courage: An Episode of the American Civil War (1895), he began to receive better reporting assignments. He sought experience as some men seek fame, in the American prairies and Southwest, and as a war correspondent in combat areas in Mexico, Greece, and Cuba, where he saw what war was really like after having written about it so effectively in The Red Badge of Courage. His ship was wrecked en route to Cuba in 1896, and with a small party of other passengers he spent four days drifting in an open boat before being rescued. This experience gave him the material for one of his greatest short stories, The Qpen Boat, but it also impaired his health permanently.

In Florida Crane met the remarkable Cora Taylor, proprietress of a well-known Jacksonville brothel. Partly to escape her past, and partly because of the abuse and ridicule the American press had bestowed on his work, especially his first collection of poetry, The Black Rider and Other Lines (1895), Crane and Cora went to England, where they were married in 1898. Crane was lionized in England, where The Red Badge of Courage was greatly admired, and became a friend of Joseph Conrad, Henry James, H. G. Wells, and Ford Madox Ford. After a fruitless attempt to improve his health in Greece, he sought medical help in Germany, but died of tuberculosis at Badenweiler on June 5, 1900.

Crane’s first novel, Maggie: A Girl of the Streets, was considered “too cruel” and was refused by all the publishers to whom it was submitted. Finally Crane had it printed himself, under a pseudonym, with money borrowed from his brother. The book was generally ignored, but it won the admiration of other realist writers, including Hamlin Garland and William Dean Howells.

The Red Badge of Courage, which Crane described as “a psychological study of fear,” made him famous, but brought him very little money. It was followed by two other novels—George’s Mother (1896) and The Third Violet (1897); several short-story collections— The Little Regiment (1896), The Open Boat and Other Tales of Adventure (1898), The Monster and Other Stories (1899), and Whilomville Stories (1900); and a volume of poems, War Is Kind (1899). The Works of Stephen Crane, edited by Wilson Follett, was published in 12 volumes in 1925-1926.