Scarlet Fever; Scarlet fever usually begins with some of these symptoms: sore throat, vomiting, fever, headache. The rash is not apt to appear for a day or two. It begins on the warm, moist parts of the body, such as the sides of the chest, the groin, the back where the child has been lying. From a distance it Iooks like a uniform, red flush, but if you look at it more closely, you can see that it is made up of tiny red spots on a flushed skin. It may spread over the whole body and the sides of the face, but the region around the mouth stays pale, The throat is red, sometimes very angry, and after a while the tongue usually gets red, first around the edge. You should, of course, call the doctor if your child has fever and sore throat. 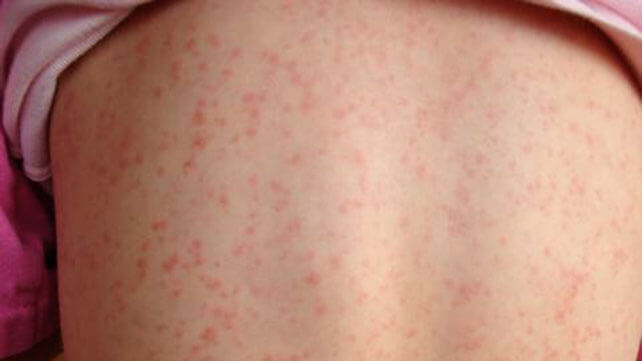 Nowadays scarlet fever is not apt to be so severe as it used to be. It is not an entirely separars disease with a germ of its own, like measles. It is caused by one type of the common streptococcus, which produces sore throats, swollen glands, ear abscesses, in other people. Scarlet fever is just one form that a streptococcus infection can take, most commonly, between 2 and 8 years of age. We understand that a child who develops scarlet fever probably picked up a germ from someone who just had a sore throat or was carrying the streptococcus without feeling its effect at all.

Scarlet fever should be treated promptly and carefully with one of the modem drugs that shorten the disease and greatly lessen the chances of complications. The common complications are ear infections, swollen glands in the neck, nephritis (which produces blood in the urine), rheumatic fever. Chilling is suspected of bringing on complications. They may begin any time in the disease, but most commonly 10 to 15 days af ter the fever has come down, when the child seems to be completely recovered. That is why a scarlet-fever case is watched carefully for a full 3 weeks. The child should be examined regularly, and you should keep in elose touch with the doctor until he is really well. Report promptly any new symptoms, such as ear pain, swelling of the neck, redness or scantiness of the urine, arthritis, any return of the fever.