Scarlet Fever is an acute, contagious respiratory infection characterized by sore throat, a diffuse skin rash, and later by desquamation, or scaling off, of the skin. It is sometimes known as scarlatina. Scarlet fever is caused by infection with any serological type of group A streptococcus that produces erythrogenic toxin—that is, a toxin that produces a rash. 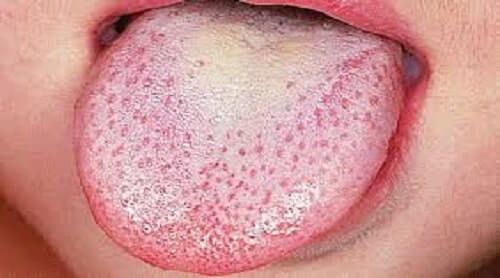 The disease, which occurs primarily in the first decade of life, was an important cause of death in children prior to the 20th century. Since then the incidence has declined markedly, and death is now rarely observed. Important advances in the study of scarlet fever were made by the American husband-and-wife team of George Frederick Dick and Gladys Henry Dick, who developed the so-called Dick test for determining susceptibility to scarlet fever.

The group A streptococcus responsible for scarlet fever characteristically causes an infection of the throat and tonsils, which is associated with sore throat, headache, fever, and tender, enlarged lymph nodes at the angle of the jaw. The onset is sudden, with an incubation period of two to three days. Vomiting may be an early symptom in the young child. When a skin rash does not appear, the disease is termed streptococcal sore throat, still one of the common respiratory infections. The development of a skin rash is dependent on two factors. First, the streptococcus must produce erythrogenic toxin. Second, the patient must be susceptible to this toxin. Many individuals are not susceptible, presumably because they have been infected previously with strains of streptococci that produce small amounts of toxin. The toxin stimulates the production of immune bodies, which subsequently neutralize toxin when it is produced by a new group A streptococcal infection.

Those patients who contract scarlet fever develop the rash within 48 hours of the first symptoms. The eruption appears first on the sides and front of the neck, spreads down the chest and abdomen, and finally involves the extremities. The palms and soles are usually not involved. The rash begins as a diffuse erythema with super-imposed small red spots. It fades on pressure, and it is intensified in the folds of the skin. It persists for only a few hours in a mild attack but for as long as five days in a severe case. During convalescence a branny desquamation occurs, especially over the ears, palms, and soles. In scarlet fever the tongue is usually covered by a white coat through which red spots are observed—the “strawberry tongue.” Later, the coat is lost, and the tongue is more like a raspberry.

The complications of scarlet fever and streptococcal sore throat are identical, although suppurative, or pus-producing, foci are more common in scarlet fever. These include otitis media, mastoiditis, peritonsillar abscess, pneumonia, empyema, and arthritis. Rheumatic fever, with involvement of the heart, occurs in about 2>% of patients. Nephritis sometimes follows scarlet fever that is caused by certain types of group A streptococci. 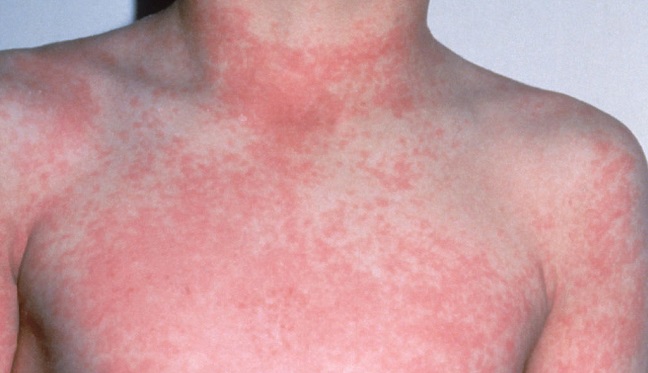 Scarlet fever is spread by intimate contact with a patient or carrier. It is not spread by airborne particles or contaminated fomites. Treatment of the disease is now relatively simple. Penicillin is the drug of choice, but other antibiotics are also effective. Early and adequate therapy eliminates most of the serious complications, including rheumatic fever and acute nephritis. Furthermore, penicillin kills the streptococci so that the patient is rendered noninfectious a few hours after treatment is started. Thus rigid quarantine is no longer a necessary public health procedure.