Certain bats in the tropical regions of the world, particularly the Macroglossinae and Glossophaginae, derive most or all of their nourishment from flowers. A slender and elongated muzzle, a long and extensile tongue with a papillate surface or a brush-like tip, and a reduction or loss of the front teeth enable them to feed successfully on flowers. They feed at night and are probably guided to the flowers chiefly by their well developed sense of smell. A sense of color is probably weak or altogether lacking in these animals. They clamber upon the flower, hold on with their claws, and extract nectar or small insects from the floral chamber with their tongue, or chew the pollen or succulent petals. 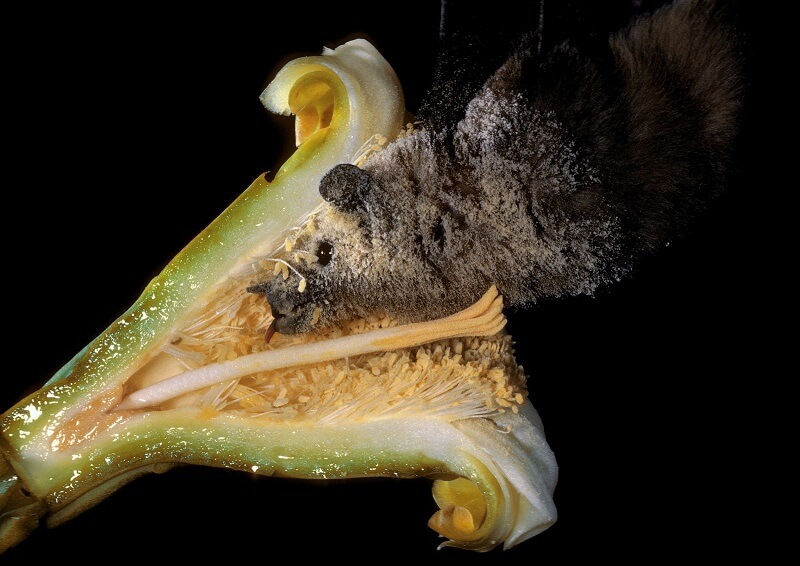 Various tropical trees bear flowers adapted for pollination by bats. The flowers are large in size, frequently dirty-white in color, and open only at night. They attract the bats by a fermenting or fruit-like odor, which is exhaled at night. The flowers are commonly borne on the bark of the trunk or a main branch where they are out of the way of the smaller branches and twigs and are thus easily accessible to the nocturnal visitors. Such flowers develop from buds which, after having lain dormant for years in the wood of the main branches, suddenly become active and burst through the bark. The flowers of the sausage tree (Kigelia) are borne on long, rope-like stems which hang down below the crown of the tree. The flowers in all cases are attached to the plant by a strong stem which supports the weight and clambering movements of the bats. The entrance to the flowers is broad. Bat flowers usually supply a viscid nectar, supplemented by an abundance of pollen, or in some cases edible petals take the place of nectar.

It is a common notion that insects are the most important, if not the only important, animals which pollinate flowers. This idea is certainly true in Europe, where the science of floral ecology had its beginning and richest development. In other parts of the world, however, particularly in the tropics and Southern Hemisphere, the importance of birds as flower pollinators may be equal to or greater than that of insects. Hummingbirds in North and South America, sunbirds in Africa and Asia, honey eaters and lorikeets in Australia, Hawaiian honey creepers in the Hawaiian Islands, and several other groups of birds regularly visit flowers to feed on nectar, small flower-inhabiting insects, and pollen. The bill and tongue of the bird are usually much elongated and otherwise modified for procuring this food. 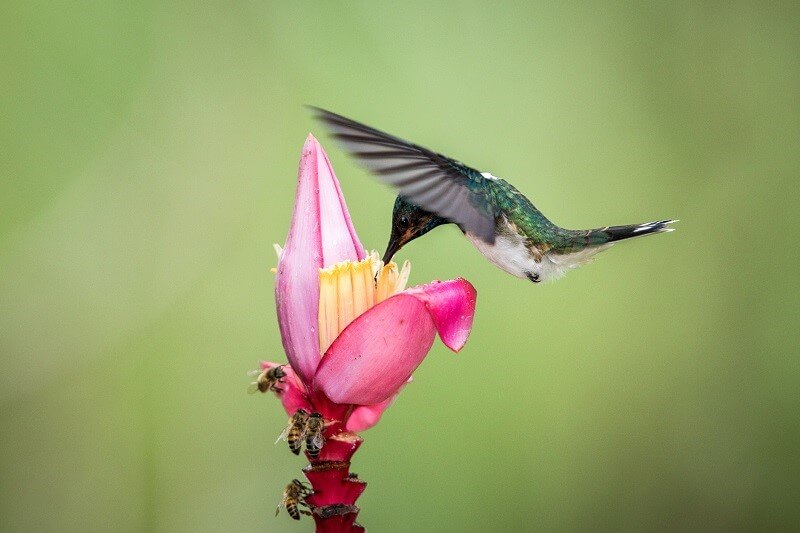 Birds feed in the early morning and during the daytime, and find their food by means of their powerful vision. The sense of smell is very feebly developed. The color sense of birds resembles that of man much more than that of bees, moths, and long-tongued flies. The bird sees a continuous spectrum rather than a series of discrete color groups. Moreover, it sees red but not ultraviolet. Finally, the sensitivity of the eye of the bird, like that of man, is great in the red end of the spectrum, but relatively weak in the region of blue and violet. This is due to the presence of red and yellow oil cells in the light-sensitive retina of the bird’s eye. Birds see their surroundings, so to speak, through red and yellow-tinted glasses.

Hummingbirds commonly suck the nectar of flowers on the wing; sunbirds, on the other hand, clamber on the flower to suck. In either case the bird probes into the floral chamber with a sharp-pointed bill which frequently causes considerable mechanical damage to the inner floral parts. When finished feeding on one flower, the bird may either go to another flower of the same species or to a different species. A rigid instinct to visit the flowers of one species for as long a time as possible, such as that which governs the flower-visiting behavior of bees, hawk moths, and long-tongued flies, is absent in birds, whose behavior is subject to more complex processes of learning and choosing.

Most bird flowers are large and colorful and bloom during the daytime. The most frequent colors are red and yellow, but white and other colors are also common. A great many bird flowers are nearly or quite odorless. Many flowers visited by sunbirds are erect and provide a projecting lower lip or bract which serves as a landing platform, while many hummingbird flowers are pendant and radially symmetrical in outline.

The petals of bird flowers are fused into a tubular corolla which holds copious quantities of thin nectar. The proportions of the corolla frequently correspond to the length and curvature of the bird’s bill. The stamens are usually brightly colored, numerous, and well exserted so that they touch the bird on the breast or head while it feeds. The pollen adheres together in sticky masses or threads. A single pollinating visit thus suffices for the fertilization of scores or hundreds of ovules. These ovules are usually protected from the sharp probing bill of the bird by being situated in a so-called inferior ovary beneath the floral chamber, or behind a sheath formed by the fused bases of the stamens, or on the end of a special stalk.

Some typical bird flowers are the red columbine, fuchsia, passionflower, eucalyptus, hibiscus, escallonia, and many members of the pea, big-nonia, cactus, pineapple, banana, and orchid families. ‘ The Mexican century plant is sterile where cultivated in Europe due to the absence of hummingbirds.