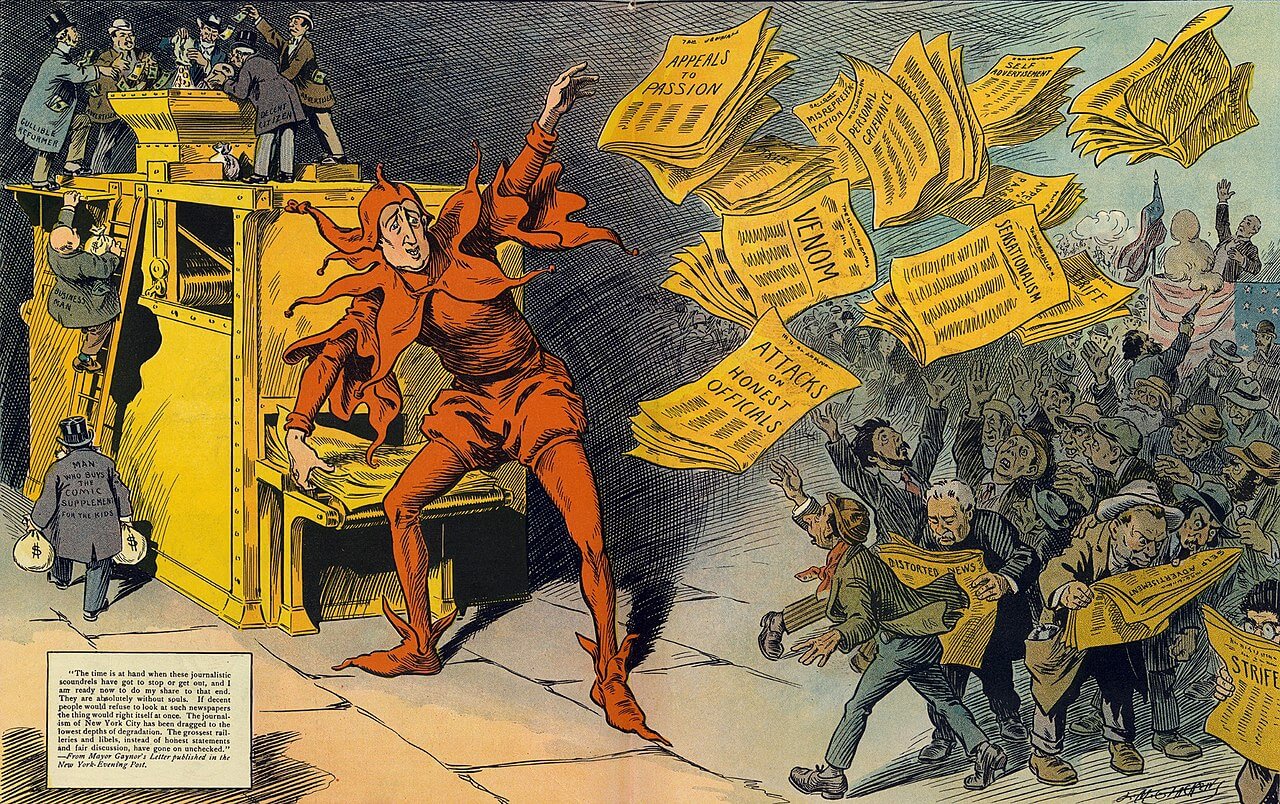 Yellow Journalism; a term synonymous with “sensationalism,” used in the sense that a newspaper or periodical deliberately undertakes to capture reader attention and interest by a contrived emotional appeal basically unwarranted by fact or subject matter. The methods employed are the selection or creation of subject material lending itself to this purpose; the use of appropriate styles of writing, typographical displays, and illustrations; and general promotional publicity.

Although there had previously been sensationalism of some sort or degree in more than one country and over a long period of time, the use of the term “yellow journalism” derives from practices by two New York City newspapers during the latter half of the 1890’s. The New York World had presented what purported to be humorous drawings since 1889, the beginning of comic strip usage. In 1893 the World became a pioneer among newspapers in the use of color. In February 1896 it used its color press to add a yellow tint to a shapeless sacklike garment worn by a gap-toothed young ragamuffin, the central figure in a series of drawings by Richard F. Outcault, portraying fanciful incidents in a city tenement district. This was a novelty, and “the yellow kid of Hogan’s Alley,” as the youngster came to be known popularly, helped to bring new circulation to the paper. 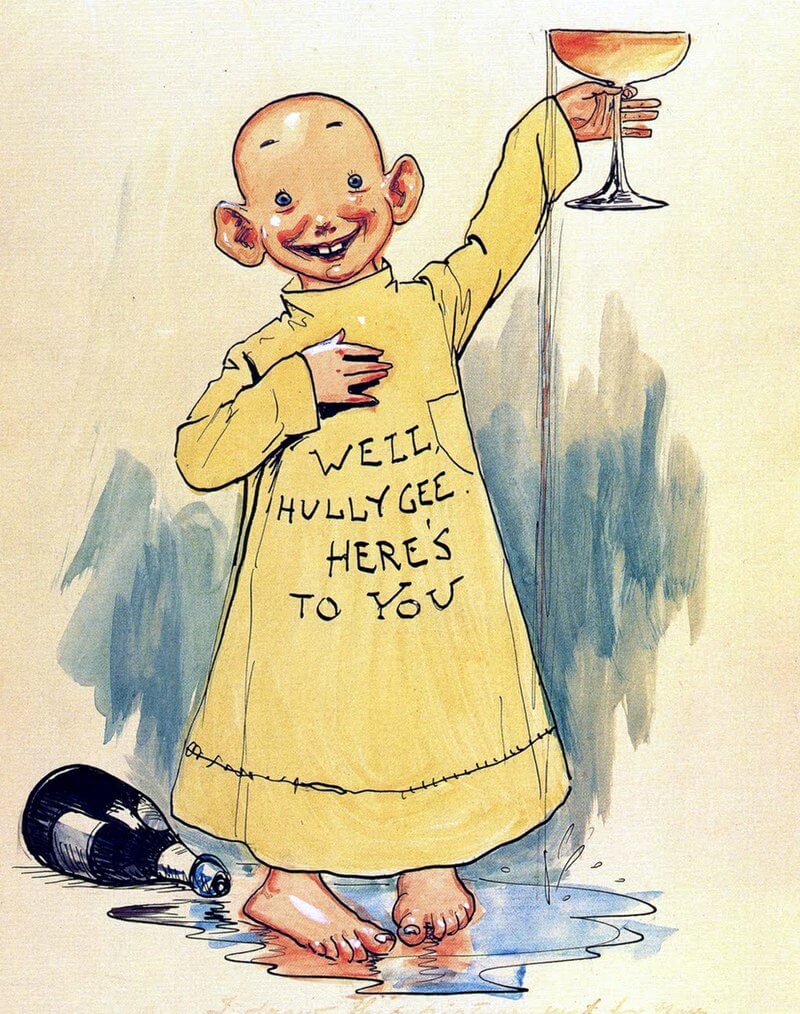 In 1895 William Randolph Hearst, after developing the San Francisco Examiner as his first newspaper, had purchased the New York Journal and entered into direct competition with the World for morning newspaper circulation leadership. Observing the popularity of Outcault’s drawings, Hearst offered him financial inducements to produce the “yellow kid” for the Journal’s Sunday color supplement. This he began to do in October 1896. The World countered by engaging George B. Luks to continue the “yellow kid” in that paper. The rival “yellow kids” were widely publicized throughout the New York area on posters and on the sides of circulation wagons.

At the same time, the Journal and the World were competing for readers by other means, such as seeking news and even creating news that could be written and presented to arouse the greatest emotional response among prospective readers, including buyers at the newsstands and in the streets. This practice involved an emphasis on crime, sex, and violence. It exploited especially the then current revolt of the Cubans against Spanish rule, which led directly to the Spanish-American War in 1898. It involved a resort to typographical extravagances beyond any previously known, including the use of large headlines, some occupying half of the first page or more, frequently printed in lurid colors, and often conveying distorted impressions. This was supported by no less distorted writing and by illustrations specially drawn to create the desired impact. The result was to win for both newspapers the largest circulations so far known anywhere on earth, sometimes exceeding a million copies a day. 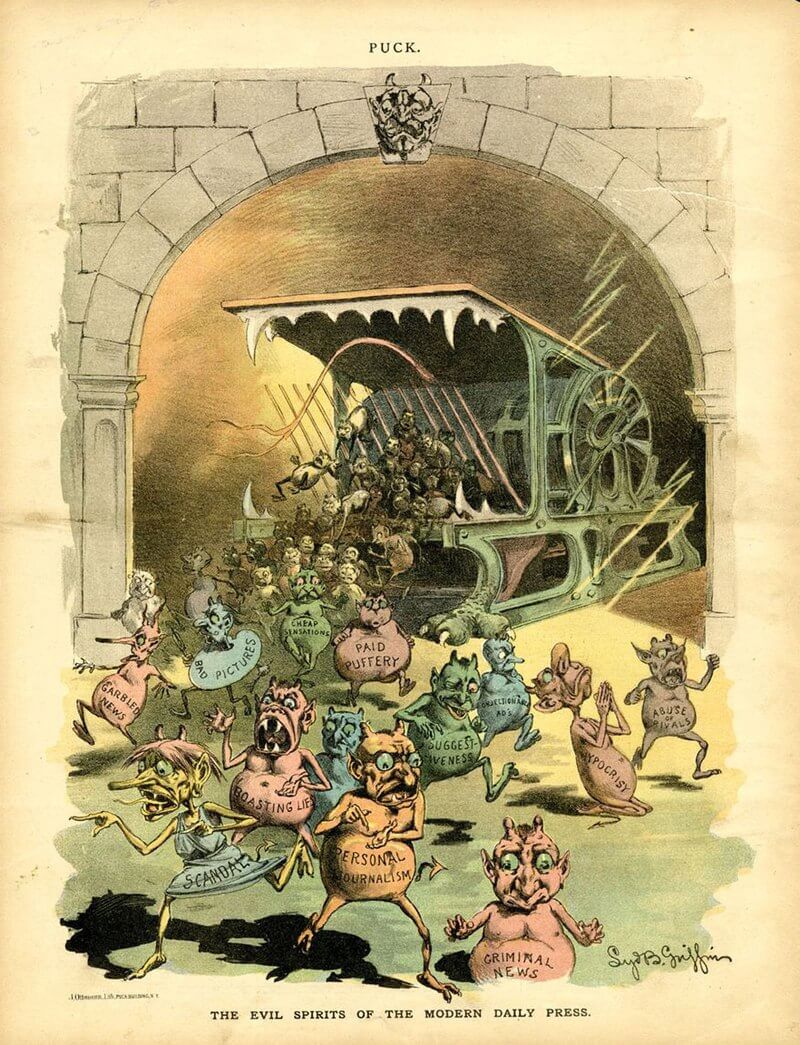 “Evil spirits”, such as “Paid Puffery” and “Suggestiveness”, spew from “the modern daily press” in this Puck cartoon of November 21, 1888 (Source : wikipedia.org)

The excesses to which the papers went, however, offended and outraged many thoughtful citizens and dismayed -competing papers in New York. Ervin Wardman, editor of the New York Press, associated the two manifestations—sensationalism and rival promotion of the “yellow kids”—in a blanket reference to the “yellow press” of New York, from which the use of the term “yellow journalism” in the broader sense evolved.