Who is Ahriman? The Myth, story, history of Ahriman. The role of Ahriman in the Persian Mythology.

Ahriman; The principle of evil in Persian mythology, As Angra Mainya, ‘the destructive spirit’ ,who first introduced death into the world, he led the forces of evil against the host of Spenta Mainya, ‘the holy spirit’, who assisted Ahura Mazdah, ‘the wise lord’-the-final victor of the cosmic struggle. ‘In the beginning,’ said Zoroaster, ‘the twin spirits were known as the one good and the other evil, in thought, word, and deed. Between them the wise chose righdy, not so the fools. And when these spirits met they established life and death so that in the end the followers of deceit should meet with the worst existence, but the followers of truth with the wise lord.’ 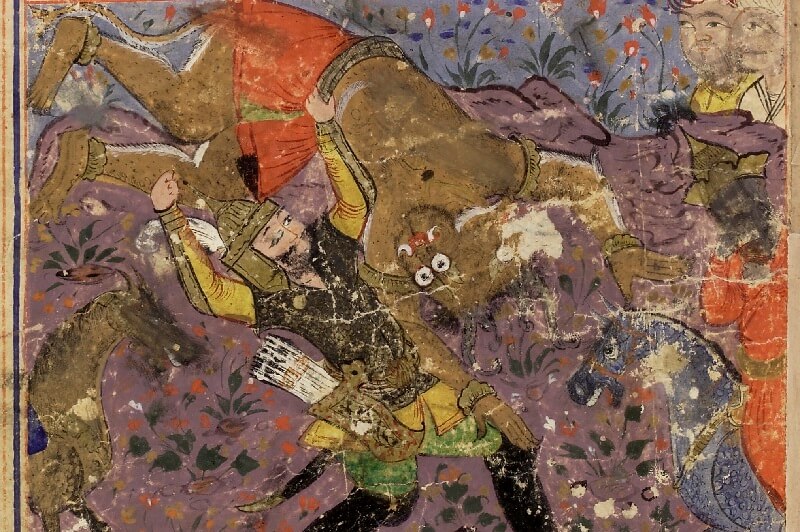 Ahura Mazdah told Zoroaster that Angra Mainya had upset his plans for making Persia into a terrestrial paradise. All the creatures of ‘the wise lord’ were created with free-will: both spiritual beings and men. Angra Mainya, the twin brother of ‘the holy spirit’, simply took pleasure in ‘choosing to do the worst things’. To thwart Ahura Mazdah he introduced frost in winter, heat in summer, all manner of diseases, and the other ills that men have to endure. His creation, too, was the dragon Azhi Dahaka, who brought ruin to the earth. When Ahura Mazdah fashioned the stars in heaven, he ‘sprang into the sky like a snake’ and in opposition to those luminaries formed the planets, whose baleful influence then fell across the world. Throughout creation there was a cleavage and antagonism so deep that under the Sassanians (226-652) there arose a myth to soften the dualism. The twin spirits became the offspring of a single pre-existing primeval being, Zurvan Akarana, ‘infinite time’. Because Zurvan had vowed that the first born should rule as king and Ahriman ‘ripped the womb open’ in order to claim the tide, the evil one was given the kingdom of the world for a limited period. ‘After nine thousand years,’ Zurvan insisted, ‘Ohrmuzd will reign and will do everything according to his good pleasure.’

The chief weapon of Ahriman was az, concupiscence, Zurvan’s gift. ‘By means of his power,’ the donor remarked, ‘all that is yours will be devoured, even your own creation.’ Ahriman accepted because it was ‘as his very essence’. The demonic Az, a female principle, included more than sexual desire: equally it was doubt, a weakening of the intellect. Possibly the idea represents a barrowing from Buddhism, which saw in avidya, ‘ignorance’, and its manifestation, desire, the reason for -the endless round of conditioned being. Az was alsa connected with the Manichaean demon of the same name, ‘the mother of all evilspirits’. In Zoroastrianism, however, the role of woman is by no means clear. Man wasalmost holy, a creation designed to play the foremost part in the destruction of evil. When Ahriman beheld ‘the righteous man, he swooned away.-For three thousand years he lay in a swoon … till the accursed whore’ roused him. Jeh, the whore, coveted man and ‘defiled herself with the destructive spirit’ to obtain her desire. But this idea only found expression in late texts and it -was generally accepted that woman’s role was the propagation of the race.