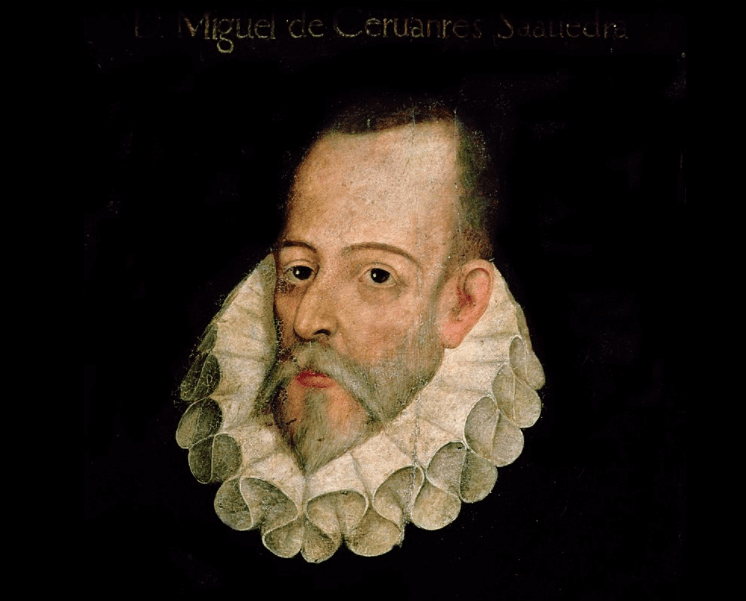 Cervantes wrote a substantial amount of poetry using Italianate as well as traditional Spanish meters. He composed poems on contemporary events, love poems, laudatory verses dedicated to contemporary poets, and such patriotic compositions as the poems on the “Invincible Armada.” He frequently included pastoral poetry in his novels and plays. In his longest poem, Journey to Parnassus, an allegory consisting of almost 3,000 verses in tercets, Cervantes praises the chief poets of his epoch and presents an appreciation of his own works and of the literary genres then in vogue. Despite his herpic efforts to excel in poetry, he was aware of his shortcomings in this genre. He was a good poet but could not rival such contemporaries as Fernando de Herrera, Luis de León, Góngora, Quevedo, and Lope de Vega.

Cervantes was probably Spain’s best dramatist prior to the advent of Lope de Vega. In his prologue to Eight Comedies and Eight Interludes, Cervantes states that between 1581 and 1587 he wrote some 20 or 30 plays. Of these only two are extant: The Algerian Affair (El trato de Argel), a series of scenes lacking in dramatic unity, based on his captivity in Algiers; and The Siege of Numancia (El cerco de Numancia), an allegorical dramatization in praise of Spanish heroism. The Siege of Numancia is based on a historical episode m the 2d century b. c., in which 4,000 Numantians, preferring death to surrender and dishonor, resisted 80,000 Roman soldiers during a long seige that ended with the complete annihilation of the beseiged.

In Eight Comedies and Eight Interludes, Cervantes demonstrates his acceptancc of some of Lope de Vega’s dramatic theories, including the use of three acts instead of four, the abandonment of the dramatic unities, and the use of a variety of themes. He accepts Lope’s principle of verisimilitude by introducing, for comic relief, the figure of the gracioso, a servant who parodies the actions of his master.

Cervantes’ fame as a dramatist derives chiefly from his interludes (entremeses), short comic pieces often satirical in nature. His models for the interludes were the popular one-act plays of Lope de Rueda (1510-1565), some of which Cervantes saw performed in his youth. Cervantes surpassed all other writers of interludes. His are notable for their realistic, lively dialogue, true-to-life characters, benevolent humor that never becomes bitter even when it is satirical, and natural, unaffected style. The Marvelous Puppet Show (El retablo de las maravillas), generally considered the best of his interludes, is a sharp satire exposing the hypocrisy of the inhabitants of a Spanish town, who, in order to demonstrate the purity of their lineage, pretend to see nonexistent action on an empty puppet stage. Other interludes by Cervantes deal with the amorous rivalry between a soldier and a sacristan, in which the latter wins; marital spats and cuckoldry; and a humorous version of the way in which a village elects a mayor.

: Cervantes’ first published work was La Galatea (1585), a run-of-the-mill example of the pastoral novels that were so popular in the 16th century. La Galatea’s plot is complicated and loosely knit, its action is slow, and its style lacks the liveliness, grace, and vigor of Cervantes later prose writings. However, there is present in La Galatea the idealism that was a fundamental constant in his later works.

The Exemplary Tales are contemporaneous with Don Quixote. Had Cervantes never written his great masterpiece, these short stories, which Cervantes called novelas, would have been sufficient to ensure their author’s place among the Spanish literary giants. Cervantes borrowed the word novela from the Italian novella (a short story or tale), the form used in the Decameron of Boccaccio and by other Italian masters. However, although he utilized the external structure of the short story successfully cultivated by the Italian novellieri, Cervantes owes no substantive debt to their writings; his Exemplary Tales are as uniquely his own creation as is Don Quixote.

In his prologue to this collection of 12 tales Cervantes rightfully claims the distinction of being the first to write short stories in Castilian. The prologue further informs the reader that he uses the word “exemplary” in the title because each story will teach some profitable lesson. Realism predominates in some tales, idealism in others, and in some stories realism and idealism are inextricably intertwined. The stories demonstrate Cervantes’ ability to depict with superb perspicacity the life of his fellow Spaniards. Among the best known of them are: The Gypsy Maid (La gitanilla), in which the love affair between the beautiful gypsy girl Preciosa and a young gentleman romantically unfolds amid vividly drawn scenes of gypsy life; Rinconete and Cortadillo (Rinconete y Cortadillo), a delightful story of the adventures of two youths in a section of Seville infested by scoundrels and thieves; The Dialogue of the Dogs (El coloquio de los perros), a satire narrated by the talking dogs Cipion and Berganza; Master Glass (El licenciado vidriera), a satirical censure of contemporary life by a madman who believes himself made of glass; The Jealous Estremenian (El celoso extremeño), the tale of a rich old man who tries to keep his very young bride from committing adultery; and The Illustrious Kitchen Maid (La ilustre fregona), the story of the love between a noble young man and an aristocratic girl disguised as a scullery maid.

Three days before his death, Cervantes wrote the last lines of his extensive Byzantine novel The Exploits of Persiles and Sigismundo (Los trabajos de Persiles y Sigismunda), which was published in 1617. In this baroque novel filled with adventures of sheer fantasy, the author pays little heed to the psychology of the characters. 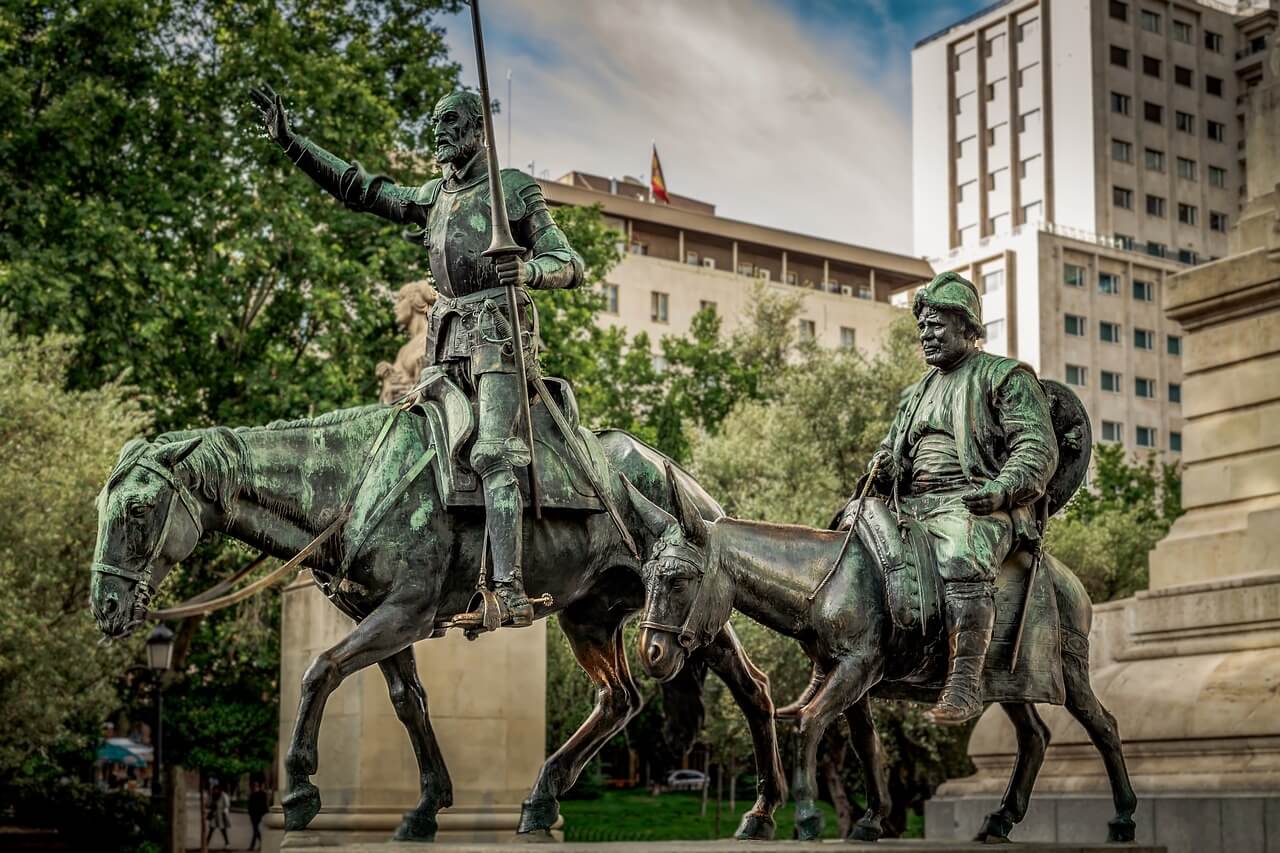 The greatest work in Spanish literature is Cervantes’ The Ingenious Gentleman Don Quixote of La Mancha (El ingenioso hidalgo Don Quijote de la Mancha), known simply as Don Quixote, the first part of which was published in Madrid in January 1605. Part I is divided into four very unequal sections and consists of 52 chapters. It gained a good measure of immediate popularity, as evidenced by the six subsequent editions that appeared in that year. During Cervantes’ lifetime, 16 editions of Part I were published, including translations into English and French, and hundreds of copies were shipped to the New World. In 1614, using the pseudonym Alonso Fernández de Avellaneda, an unknown author (whose identity has still not been uncovered) published an apocryphal continuation of the adventures of Don Quixote. The publication of this book undoubtedly urged Cervantes into finishing the second part of his masterpiece, which he published at the end of 1615. Part 2, which was not divided into sections, consists of 4 chapters.

In the prologue to the first part of Don Quixote, Cervantes informs the reader that his work is “an invective against books of chivalry.” It is quite possible that Cervantes initially planned to parody the novels of chivalry that had enjoyed tremendous popularity in the 16th century but were becoming unfashionable by the beginning of the 17th century. The influence of such romances of chivalry as Montalvo’s Amadis of Gaul and Francisco de Moraes’ Palmerin of England is patent in Don Quixote.

The novel describes a series of adventures in which Don Quixote, like a knight-errant in a chivalric novel, endeavors to right the injustices of the world about him. On his first expedition, Don Quixote is alone and rather promptly returns home battered and bruised. He then con