What are the varieties of cactus plant? How to grow cactus? Information about cactus cultivation, flowers and fruit. 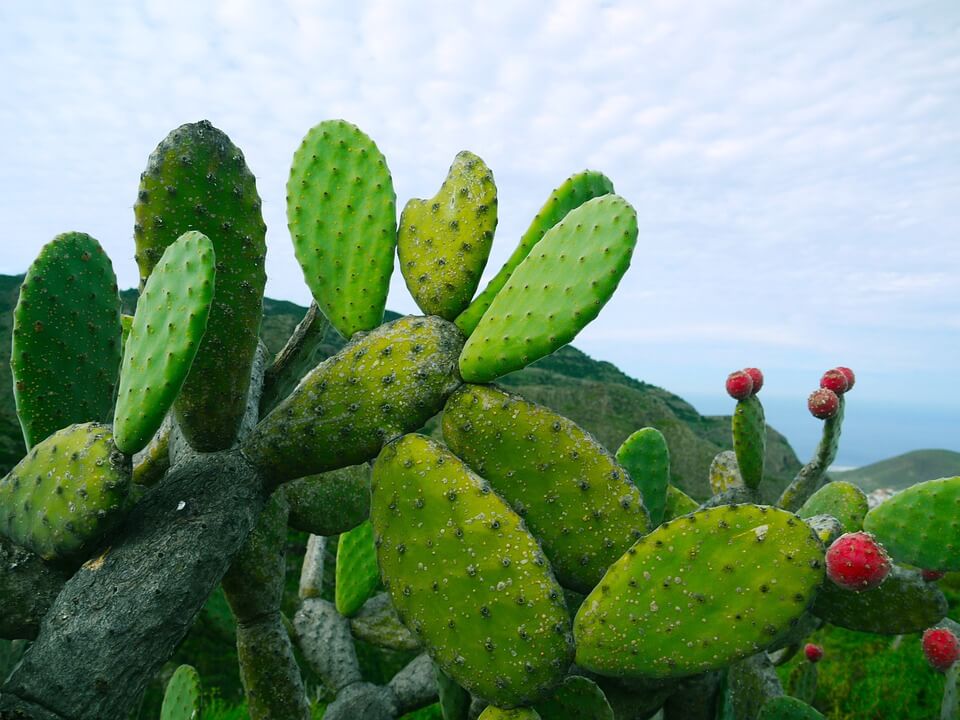 CACTUS, any of a family of flowering plants generally characterized by fleshy stems, clustered spines, and flowers with many petals. The cactus family (Cactaceae) comprises more than a thousand species that commonly inhabit dry to desert areas in the New World from Canada to southern Chile. A small number of these plants grow in tropical rain forests, and a few of these in the genus Rhipsalis are found in Africa and Ceylon. Cacti have been introduced to various parts of the world, and in Australia the prickly pear (Opuntia) became a serious weed pest until brought under control by certain moths (Cactohlastis), which were imported from South America.

Several other plant groups with either or both spines and fleshy parts are often confused with cacti. Century plants, some ornamental milkweeds, and the yuccas, with which cacti are most often confused, have flowers with few petals.

Cacti are basically like most other flowering plants, but with considerable specialization of parts. With the exception of two genera (Pereskia and Pereskiopsis), persistent, functional leaves are not produced, although small, short-lived leaves appear at the stem joints of many cacti. The function of photosynthesis has been almost entirely taken over by the fleshy, green stems, which have well-developed water-storage tissue making up most of their bulk. The surface of the stem has a waxy coating that retards evaporation from the plant, and masses of spines and hairs often clothe the stem, further restricting water loss by evaporation.

The stem may be barrel-shaped or otherwise unbranched, but more commonly it is jointed and branched either from the base or at various points along its length. The joints, or segments, of the stem are sometimes rounded, but those of the prickly pears are flattened and referred to as pads. Sometimes the terminal (top) joint is so loosely attached to the joint below that even the slightest contact causes it to become detached from the plant and its spines imbedded in an animal or person that brushes against it. This is the basis of the popular term “jumping cactus.” Cactus stems may be smooth, as in most of the prickly pears, but more often they have well-developed longitudinal ridges or spirally arranged bumps (tubercles). Spines, which are really modified leaves, are produced in clusters at the tips of the tubercles or at regular intervals along the ridges in special localized regions called are-oles. Areoles are modified branches. Many cacti also have minute, barbed bristles, known as glo-chids, which also arise in the areoles. Although contact with cactus spines is unpleasant, people are more often bothered by the irritating and hard-to-remove glochids.

Cactus stems, which vary among die species from about 2 inches (5 cm) to more than 50 feet (15 meters) tall, are often an important part of the desert environment in which they grow. Several animal groups are closely associated with cacti: some birds nest in hollows in the stems, and certain species of fruit flies have evolved in such close association with them that they breed only in stem cavities of a single species. Cattle graze on cactus pads in some arid areas where range grasses are insufficient to support herds. The wood of the stems of some of the giant cacti occurs in the form of a hollow, latticelike cylinder; it is useful for the construction of simple shelters, animal corrals, and for novelty furniture. 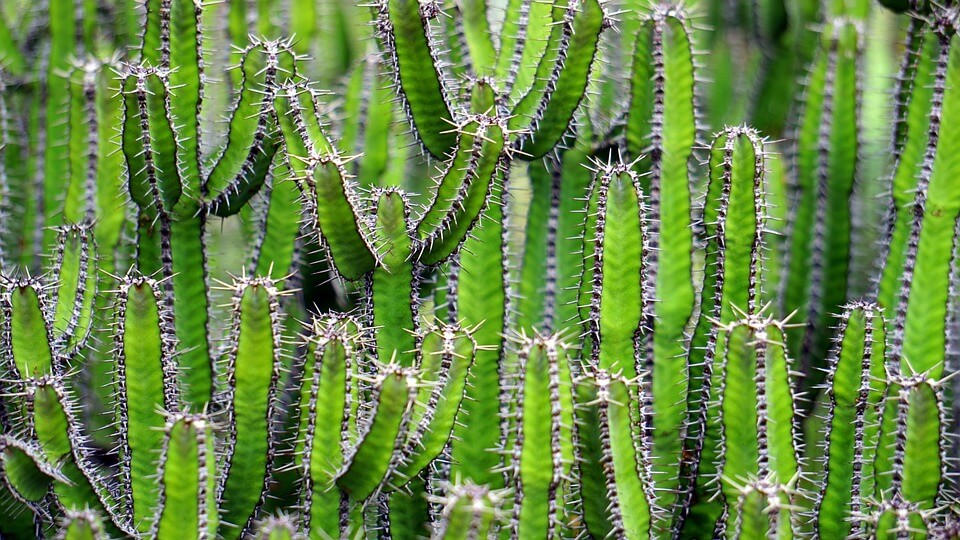 The flowers of cacti vary in color from white or creamy to red, purple, orange, and copper. They are usually borne singly on the fleshy stems and arise from the areoles that produce the spines or from special areoles nearby. The sepals, the outermost flower parts, are often not distinguishable in form or color from the petals, as they are in most flowers, and there is sometimes a gradual transition in color from sepals to petals. Both sepals and petals occur in large numbers in overlapping spirals. The bases of the petals and sepals are joined in a common tube of varying length; the tube is attached to the top of the ovary and bears numerous stamens (pollen-producing organs) on its inner surface. Cactus flowers open under a variety of conditions: some open only at night and die in the early hours of the next morning, while others last just through the daylight hours of one day.

The stigma, the pollen-receiving surface of the pistil (seed-producing organ), has 5 or 10 rays that arise from the tip of a single style, or stalk, of the pistil. The ovary has a single chamber within which large numbers of seeds are attached to the inner walls. The fruits vary in size from that of currants to that of large pears, and many not only have a pleasant taste but are highly nutritious. They are eaten by many animals, and prickly pear fruits are a secondary food source in desert areas; in the southwestern United States, they also appear in the market.

Botanically, the cactus family is divided into more than 100 genera. But for convenience, the commoner species of North American cacti may be placed into 5 groups: the prickly pears, the saguaro cactus group, the hedgehog cacti, the barrel cacti, and the pincushion and fishhook cacti.

The stems of the saguaro cactus group are cylindrical, up to 50 feet (15 meters) tall, and furnished with a number of longitudinal ribs along the crest of which the spine-bearing areoles are regularly spaced. Included in this group, in addition to the giant saguaro cactus (Carnegiea gigantea), are the clambering night-blooming cereus (Hylocereus undatus and others), and the organ-pipe cactus (Lemaireocereus marginatus). The saguaro and the organ-pipe form extensive forests in many arid localities in the southwestern United States.

The hedgehog cacti (Echinocereus) grow either as solitary plants or in low clumps up to 3 feet (1 meter) or more in diameter and up to 1 foot (30 cm) tall. The stem is cylindrical or pear-shaped and is covered by a series of longitudinal, continuous ribs bearing areoles with spines.

The stems of the barrel cacti (Echinocactus) vary from columnar to egg-shaped and sometimes grow in clumps; they range in size from about 2 inches (1 cm) tall to as much as 12 feet (3 1/2 meters). The flowers arise from special areoles just above spine-bearing ones, and the fruits are covered by scales rather than spines, unlike those of the genera described above.

Stems of the pincushion (Mammillaria) and fishhook (Ferocactus and Ancistrocactus) cacti usually form low clumps not more than 1 foot (30 cm) tall. Instead of longitudinal ribs, large numbers of cylindrical, pyramidal, or conical tubercles cover the stem surface. Areoles at the tips of each tubercle produce spines that are either straight or shaped like fishhooks; the fish-hook-shaped spines were actually used for fishing by Indians and frontiersmen. The flowers arise from between tubercles or along their sides, but not from the tips, and the fruit lacks spines, scales, or hairs. 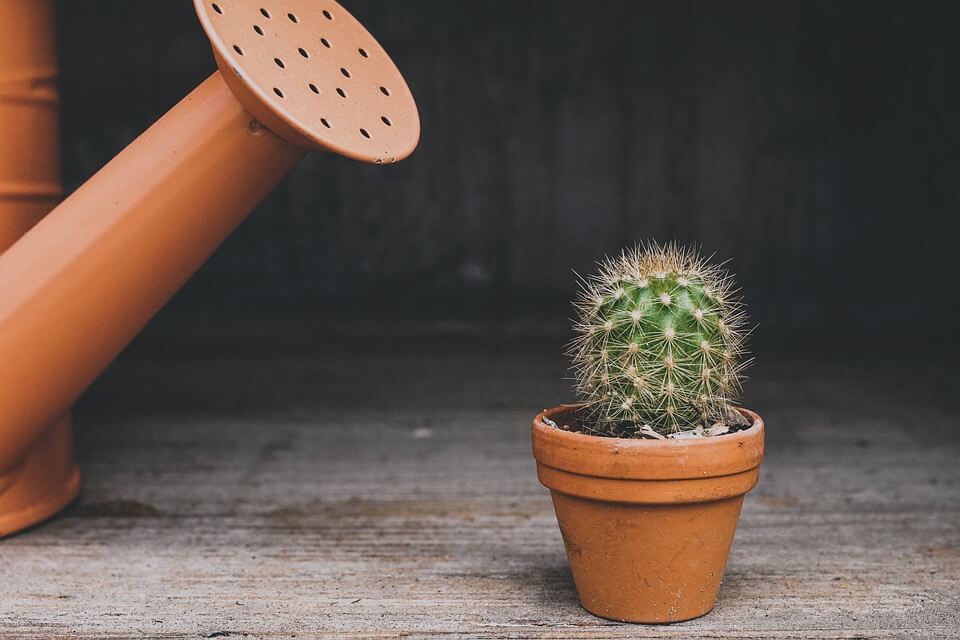 Cacti are frequently cultivated, either outdoors in specially prepared garden plots or indoors in greenhouses or on window ledges. They require a sunny location and either a neutral or slightly alkaline soil, although in other respects they show a wide tolerance of soil conditions. Standing water or waterlogged soil around the base of the stem usually results in rotting and death of the plant.

Cacti may be propagated from seed collected fresh from the fruits. By careful tending, many new plants can be obtained from a single fruit. Some kinds grow readily from cuttings, others from stem joints, as with prickly pears. Many cacti transplant readily from the natural habitat either into gardens in arid areas or into pots indoors. Pots of the appropriate size should be filled with a layer of coarse gravel for drainage, followed by a 3-inch (1-cm) layer of ordinary potting soil, and finally coarse, clean sand with small quantities of hydrated lime mixed in it to fill the pot. Since the root systems of cacti are shallow, only a few inches beneath the soil surface, it is important to avoid more than the most superficial disturbance of the soil around each plant. The broken surfaces of cuttings and plants taken from the wild should be dried for several days in a well-ventilated shady place before planting.

Seedlings must be watered daily, but older plants may be watered at much longer intervals. Cacti in gardens should not be watered at all following the onset of low winter temperatures.

In the case of such large, columnar species as the saguaro and similar forms, it is advisable to secure root stubs of the transplanted cactus to steel rods driven into the soil. Large rocks around the stem base will also help to prevent overturning by wind.