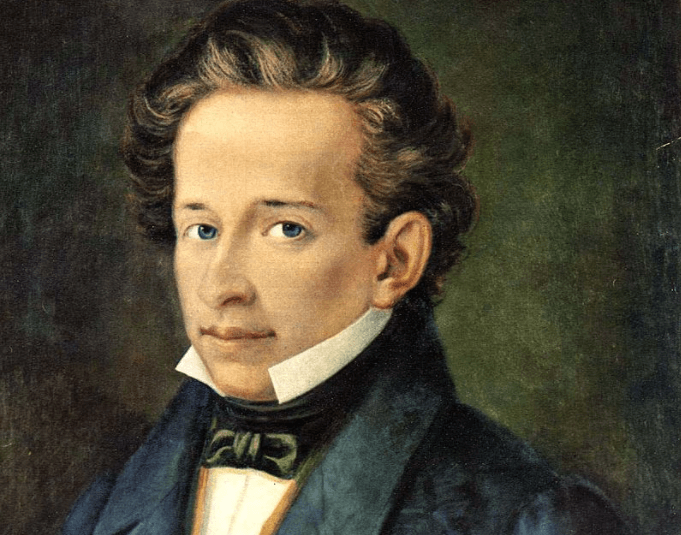 Giacomo Leopardi; (1798-1837), considered by many to be the greatest Italian lyrical poet of modern times. In his poetry, the finest written in Italy since that of Torquato Tasso in the 16th century, Leopardi was able to set aside his immense erudition and to write with beguiling simplicity. The introspective tradition of Petrarch and Tasso is continued in Leopardi’s work in a freer, flawless form.

Leopardi was born in Recanati on June 29, 1798. Frail and sickly, he had to endure a cold and unsympathetic home environment. Young Giacomo’s learning soon outstripped his tutor’s, so from the age of 12 he pursued knowledge alone. Besides learning* Latin, Hebrew, and a number of modern languages, he mastered Greek so well in the span of a year that his hymn to Neptune was taken to be an ancient Greek work. At 15 he wrote a history of astronomy. His encyclopedic knowledge, inspired by dreams of glory, found expression in commentaries, translations, critical revisions of rare texts, and other writings.

The exhaustion resulting from his concentrated study damaged Leopardi’s health and left him with a permanent spinal deformity. Physically unattractive, he despaired of finding love, and his loneliness was almost unbearable. When parental permission to leave home was granted tardily in 1822, he went to Rome for a few months. On returning to Recanati he quickly wrote a thousand pages of his almost endless prose work, Zibaldone (published posthumously in 7 volumes, 1898-1900), in which—interspersing original reflections with notes based on other thinkers—he forsakes Christianity for a materialistic and mechanistic interpretation of the world.

Soon after, Leopardi published Canzoni (1824), a collection of poetry, and Le operette morali (1827), consisting chiefly of prose dialogues, often delightfully ironic. In 1830 he moved to Florence, where he met Fanny Targioni-Tozzetti, who inspired a number of poei published Canti, a fuller collection of his poetry in 1831. His last years were spent with his close friend Antonio Ranieri, a young Neapolitan Leopardi died in Naples on June 14, 1837.

Leopardi’s works reflect his character, which was lofty and sensitive. He tended to idealize friends, women, and patriotic heroes and when reality fell short of his idealizations he was filled with a sense of rebellion. His difficulties in relating to the world were not merely social, but of cosmic proportions. Man’s desire for pleasure, he declares, is infinite, but his ability to achieve it almost nil.

Leopardi’s poetry is redeemed from his philosophical skepticism and pessimism-though perhaps never entirely—by exquisitely impressionistic idyllic passages. The smallest sensation are intensified psychologically and aesthetically. In many poems the breaking of an idyl by a coda of sad reflections produces a fragmentary effect. His purest poetry is void of sorrow and pessimism. Leopardi’s philosophic prose, like much of his poetry, tends to destroy the illusory values that it has created—the ideals of love, patriotism and the sense of life itself.