What is friction? How is friction overcome? An experiment to understand how does the friction acts.

Resistance must often be overcome when objects are moved and work is done. This kind of resistance is caused by friction, which means rubbing. Whenever two materials are rubbed against each other, there is friction between them. You can easily slide on smooth ice or a waxed floor, because there is little friction. But you can hardly slide at all on a rough board or a concrete sidewalk, because there is much friction. These rougher materials push hard against your shoes. That is, there is a lot of friction between your shoes and the rougher materials. 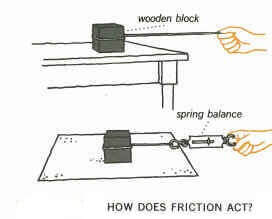 1. Tie a cord around a smooth wooden block and pull the block across the top of a desk or table. Does it take much force to move the block? How do you know?

2. Set a brick on the block and pull it across the desk or table as you did before. Is more force needed this time? Why?

3. Now repeat the experiment, using a rough board or a concrete sidewalk instead of the desk or table. Is more force needed to move the block? Why?

4. If you have a spring balance, fasten it to the cord and measure the force needed to move the block in each part of the experiment.

The surface of every solid material is made up of ridges and hollows. You can see or feel these uneven places in a rough surface. But in a smooth surface the ridges and hollows may be so tiny that you can see them only with a microscope. No matter how smooth a surface seems to be, it is never perfectly even. So there is always some friction when one surface is moved over another. The ridges on one surface are forced against the ridges on the other surface and caught in its hollows. There is more friction between rough surfaces, because their ridges and hollows are larger than those in smooth surfaces. 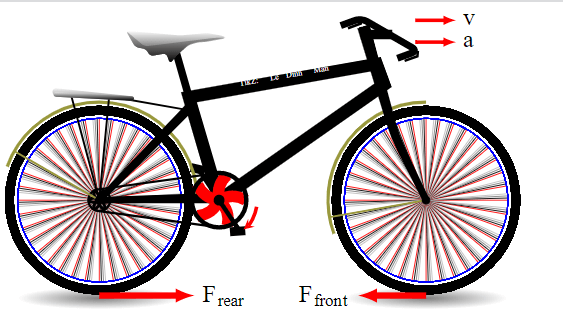 If you push a book across a table, there is friction between the top of the table and the cover of the book. To move the book, you must push harder than the opposing force caused by friction pushes back. Because of friction, one surface always resists being moved over another. Enough force must be exerted to overcome the resistance of friction between the surfaces. Energy is used to exert the force and move the object. But we do not want to do any more work than is needed. So we usually try to keep friction as small as we can.

One way to reduce friction is to make surfaces that rub against each other very smooth. Another way is to put a slippery material, such as oil or grease, between the surfaces to keep them from touching. Still another way is to use wheels, rollers, or balls so that one surface rolls over the other instead of sliding over it. Parts with hard, smooth surfaces are used in wrist watches, oil is used in automobile engines, and ball bearings are used in roller skates. To reduce friction as much as possible, all three ways of reducing friction are often used. Even so, there is always some friction left. Energy must be used to exert a force that overcomes this resistance.