What are the Nucleoproteins? What is the function of nucleoproteins, the importance and where they are found in the body?

Nucleoproteins; are chemical complexes made up of nucleic acid and protein. These two substances are apparently not linked by strong chemical bonds, but are held together by salt linkages and other weak bonds. Most viruses consist entirely of nucleoproteins, although some of the larger viruses also contain fatty substances. Nucleoproteins also occur in animal and plant cells and in bacteria. Nucleic acids were so named because originally it was believed that they occurred only in cell nuclei. One type, deoxyribonucleic acid ( DNA), is found almost entirely in the nucleus (in the chromosomes ). The other, ribonucleic acid (RNA), occurs in both nucleus and cytoplasm.

DNA, several kinds of RNA, small soluble proteins called histones, and various enzymes have been isolated from cell nuclei. The DNA and histones, and a trace of RNA, can be extracted together as a nucleopro-tein called nucleohistone. DNA contains the hereditary units, or genes. The function of the histones is not known. Nuclei also contain insoluble structural proteins. Exacdy how all these substances are combined in the nucleus of the living cell is uncertain. In nondividing cells the chromosomes are present in forms that cannot readily be distinguished on microscopic examination, but they probably contain structural protein, DNA, histones, an enzyme for making RNA, and some newly formed RNA. 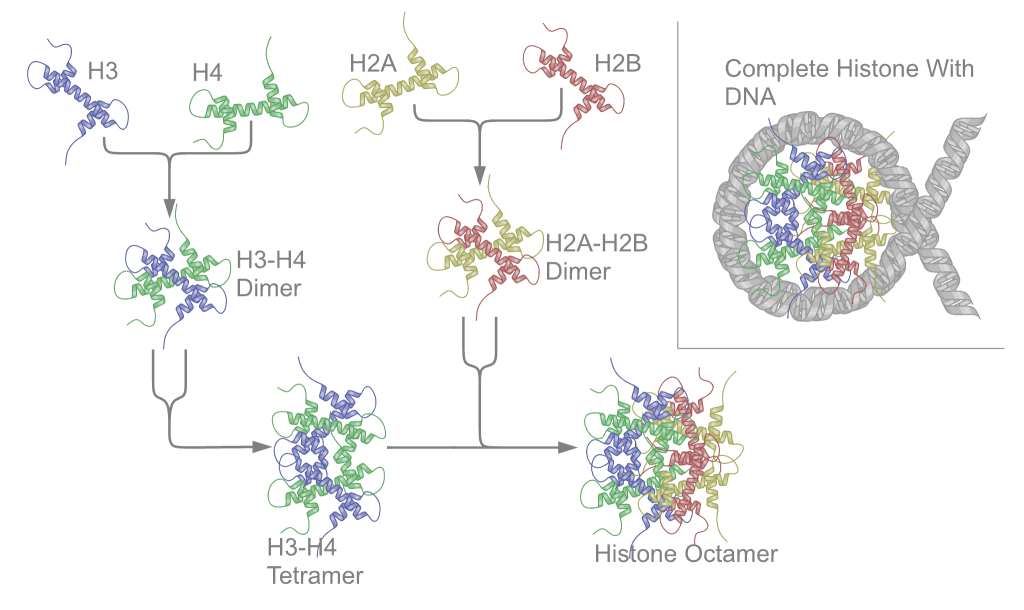 A nucleosome is a combination of DNA + histone proteins. (Source : wikipedia.org)

In cells that are about to divide, an enzyme for making DNA is also present, and the amount of DNA doubles. The chromosomes condense into microscopically visible structures that can be shown to contain both DNA and protein. Sperm cells, which have only half as many chromosomes as other cells, contain half as much DNA, and a simpler protein, protamine, instead of histone. Much of the nuclear RNA is in a smaller structure, the nucleolus.

Some of the nuclear and nucleolar RNA occur in the form of ribosomes, which resemble the ribosomes in the cytoplasm. Animal ribosomes are ribonucleoproteins that consist of about equal amounts of RNA and protein. Their mass is about 4 million times that of a hydrogen atom. In electron microscope pictures of thin sections of dried cells, the ribosomes appear as dense, round bodies less than a millionth of an inch in diameter. In living- cells, however, they are probably loose, jellylike -structures about twice this size, containing large amounts of water. Ribosomes are composed of nucleoprotein subunits, usually one third and two thirds of the total mass, which are joined together by magnesium. Each subunit contains many small protein chains, closely intertwined with the RNA.

Ribosomes are the sites where amino acids are joined together to make proteins. The exact order in which each of the 20 kinds of amino acids is joined to the preceding one in the chain, to form a particular protein such as hemoglobin, depends on a code contained in a portion of the RNA. This RNA, called messenger RNA, is synthesized in the nucleus on a DNA template. It carries the information of one particular gene to the ribosome.

In electron micrographs many ribosomes appear to be free in the cytoplasm, particularly in rapidly growing tissues. Others are associated with membranous structures called endoplasmic reticulum. Cells that synthesize proteins for export—such as liver cells that make plasma proteins or pancreas cells that make digestive en-zymes—contain large amounts of endoplasmic reticulum heavily studded with ribosomes. These membranes may represent a system of canals that convey the protein newly synthesized in the ribosomes out to the surface of the cell. 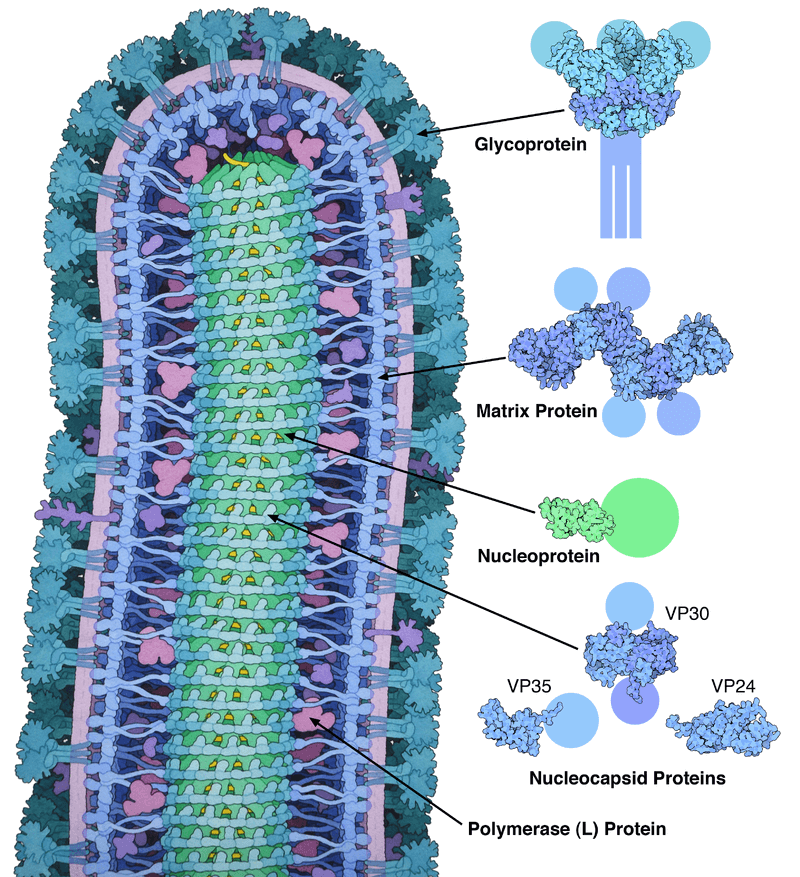 Cross-sectional drawing of the Ebola virus particle, with structures of the major proteins shown and labelled on the right (Source : wikipedia.org)

The nucleoproteins of plant cells are similar to those of animal cells. Plant chromosomes resemble animal chromosomes in many ways, and the cytoplasm of plants contains ribosomes very much like those of animal cells. Bacteria possess a chromosomal apparatus similar to that of animal and plant cells but do not appear to have a well-defined nucleus. Their ribosomes are nucleoproteins that contain the same amount of RNA as those of animal and plant cells but less protein, so that their mass is about 2.8 million times that of a hydrogen atom. At least a part of the template RNA associated with them is unstable, and is constantly being replaced by RNA that has been freshly synthesized on the genes. The rapid renewal of part of their RNA enables bacteria to adapt quickly to changes in their environment by changing the kind and amounts of the enzymes they synthesize.

Viruses are nucleoproteins that consist of DNA or RNA surrounded by a protective shell of protein. The nucleic acid carries the genetic information that is needed for the synthesis of new viral nucleic acid, of a new shell of protein, and of new enzymes needed for viral reproduction in the host cell. In the simpler viruses the shell is made up of repeating sub-units of one kind of protein. The shell’s only known function is to protect the nucleic acid. Some of the large bacteriophages have an elaborate protein structure, with a “head” containing DNA and a “tail” that attaches to the cell surface. The protein then contracts, injecting the DNA into the cell. DNA viruses also include animal viruses, such as vaccinia (cowpox). RNA viruses include small bacteriophages (viruses that attack bacteria), animal viruses such as poliomyelitis, and many plant viruses.