Information on the Greek God Apollo, myth, story and facts. The role of Apollo in the Greek Mythology. 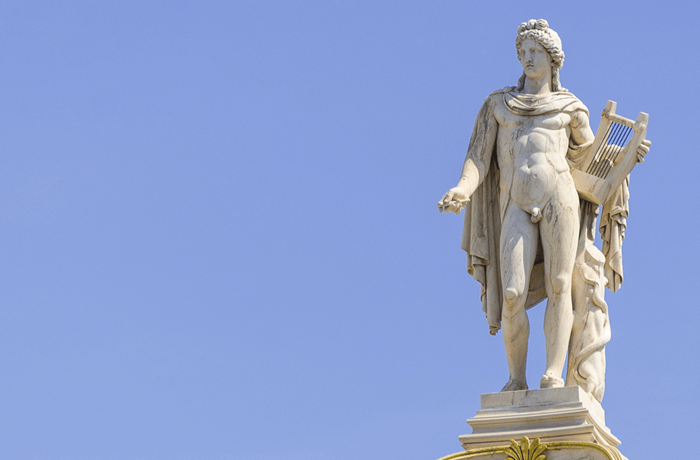 Apollo; Twin brother of Artemis, the virgin huntress, and son of Zeus and Leto Titaness. Called by the Greeks Phoebus ‘shining’. Cultic associations with Asia Minor predate those of Greece: Leto was said to have given birth to Apollo and Artemis in Lycia, though the place most closely associated with Apollo’s birth was the sacred island of Delos. At birth he said: ‘Dear to me shall be the lyre and bow, and in oracles I shall reveal to men the inexorable will of Zeus.’

According to one legend, the young Apollo went to Delphi at the age 0( four days in order to slay there the earth serpent which had tried to molest his mother during pregnancy. This python, a son of Gaia, sent Up revelations through a fissure in the rock; a priestess, the Pythia, inhaling the potent fumes, was thus inspired to give voice to cryptic utterances _the prophecies of the Delphic Oracle. Apollo killed the great snake and took its place. Another legend makes the dispossessed creature a she dragon named Delphyne, ‘the womb-like’: hence Delphi.

Of his amorous adventures, noteworthy were the affairs with Koronis the mother of the medicine god Asclepius; with Daphne, a wild virgin from Thessaly, who became a laurel to avoid ravishment; with the nymph Dryope, whom he approached in the guise of a tortoise; with the boy Kyparissos, ‘cypress’, a kind of double of Apollo himself. Daphne and Kyparissos must derive from the god’s older habitat, the wild regions of the north. Apollo was originally the patron of shepherds: after his installation at Delphi he acquired power over archery, music, and medicine. The Romans built their first temple to Apollo in 432 bc. They may have adopted him from Greek settlers or from the Etruscans, whose divinity Veiovis was identified with Apollo.