ACANTHOCEPHALA, is a phylum of spiny-headed worms that live as parasites in the intestines of vertebrates.

There are over 500 species found throughout the world. They have a high reproductive capacity and infect the host intestines in large numbers. 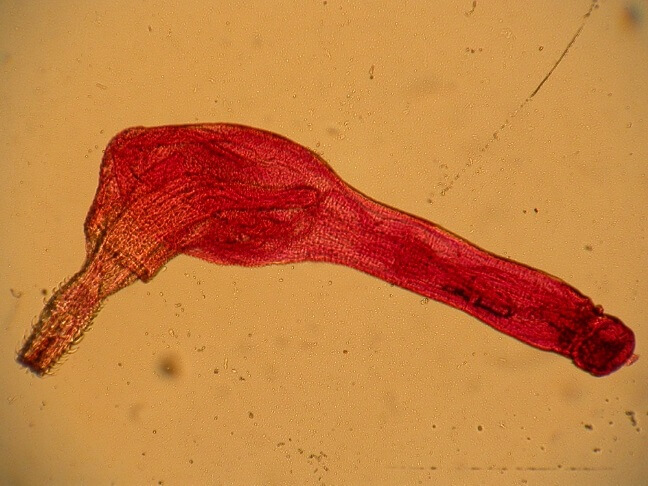 Acanthocephala has been classified only recently as a separate phylum. Although the worms’ bodies appear flattened while they are in the host intestines, they become cylindrical when placed in water. Thus some scientists grouped these worms under phylum Nemathelminthes (round worms); others grouped them in phylum Platyhelminthes (flat worms). However, distinctive features of their anatomy and life cycle warranted their placement in a separate phylum.

Acanthocephalans range in size from less than an inch to 15 inches. The larger species are found in mammals. Although naturally translucent or white, the worms usually are colored by the intestinal matter of their hosts. Some of the species appear to have segmented bodies, but the segments involve only the surface structures of the worm. Spines are found on the body trunk of some species. The sexes are separate. 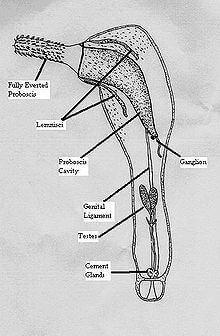 Like most parasitic worms, acanthocephalans have overdeveloped reproductive systems, and the reproductive .organs are conspicuous. There is no digestive system, and nourishment is absorbed directly through the body wall. A modified excretory system of specialized cells, called flame bulbs, exists in some species. The nervous system is rudimentary, with a small group of nerve cells serving as the brain; there are no well-developed sense organs.

The eggs of the species are ejected by the female into the intestinal tract of the host, and they then are passed out of the host’s body. An intermediate host—usually an arthropod—in-gests the eggs. The eggs hatch in the body of the intermediate host and begin to develop into infectious larvae. The arthropod containing the larvae then is ingested by another vertebrate host. The worms free themselves, attach them-selves to the walls of the vertebrate’s intestines, and grow to sexual maturity. They then repeat the cycle.