What is Grass snake? Information and facts about grass snakes. What is theis habitat, their diet and more.

The grass snake, which is common throughout England, Scotland and Wales, is quite harmless and soon becomes tame and will take food from the hand. It usually has black markings on the back and sides, on a background of greyish-green, olive green or brown. There is almost always a noticeable whitish-yellow or orange “collar” immediately behind the head, and it is bordered, or sometimes divided, by two black patches. Because of this collar the grass snake is sometimes called the ringed snake, but large females are sometimes found in Britain without the collar. Usually grass snakes are about three feet six inches long, but female grass snakes five feet in length have been found in Wales. 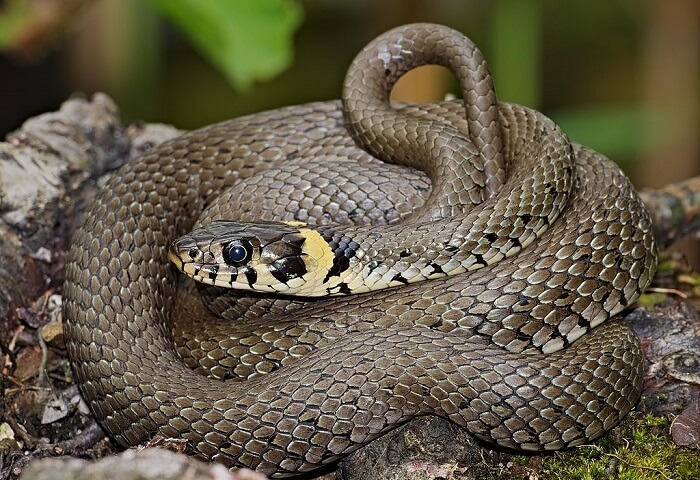 Grass snakes eat frogs, toads, newts and fish and are generally found near water. They are excellent swimmers and divers. They sometimes eat young birds, and tame grass snakes have been known to eat dead mice.

Grass snake eggs, which are usually laid in July and August, are an inch long, and covered with a white, parchment-like skin and stuck together in clumps. They are often laid in manure, compost or sawdust heaps, as these are hot. After laying her eggs, the female snake leaves them and when the young snakes hatch they are able to look after themselves.

The grass snake found in Britain also lives in Europe and in parts of Asia and North Africa. Most countries have their own particular kinds of grass snakes, which are usually small, green and harmless. They are called grass snakes either because of their green colour or because they live in grassy country.