Balder; ‘The bleeding god’ of Germanic mythology. Renowned for his good looks and his wisdom, Odin’s second son was a northern derivative of Adonis, Attis, Tummuz, and Osiris. The return of the dying Balder would occur in the new world, the green land risen from the sea, after ragnarok, the destruction of the gods. 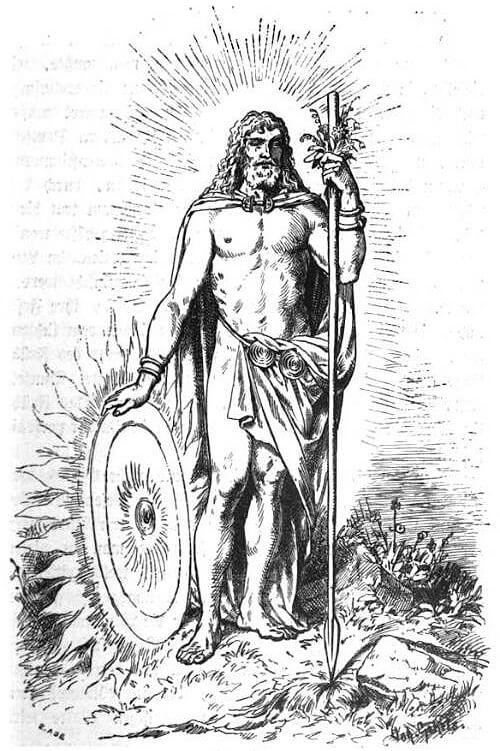 Balder was killed by a shaft of mistletoe, since time immemorial in Europe a mysterious and sacred plant. Hodr was the blind god who, used as a catspaw by Loki, flung the deadly shaft. When Balder fell, the gods were thrown into confusion and uncertainty, till Frigg suggested that someone ride to hel, the place of death, in order to find out the ransom desired. This clark abode was really a prison, filled with the souls who would fight against the gods at ragnarok.

Its queen Hel possessed a palace called Sleetcold, and she tyrannized those who were sent to her, having died of disease, old age, or accident, instead of meeting a glorious end in battle. Balder was known as the ‘god of tears’ because his brother Hermodr rode back on Sleipnir, the eight-legged stallion of Odin, with news that the condition of release from hel was that all created things should weep for him—as they did, all except Loki, whom the gods bound for this impudence. But the German peoples always believed one day, after the cosmic cataclysm, the un-dead Balder would return to a rejuvenated world. In the event the dying-and-rising son of the Christian deity took over his place in the hearts of northern men.