CONCESSION, in international law, means the act of granting or the thing granted. In diplomatic negotiations each party concedes advantages within its control to the other until agreement is reached. 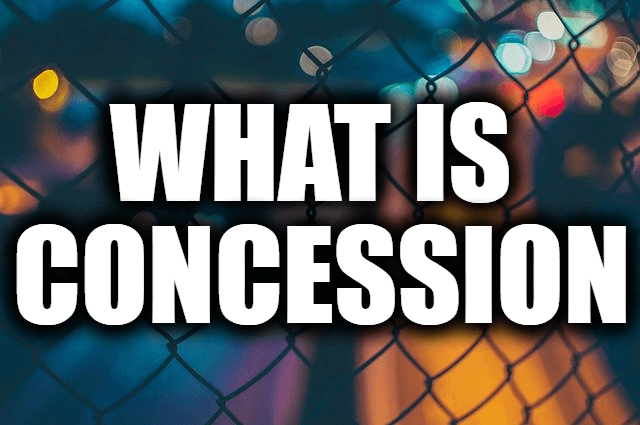 A government makes a political concession when it grants political rights in its territory to a foreign government. It makes an economic concession when it gives a grant, franchise, license, patent, charter, or monopoly for use of land, exploitation of resources, on conduct of an enterprise within its territory to one of its own nationals or corporations, or to a foreign individual, corporation, or state.

A concession has the character of a contract. Its terms are established in a formal instrument usually involving burdens as well as advantages to the concessionaire. Concessions have generally been given for a term of years but may be perpetual. They usually concern matters deemed to be of public interest by the law of the conceding state but may involve only private interests.

Under the feudal system in the Middle Ages, concessions for use of land or establishment of municipal corporations were given by the crown in European countries. Early in the I7th century, Lord Coke, an English jurist, remarked that the great English estates “were nothing but concessions of the crown.” In the 17th and 18th centuries, chartered companies such as the British and Dutch East India companies and the Virginia, Massachusetts, and Hudson’s Bay companies and proprietors such as William Penn and Lord Baltimore were given concessions by the crown to operate with governmental powers in colonial areas. In the 19th and 20th centuries, underdeveloped countries have given concessions to foreign governments and corporations for canal construction, naval bases, residential areas, railroad building, public utility development, agricultural development, mining, oil extraction, and many other purposes.

Economic concessions have contributed to the development of underdeveloped countries by providing public utilities, such as railroads, lighthouses, airports, and hospitals, and by leading to the discovery and development of natural resources. Such concessions usually give the conceding state at least 50% of the profits and include provisions concerning duration, the law applicable, and arbitration of disputes. Since World War II, however, the conceding governments, especially in Asia and Africa, have shown increasing dissatisfaction with these concessions. The underdeveloped countries, on achieving independence, have tended to identify concessions with exploitation and imperialism. They often have demanded renegotiation to obtain more favorable terms or have nationalized the concessions by exercising the right of eminent domain.

A United Nations commission established in 1958 suggested that nationalization, expropriation, and requisition of foreign concessions may be justified on grounds of public utility, ‘security, and national interest, but that appropriate compensation should be paid. In 1966 the UN General Assembly approved two covenants of human rights, each of which provided for the right of self-determination for all peoples and of permanent sovereignty of peoples and nations over their natural wealth and resources.