George Bancroft; (1800-1891), American historian and diplomat. He was born in Worcester, Mass., on Oct. 3, 1800. A precocious youngster, he graduated from Harvard in his 17th year. He went to Gottingen, Germany, for further study, taking a Ph.D. there in 1820. Two years later he returned to teach Greek at Harvard.

German example had suggested to him improvements in pedagogy, and Bancroft sought to reform teaching at Harvard. Disappointed at the opposition to his ideas, he joined Joseph G. Cogswell in opening a high school modeled on the German Gymnasium. Their Round Hill School at Northhampton, Mass., was a notable educational experiment during its 11 years (1823-1834). Bancroft pioneered in bringing German culture to the attention of Americans. 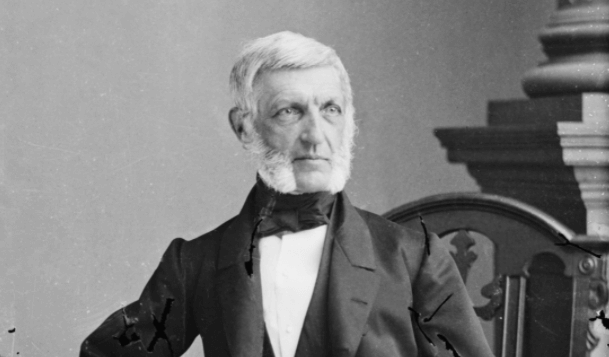 Bancroft had become interested in politics, and he soon emerged as a spokesman for the Jacksonian Democrats. His service in this role won him an appointment as collector of the Port of Boston in 1837. Eight years later President Polk named him secretary of the navy, in which capacity he established the Naval Academy at Annapolis.

Bancroft next was sent as minister to England (1846-1849), where he accumulated a large collection of historical materials. As a Northern Democrat, with little influence in a party now dominated by Southerners, he was inactive politically for many years. In this interval Bancroft worked on his history and, during the Civil War, made speeches in behalf of the North.

In 1867, President Andrew Johnson named Bancroft minister to Berlin, where he remained for seven years. He had already gained international fame as a historian, and Bismarck’s friendship gave him special distinction in Germany. When he returned to his native land, Bancroft was acclaimed the Nestor of American historians. His life spanned most of the century, ending in Washington, D.C., on Jan. 17, 1891.

Bancroft’s theme was that “the spirit of the colonies demanded freedom from the beginning.” To support this thesis he distorted the relationship of the colonies to the mother country. He argued that the colonists were always right in their disputes with king and Parliament. Written in a time when nationalism was rife in the Western world, his history reflected the intense American nationalism of the 19th century.

Bancroft’s work appeared at the precise moment when Americans craved a history to celebrate their great epic—the discovery and settlement of a new world and the creation of a new nation. Bancroft’s history far surpassed all others in coverage and narrative power. His volumes quickly became the standard history of the United States, and their large sales made him wealthy. He wrote as a philosophic historian, with literary artistry and with a belief in progress. He celebrated the victory of liberty-loving peoples over authoritarianism. History, he felt, should instruct and entertain. God was manifest in the unfolding of history. The United States represented the goal to which all civilization should aspire.

Eventually, Bancroft’s volumes came under severe criticism from the new school of “scientific historians.” They criticized his excessive nationalism, his lack of objectivity, and his failure to see the complexity of issues. They also pointed out that his history was almost entirely a political and military narrative.

These criticisms were largely valid, yet Bancroft’s work had great virtues. It brought American history out of its provincial setting into the world arena. He levied upon sources in Europe as well as in America. Though mistaken about the place of the colonies in the British empire, he communicated the fervor of Americans in the days when revolution swept the land. Often called the “Father of American History,” he set a standard by which later historians measured their own achievements. As one historian expressed it, he could see farther “because he stood on Bancroft’s shoulders.”