Apologia Pro Vita Sua;is an autobiographical work by John Henry, later Cardinal, Newman, published in 1864. Literally the title means “A Defense of His Life.” The work is best characterized by its subtitle, Being a History of His Religious Opinions.

In the years following his conversion to the Roman Catholic Church in 1845, Newman’s great reputation had undergone various changes, and at the end of 1863 he was living, not in retirement or inactivity, but, as he put it, “out of the world,” and not “in active controversy with the Anglican body, or any portion of it.” It was then that an anonymous correspondent called his attention to an attack upon him in Macmillan’s Magazine of January 1864. The attack was part of a book review, signed “C.K.,” in which it was stated: “Truth, for its own sake, had never been a virtue with the Roman clergy. Father Newman informs us that it need not, and on the whole ought not to be.” 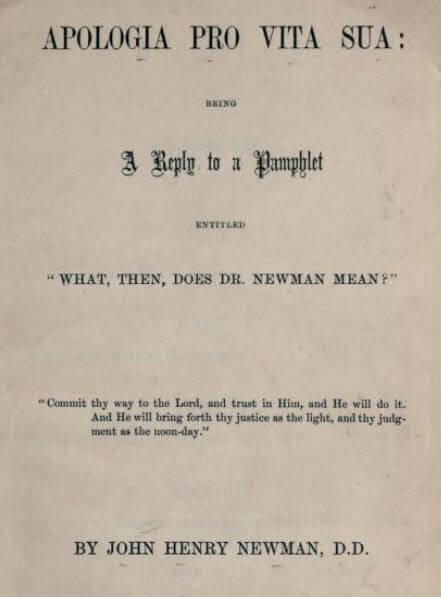 Not knowing who the author was, Newman wrote to Macmillan & Co., calling their attention to this “grave and gratuitous slander,” but not asking for an answer or apology. The publishers referred his letter to the author of the review, Charles Kingsley, the^ popular clergyman and novelist, who informed Newman that the basis for the charge was a sermon entitled Wisdom and Innocence. In answer Newman showed that the sermon contained nothing to substantiate the charge, and that it had been preached and published while he was still a Protestant. In the ensuing correspondence Kingsley’s position became increasingly difficult and untenable as he added mistake after mistake to the original error. Few passages in literature contain finer or more justified satire than Newman’s analysis of Kingsley’s attitude, reasoning, and methods of debate.

This incident led to the writing of the Apologia proper. The complete work was written over a period of about 10 weeks and consisted of seven parts, published as pamphlets on consecutive Thursdays between April 21 and June 2, 1864, together with an appendix, issued on June 16. When he put these pamphlets into book form, Newman condensed the controversy between himself and Kingsley into a preface and added notes and other supplementary matter.

The body of the book consists of five chapters, the first giving the history of his religious opinions up to 1833, the next three his account of the changes that took place between 1833 and 1845, and the last describing the position of his mind since 1845. Newman tells how he “was brought up from a child to take great delight in reading the Bible,” and was subjected to various religious influences in his childhood, youth, and years at Oxford. However, the movement of his thought was consistently in the direction of traditional Anglican doctrine. He describes his voyage to the Mediterranean in 1832-1833 and his return to England, where he had “a work to do,” although he did not then know that it was to be the Oxford, or Tractarian, movement, which was to have such momentous consequences.

Events of that great activity are described in chapters 2 and 3. “From the end of 1841,” Newman writes, “I was on my death-bed as regards my membership with the Anglican Church, though at the time I became aware of it only by degrees.” During the next four years he moved gradually closer to the Roman Catholic Church, into which he was received on Oct. 9, 1845. Since that date, he writes, “I have had no variations to record, and have had no anxiety of heart whatever. I have been in perfect peace and contentment; I have never had one doubt. … it was like coming into port after a rough sea; and my happiness on that score remains to this day without interruption.”

The Apologia pro Vita Sua was recognized as a masterpiece of spiritual and intellectual self-analysis and self-revelation upon its first appearance, and that verdict has never been challenged. Although written with the utmost clarity, it is not an easy book for the ordinary reader. The subject matter requires a knowledge of theology and an appreciation of the profound issues involved. Such knowledge and appreciation were possessed more widely by the educated public in Victorian England than by the educated public today. Yet the Apologia remains a unique work in English, and world, literature and an indispensable document for understanding Newman and the period in which he lived.