François Duvalier; (1907-1971), president of Haiti. He was born in Port-au-Prince, Haiti, on April 14, 1907, of middle-class Negro parents. In 1934 he graduated from medical school and for a decade practiced medicine.

Despite his marriage into a mulatto family, he became identified as a champion of the underprivileged blacks in their struggle against the mulatto elite. He joined forces with political leader Dumarsais Estimé, who espoused the black cause. After Estimé became president in 1946, he appointed Duvalier successively director general of public health, assistant secretary of labor, and finally secretary of labor. Estimé was ousted, however, in 1950 by Paul Magloire, commander of the Haitian guard, and Duvalier left office. 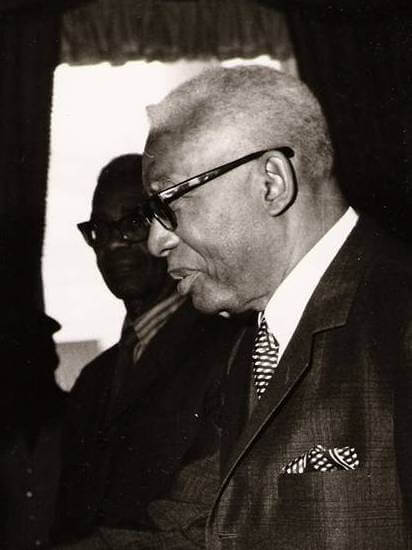 When Magloire was forced from office in 1956, Duvalier emerged as a presidential candidate. Handling himself astutely during the chaotic first half of 1957, he gained an overwhelming majority in the September elections and was inaugurated on Oct. 22, 1957.

Although it could not be expected that Haiti would move rapidly toward model democracy, most observers expected Duvalier, in keeping with his past career, to institute social and economic programs to aid the lower classes. On the contrary, his regime was corruption-ridden, terroristic, and authoritarian to an extreme degree. In 1964 he drew up a new constitution, establishing a lifetime presidency for himself.

His championing of the blacks led only to the suppression of the mulattoes. His failure to curb the bribery of his officials led to the cancellation of U. S. economic aid programs, and the institution of a personal and brutal secret police force, the Ton-Ton-Macoute, discouraged political opposition and disastrously affected the tourist trade. Haiti’s gross national product, the lowest in all Latin America, declined further during Duvalier’s regime, which ended with his death in Port-au-Prince on April 21, 1971. He was succeeded by his 19-year-old son, Jean-Claude.