What are the beneficial and harmful types of butterflies and moths. Info on relationships with plants and other animals, ecological importance. 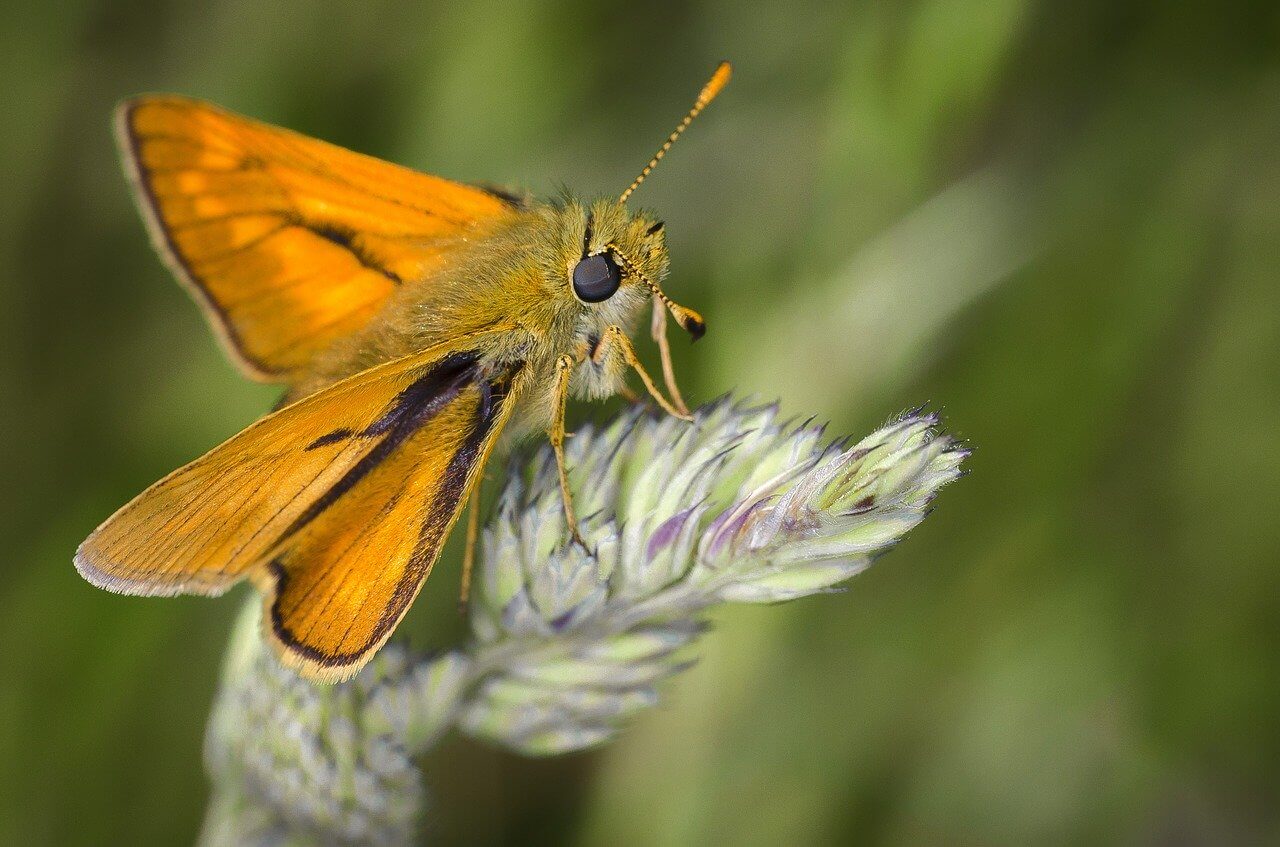 Relatively few butterflies and moths are definitely beneficial to man. One species, the silkworm (Bombyx mori), is the source of nearly all silk. A few other species have been used in weed control; the South American cactus moth (Cactoblastis cactorum) was the chief agent in reclaiming millions of acres of Australian agricultural and grazing land overgrown by spiny cacti. Many species of butterflies and moths carry on unrecognized weed control, and flower-visiting adults accomplish much useful pollination. The gypsy, cecropia, and European peppered moths are valuable in research in genetics, physiology, and evolution.

The general ecological effect of the lepidopterans on land plants and animals is enormous and all-pervasive. Nearly all caterpillars feed on plants and consume an enormous mass. In turn, lepidopterans serve as food for tens of thousands of species of other animals that prey upon them. Their sudden disappearance would cause an almost unimaginable disruption of land life.

The seed plants (Spermatophyta) are the chief source of food for caterpillars, although some ferns, liverworts, and mosses are eaten. The great majority of caterpillars eat foliage, but some families (such as Cossidae and Aegeriidae) are wood and root-stock borers, and many small species bore in the stems of grass and other herbaceous plants. Others bore into fruits or eat seeds or flowers. A few caterpillars cause the formation of galls, in which they live, and many feed on dead leaves on the forest floor. In several families of very small moths (such as Nepticulidae and Gracil-lariidae) the tiny larvae tunnel within leaves or under bark; small larvae often skeletonize leaves. A few moths are carriers of plant diseases.

Many flowering plants benefit from pollination by adult butterflies and moths; a few such plants—some orchids and morning glories—are dependent upon specific hawk moths (Sphingi-dae) for pollination. The abundant excretions of caterpillars contribute greatly to soil fertility and especially benefit smaller plants growing under the larger ones on which the caterpillars are feeding. On the whole, however, lepidopterans harm plants more than they benefit them.

A few cases of obligatory mutualism (Symbiosis) with plants are known. Females of the yucca moths (Tegeticula) carry balls of pollen to the stigmata (female organs) of yucca flowers. They also lay their eggs in the yucca seed capsules. Thus pollinated, the plants form fruits in which the moth larvae feed. 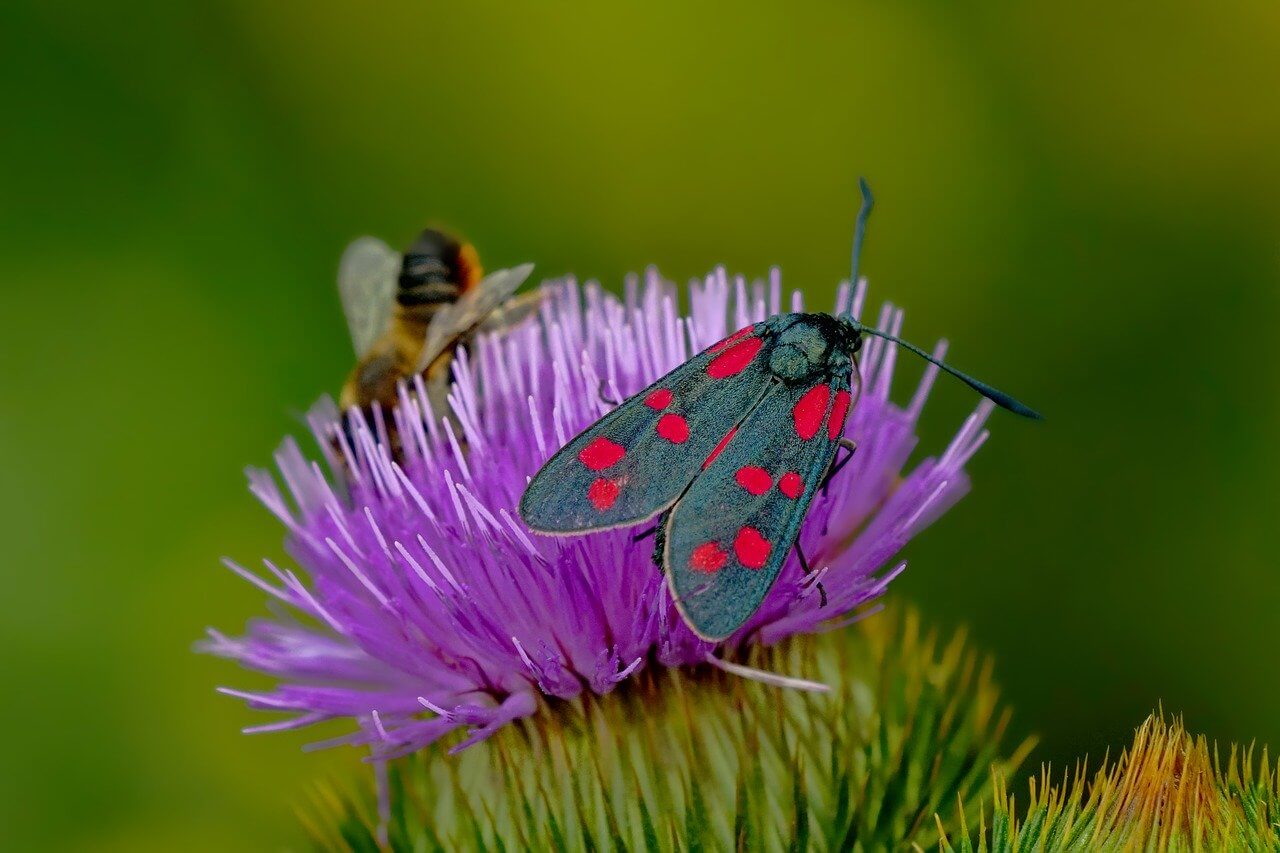 Relationships with Other Animals.

In all of their life stages lepidopterans are preyed upon by a vast host of other animals. Among the most important of these are centipedes, spiders, and many groups of insects from praying mantids to social wasps. Among vertebrates are frogs, toads and lizards, insectivorous birds, small rodents, bats, and monkeys. Most of these are direct predators which locate their prey chiefly by sight, then seize and overpower it. A few groups of insects, such as the tachina flies (Tachinidae) and many wasp families (Ichneumonoidea, Chal-cidoidea, and some Cynipoidea), are parasitoid predators. Females of these insects locate the prey, chiefly by scent, and then lay eggs on or in them. Their larvae then develop slowly within the living hosts like true parasites, and eventually kill the host. Such parasitoids kill far more lepidopterans than the direct predators do.

Lepidopterans are the hosts of very few true parasites. The chief ones are mites (for example, Myrmonyssus) that live in the tympanic cavities of noctuid moths and destroy their auditory structures.

Few lepidopterans feed on other animals or animal substances. A few live on the secretions of other insects, and some scavenge in bee, bird, and mammal nests. A few are predatory on scale insects or cannibalistic on other caterpillars. A few lycaenid butterfly larvae have sweet, honey-dew secretions that ants relish greatly. The ants often attend these larvae and may take them into their nests, where the larvae sometimes eat the ant brood.

The Lepidoptera could never have evolved into the enormous and successful group that they are without efficient defenses against the great variety of predators that attack them. Their first line of defense is a high reproductive rate—50 to 1,000 eggs laid by each female. In addition they have evolved a multitude of special means of protection.

Chemical defenses are many and varied. Many larvae secrete bad-tasting, repellent, or toxic substances such as acids (squirted from gland openings), alkaloids, or even hydrogen cyanide (in the blood). Many moth larvae (for example Notodontidae, Arctiidae, Zygaenidae) and butterfly larvae (such as Danainae, Heli-coniinae, some Papilionidae) are noted for such secretions. Still others (Eucleidae, Megalopygidae) have sharp, hollow hairs that cause painful skin rashes. The larval secretions commonly carry over into the pupa and adult. Most of the protected species are very distinctive in appearance and are easily recognized by their bright colors and bold patterns; they also have characteristic poses or actions. Such aposematic appearances-signals of inedibility or toxicity—are easily learned and long remembered by predators after only one or two painful experiences, and are thus very efficient visual defenses.

Following the evolution of these protections-chemical and aposematic—came the evolution of the two main types of mimicry for which the Lepidoptera are especially noted. These are Miillerian mimicry and Batesian mimicry. In Miillerian mimicry, protected species mimic each others’ appearance and thus simplify the recognition and learning of their inedibility by predators. In Batesian mimicry, unprotected species mimic protected ones and thus gain some immunity from deceived predators.

Most caterpillars that feed in the open and adult moths that rest in exposed places during the day are cryptic in coloration and often also in form; they resemble a background of natural objects such as grass, bark, leaves, twigs, or bird droppings. In this way they may escape detection by predators.

Many other adults and caterpillars have disruptive appearances due to bold, contrasting markings that seemingly break their body outlines into two or more unrelated objects. Leaf-green larvae may thus have white or brown areas resembling holes or dead patches.

The underwing moths (Catocala) combine cryptic, barklike fore wings with brilliant red, orange or white, and black hind wings. Such flash coloration is very effective because the sudden exposure of the hind wings startles an approaching predator and delays it long enough to let the moth escape. Prominent eyespots on the hind wings have a similar startling effect when suddenly exposed.

Nest camouflage is another form of protection. A great many caterpillars live in solitary nests made with silk or rolled or folded leaves. Others, such as the bagworms (Psychidae), make portable silk cases masked with leaves or twigs; they live and pupate in these. Many cocoons, too, are camouflaged with various substances. A few caterpillars (Geometridae) mask themselves with attached bits of leaf or petal.

The tiger moths (Arctiidae) and some relatives have an unusual form of defense. They make very high-pitched noises in the ultrasonic range of bats’ flight-orientation apparatus; this seems to interfere with the bats’ sonar. These and many other moths can hear the bats’ “supersonic” signals, enabling them to evade a bat’s attack.