Hyphae are filamentous cylindrical structures that constitute the body of multicellular fungi. They are made up of a row of elongated cells surrounded by a chitinous cell wall. The cells that compose it may or may not be separated from each other by a transverse cell wall (septum).

The mycelia of filamentous fungi consist of interconnected hyphae that grow at their apexes and branch subapically. Apical growth can reach speeds greater than 1 µm/s. Hyphae possess multiple functions associated with growth, nutrition, and reproduction. According to some authors, the success of fungi to colonize terrestrial ecosystems is due to their ability to form hyphae and mycelia. 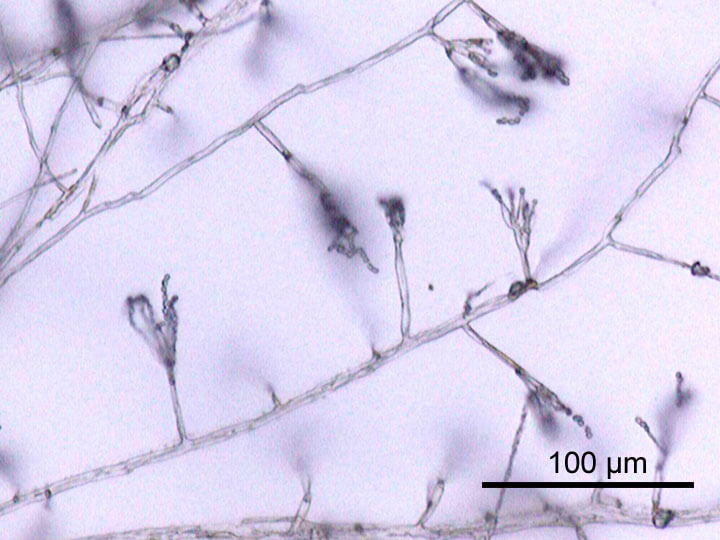 Characteristics and structure of hyphae

– The hyphae generally have a tubular or fusiform shape, they can be simple or branched. If they are septate, the septum has a central pore of 50-500 nm that allows inter-compartmental and interhyphal cytoplasmic mixing.

– They may or may not develop connections in clamps, or fibulae, between adjacent cells of the same hypha. The cell walls are chitinous in nature, of varying thickness, which may be embedded in a matrix of mucilage or gelatinized materials.

– They can be multinucleated (cenocytic) or formed by uni, bi, poly or anucleated cells. Hyphae with binucleate cells may arise by fusion of hyphae from uninucleate cells (dicaryon) or by migration of nuclei between neighboring cells through the central pore. Due to the latter cause, cells can also be polynucleated or lack a nucleus.

– The growth of the hyphae is apical. The distal area of ​​the hypha, called the apical body (Spitzenkörper), is spherical in shape, it is not separated from the rest of the hypha by a membrane, however, it functions as an organelle.

– The apical body is formed by vesicles, microtubules, microfilaments and microvesicles. The latter come mainly from the Golgi apparatus. This set of structures forms a very dense and dark area. The apical body is involved in the synthesis of the cell wall.

The modular pattern of organization of the hyphae contributes to their differentiation. In these, the apical cells are generally involved in the acquisition of nutrients and have sensitive capacity for the detection of the local environment. The sub-apical cells are responsible for generating new hyphae through lateral branches. The resulting network of hyphae is called mycelium.

Hyphal branching appears to have two general functions. On the one hand, it serves to increase the surface of the colony, which helps the fungus to increase the assimilation of nutrients. On the other hand, the lateral branches participate in hyphal fusion events, which seem to be important in the exchange of nutrients and signals between different hyphae in the same colony.

In general, hyphae are associated with many different functions, depending on the specific requirements of each fungal species. Among these functions are:

Parasitic fungi have specialized structures at the ends of their hyphae, called haustoria. These structures penetrate the host tissue, but not its cell membrane. Haustoria act by releasing enzymes that break down the cell wall and allow movement of organic matter from the host to the fungus.

Arbuscular mycorrhizal fungi, for their part, form structures called arbuscules and vesicles at the ends of the hyphae inside the cortical cells of the host plants .

These structures, which are used by fungi for nutrient uptake, act as a complement to the plant root in nutrient uptake, especially phosphorus. They also increase host tolerance to abiotic stress conditions, and molecular nitrogen fixation. Saprophytic fungi have structures called rhizoids for the absorption of nutrients, which are equivalent to the roots of higher plants.

Several species of fungi exhibit hyphae composed of structures called mycelial cords. These ropes of mycelium are used by fungi to transport nutrients over long distances.

At least 150 species of fungi have been described as predators of nematodes. To capture their prey, these fungi developed different types of structures in their hyphae. These structures act as passive (adhesive) or active traps. Passive traps include buttons, branches, and sticky webs. Among the active traps are the constrictor rings.

Generative hyphae can develop reproductive structures. Additionally, some haploid hyphae can fuse in pairs to form haploid binucleate hyphae, called dikaryotes, these nuclei will then karyogamy to become diploid nuclei.

according to cell division

According to its cell wall and its general shape

The hyphae that form the fruiting bodies can be identified as generative, skeletal, or union hyphae.