In Bulgaria, Christmas is celebrated on December 25.

Many Eastern European countries celebrate Christmas on January 7, since most Orthodox churches use the old Julian calendar, but the Bulgarian Orthodox Church uses the Gregorian calendar, so Christmas begins on December 25.

For many Bulgarians, the preparations for Christmas begin with Advent, which lasts 40 days in the Orthodox Church and begins on November 15. 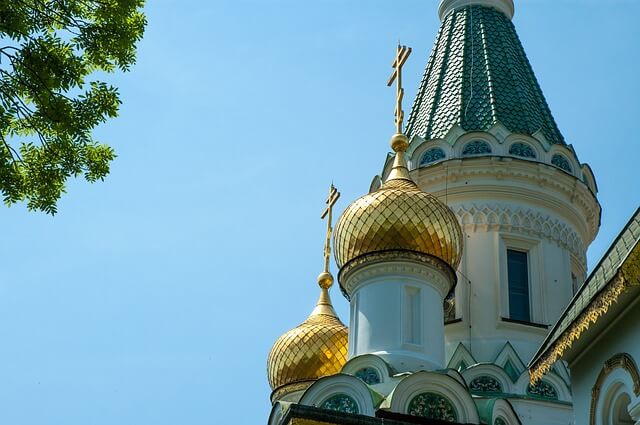 A legend in Bulgaria is that Mary began her work in ‘Ignazhden’, on December 20 (Saint Ignatius of Antioch) and gave birth on Christmas Eve, but the birth of Jesus was not announced until Christmas Day. The 20th is also the traditional ‘new year’ in Bulgarian culture. It is traditional to eat a special ring-shaped ring called “kolaks” on this day.

The straw is often put under the tablecloth, and you could even bring a wooden plow to the house and put it behind the door! These are meant to help you have good harvests during the next year.

There is a special loaf of bread, round and decorated, called “pita”, which has a baked coin. If you find the good, you are destined to have good luck for next year! The bread is usually cut by the oldest person in the food and delivered around the table.

It is usually a rich vegetarian meal and includes dishes made of different like bean soup, ‘sarmi’ cabbage leaves stuffed with rice, peppers stuffed with rice, wheat boiled with sugar and nuts, different types of cakes (cheese, pumpkin and soaked sweets) ) in syrup), some kolaks, many fruits and nuts like dried plums, dried apricots, oranges and tangerines and ‘oshav’ a compote of dried fruits.

It is traditional that the table is with all the food until the morning of Christmas Day. Some people think that their ancestors would like to eat something during the night!

On Christmas day, some families will have another great meal, but this time there will be meat, usually some type of pork.

After the Christmas Eve dinner, some people will attend a Midnight Mass service. You can also listen to Koledari (carol singers) who are usually young people singing Christmas carols dressed in traditional clothes. Singing can only begin after midnight. Singers often go around singing all night, so the sun never catches them! When they arrive at a house, they sing “the song of the house” praising and wanting the house. Having Koledari visit your home is for good luck. The songs are often divided into two parts: half of the singers sing the song and then the other half repeats it. After the singing, the head of the house will give food to Koledari to thank them for singing. Special foods include ‘Koledni gevreci’ (round buns) and ‘banitsa’ (a layer cake filled with cheese).

Christmas trees are now popular in Bulgaria and cities are decorated with Christmas lights. Some people will still have a traditional Yule record (usually an oak, elm or pear tree) known as “badnik” or “budnik” that is taken home on Christmas Eve.