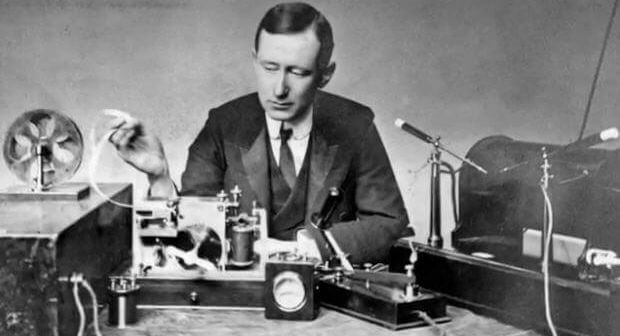 Guglielmo Marconi; Italian inventor : b. Bologna, Italy, April 25, 1874; d. Rome, July 20, 1937. His father was Giuseppe Marconi, a successful businessman and gentleman of independent means ; his mother, Annie Jameson, was the youngest daughter of Andrew Jameson of Ireland. In his early years Marconi was tutored on the parental estate ; later at Leghorn he met Professor Vincenzo Rosa, under whom he studied physics. He also became acquainted with Professor Augusto Righi of the University of Bologna, a pioneer in the study of electromagnetic waves. Marconi, however, was never a student at that institution or any other university.

While on vacation in the Italian Alps during the summer of 1894, Marconi picked up an electrical journal containing an article describing the electromagnetic wave experiments of Heinrich Hertz. From this he conceived the idea of using Hertzian waves for communications, and he returned to his home in Pontecchio eager to test the idea. Within several months (1895) he completed his apparatus and transmitted signals through the air from one end of the house to the other, then from the house to the garden. These experiments were in effect the dawn of practical wireless telegraphy.

Since communications at sea presented the greatest promise for development and use of the invention, Marconi decided to go to England (1896), where there was greater shipping activity. Using the Hertz radiator at the transmitter and the coherer developed (1890) by fidouard Branly as the detector at the receiver, he conducted historic experiments on Salisbury Plain, to which British Army and Navy officials were invited. Modestly, Marconi declared that his discovery was not the result of long hours of labor and thought, but of experiments with devices invented by other men, to which he applied certain improvements. First, he increased the effectiveness of wireless by connecting both transmitter and receiver with the earth, that is, grounding them; second, he used the vertical wire, or antenna, insulated from the earth, which was the more important of the two innovations.

In 1897, Marconi rigged up a new station at The Needles on the Isle of Wight, and in 1898 the first paid Marconigrams were sent by Baron Kelvin (William Thomson) to his friend George Stokes and to Sir William Preece, engineer in chief of the British Post Office, who was deeply interested in signaling without wires. Wireless now covered a distance of 18 miles. Encouraged, Marconi built a new station at Bournemouth. Shipping interests began to evince an interest in this new form of communication, and Queen Victoria invited Marconi to establish communication between Osborne House on the Isle of Wight and the royal yacht, Osborne. In March 1899 he flashed the first signal across the English Channel from France to the cliffs of Dover. He was then invited to the United States by the New York Herald, which arranged for installation of his apparatus on the steamship Ponce, from which bulletins were flashed on the progress of the international yacht races off the New Jersey coast.

The dawn of the 20th century found Marconi possessed with the idea of sending messages across the Atlantic. At Poldhu, on the southwest tip of England, he built a transmitter 100 times more powerful than any previous station, and in November 1901 he went to America to install a receiving station at St. John’s, Newfoundland. December 12, 1901 became a historic date in the annals of wireless when the 27-year-old Marconi received signals across the ocean from Poldhu. News of his achievement sped around the world, and he was acclaimed by outstanding scientists, including Thomas A. Edison, Michael Pupin, Charles P. Steinmetz, and Sir Oliver Lodge.

Marconi then turned his attention to the application of wireless to ships at sea, conducting historic tests from the steamer Philadelphia. Glace Bay, Nova Scotia, was selected as a site for a transmitter to demonstrate further the capabilities of the invention by transatlantic contacts with Poldhu. The scene then shifted to Cape Cod, Mass., and from a station built at South Wellfleet communication was established with England. An exchange of messages between President Theodore Roosevelt and King Edward VII, on Jan. 19, 1903, heralded Marconi’s “wonderful triumph of scientific research and ingenuity.”

Marconi next selected Clifden, Ireland, as the location for a 300-kilowatt station, and there he incorporated many new ideas and improvements which resulted from the earlier tests. So strong were the signals that Glace Bay and Clifden seemed but a short distance apart as thousands of words crossed the sea. Press and commercial service was established in the year 1907.

Wireless met its first big test in time of disaster at sea on Jan. 23, 1909, when the S.S. Republic was rammed by the S.S. Florida, 26 miles south of Nantucket Lightship. Rescue ships came from all directions, and only six lives were lost, although the Republic sank while the crippled Florida was towed to port. Three years later —on April 12, 1912—the S.S. Titanic, bound for New York City on her maiden voyage, crashed into an iceberg in mid-ocean, and its wireless frantically called for help as the SOS flashed from the masthead. From that day no one argued that wireless was just a dream or a toy, and honors were heaped upon Marconi as a benefactor of mankind. Previously, in 1909, his achievement had been recognized by the award of the Nobel Prize in physics, which he shared with Karl Ferdinand Braun of Germany, who pioneered in the development of the electron tube.

During World War I, Marconi was in Italy aiding the Italian Navy in communications. Wireless emerged from the war with new records of accomplishment, and Marconi, entranced by the possibilities of short waves, directed his experiments to that spectrum. He bought a yacht, which he named Elettra, equipped it as a floating laboratory, and established communication between the Mediterranean and Australia and other points around the world. From short waves he went to microwaves and, in 1922, demonstrated their possibilities, especially the directional effects and their application to radiotelephony. He predicted that a revolution in wireless was coming with the harnessing of tiny waves that would vastly improve worldwide communication. Beyond that he foresaw the possibilities of sending radiophotos and eventually pictures in motion—in other words, television.

Marconi continued his research and development activities, especially in the area of microwaves, but by 1935 his health was failing, and doctors ordered him to take a complete rest. Two years later the wireless that he developed startled the world with the news that Marconi’s “race of existence” had ended with tragic s»ddenness in a heart attack.